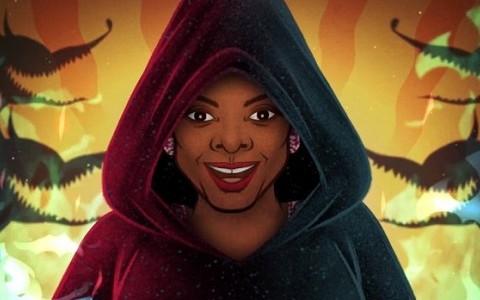 Hell hath no fury like a furry STAR WARS character scorned in this impressively twisted take on Marijuana Deathsquads’ great track that reminds me of early Ween.

The Pixies have returned with a modified line-up, and the video for their most recent track features brains, pentagrams and baby doll heads flying around in impressively-lensed cut-out animation. Good stuff!

When accosted by some angry shadow wolves, Sharon Jones recommends the title action in this lively, inventively animated video for an insanely catchy song.

The intro may be from “Alfred Hitchcock Presents,” but it’s PSYCHO that serves as just as much of an influence in this B&W video for Krule’s great garage track.

I’m not sure I would have picked Macauley Culkin as being the best child-actor-turned-performer-of-food-based-humorous-music since Billy Mumy, but I can’t really object to a band that does nothing but pizza-themed covers of Velvet Underground songs, if just for their inexplicableness.

A faux-recreation of an undiscovered 1977 grindhouse film, the video for Merendine’s metal track features the right amount of blood, female voracity and film pops to get the look down pat.

There’s witchery afoot in this creative period-set video for this moody track off of the first album for the Apostles, featuring The Cramps’ Chopper Franklin.

Rapper LastO goes into the mind of the serial killer in Chow’s intense short.

There’s a zombie apocalypse going on in the video for Maino’s rap song, but he and Jadakiss seem more interested in complaining about the decline of hip-hop.

WKRP in Cincinnati’s Herb Tarlek (EQUINOX’s Frank Bonner) has an army of clones invading Earth in this edition’s retro-video.