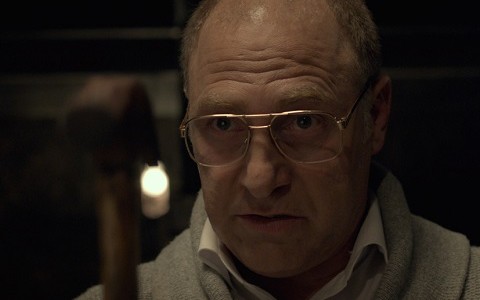 Three children—two girls and one boy—play hide and seek in the woods around an abandoned house. One girl enters the house and hides in an old wardrobe. The other girl hides in a piece of abandoned construction equipment where the boy quickly finds her. But when the door to the wardrobe is opened, the first girl has disappeared. All that remains of her is a bright red shoe. Shot in dreamy slow motion and featuring a pounding, ominous Bernard Herrmann-esque score by Haim Frank Ilfman, this is the striking opening sequence to BIG BAD WOLVES that the rest of the film is never able to live up to.

It seems that the little girl is the latest victim of a serial killer who rapes and tortures the girls before killing them. Micki (Lior Ashkenazi), the detective in charge of the investigation has a suspect in Dror (Rotem Keinan), a local schoolteacher. But lacking any evidence and being something of a meathead, Micki snatches Dror and tries to beat a confession out of him. Not surprisingly, this proves unsuccessful and Micki’s police brutality is captured on video for the world to see on YouTube. When the body of the girl from the opening scene is found, Micki is not only taken off the case, but fired from the police force.

With nothing left to lose and determined to see justice done, Micki kidnaps Dror with the intent of finishing his vicious interrogation and gaining a confession. Into this situation comes Gidi (Tzahi Grad), the father of the latest victim. Gidi has his own plans for torturing a confession out of Dror. After Gidi brings Micki into his scheme, the stage is set for a tense evening of pain and soul-searching as Dror continues to proclaim his innocence, Gidi’s grief-driven rage turns him into a monster, and Micki begins to wonder how far he is willing to go with Gidi’s scheme to learn the truth.

What this plot description fails to get across is the tone of dark comedy created by writer/directors Aharaon Keshales and Navot Papushado. While the discovery of a victim’s body is filmed and edited for disturbing reality, Micki’s clumsy attempts at playing a tough cop in the Bruce Willis mold are openly mocked by his superiors and Gidi. When Gidi’s mother keeps calling him, interrupting his attempts to torture Dror, the film moves from gruesome and uncomfortable to sitcom jokes in a heartbeat. Not all of these whiplash-inducing shifts in tone work—one sequence is distractingly set to Buddy Holly’s Everyday for no apparent reason beyond reaching for random laughter—but they do allow the film to set itself apart from the glut of other cinematic revenge tales of recent years that only seem interested in making the audience complicit in the onscreen violence.

Where the film stumbles is in the attempts of Keshales and Papushado to frame the story as a dark fairy tale. Beyond the title’s reference to Little Red Riding Hood, numerous allusions are made to Hansel & Gretel. These details fail to add anything to the film and left me feeling like the directors were sitting next to me in the theater, elbowing me in the ribs to makes sure I got the reference.

Eventually, Keshales and Papushado spend so much time forcing in unnecessary fairy tale elements, they neglect their characters. Micki, Gidi, and Dror are barely sketched characters easily broken down into the archetypes of hotheaded cop, grief-mad parent, and possibly guilty victim. Despite the tragedy of a child’s death that brings them together, they never register as more than just game pieces being moved around the board.

But what a game Keshales and Papushado have created. At times, the dialogue and scene construction feels sloppy and random, but by the third act, it becomes obvious just how tightly plotted the film actually is. It may suffer from a lack of recognizable humanity in its characters, but BIG BAD WOLVES is a cleverly put together suspense machine where the threat of violence hangs constantly overhead and the question of Dror’s guilt or innocence is teased out to the breaking point.

Keshales and Papushado have impressive visual chops and know how to plot out a clever thriller. Utilizing stellar work by cinematographer Giora Bejach and Ilfman’s impressive score, they milk the story for all the queasy thrills and comedy they can. If they learn to write characters worthy of their plotting, they will be a duo to keep an eye on.