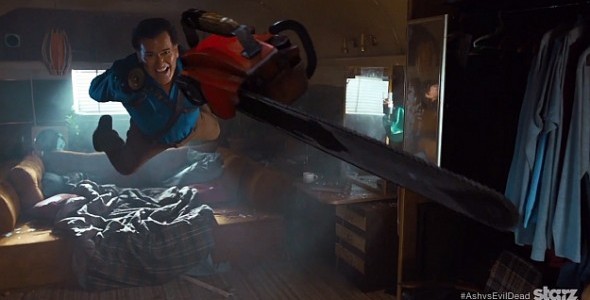 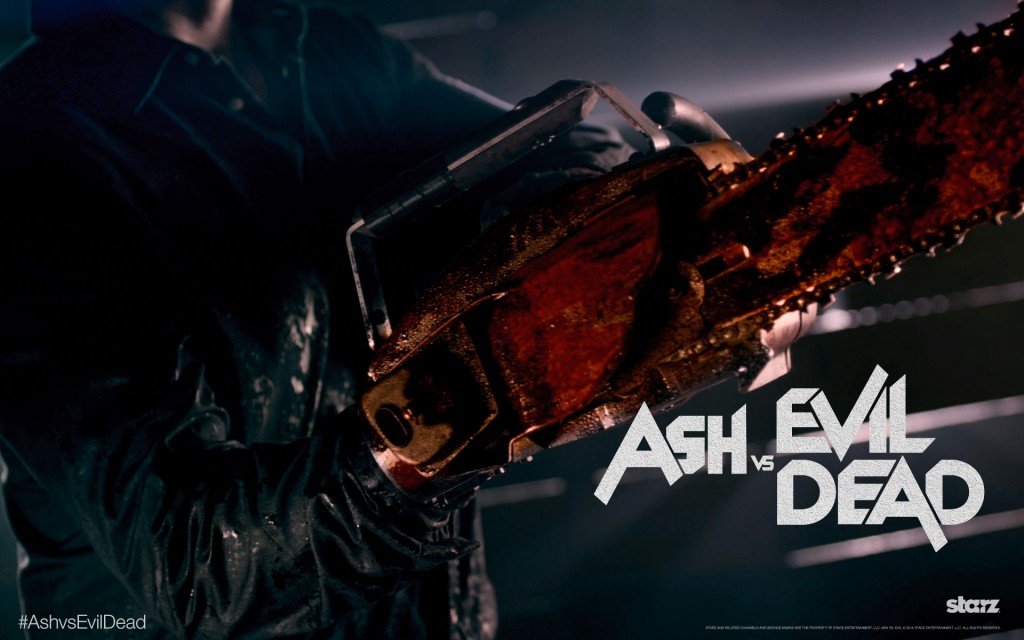 Hard to imagine that a low-budget gore fest released in 1982 would be the basis for a highly anticipated television series in 2015. Attitudes towards horror have changed though in the past thirty-years; what was once a cultish sub-culture has become beloved by everybody from weirdo VHS collectors to the most basic person at a Starbucks. AMERICAN HORROR STORY has been running for five strong years, THE WALKING DEAD is arguably the most popular show on television (aside from a Tolkien-esque gore fest) and more than a few teenager (and adults) will be AMC FEAR FEST and chilling for the next two weeks. October 30th marks the premiere of ASH VS EVIL DEAD, the new Starz series featuring Bruce Campbell as the inept Deadite-slayer/stockboy as he does battle across America with evil forces that he has unleashed…again. 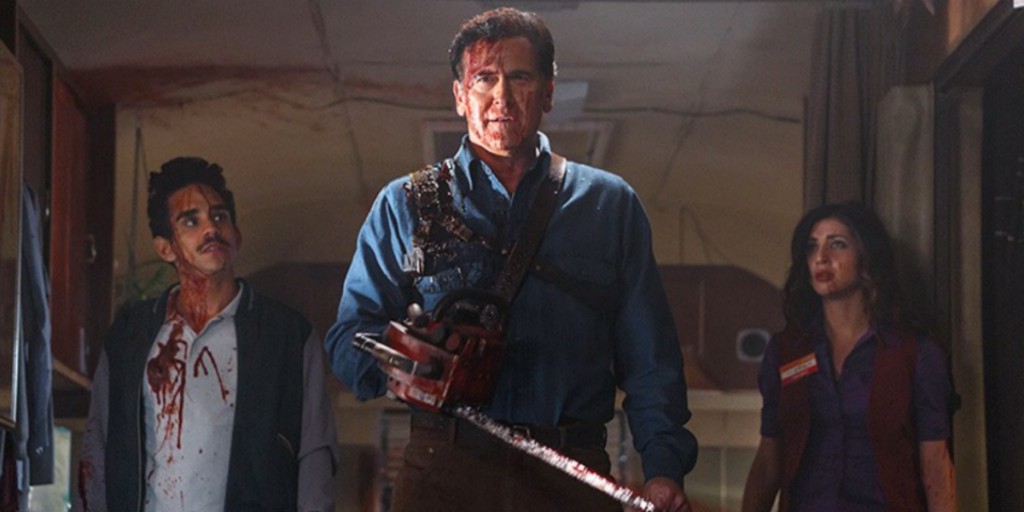 Bruce Campbell is back as Ash, sporting the same ol’ brown pants/blue shirt combo that the character has been rocking since 1982—along with scars on his face that may be prosthetic or simply the result of working with director Sam Raimi for as long as he has. Ash is a Value Stop stock boy by day (any references to ARMY OF DARKNESS are verboten as of now, until the series works out some copyright issues with Universal) and the coolest guy in the trailer park by night. When the latest iteration of Ash is introduced to the audience, he’s gearing up for a big night out at the local dive, putting on some Clubman aftershave and pocketing a couple Trojan Magnums.  Think of him as the Al Bundy of monster hunters, still chatting people up about those four touchdowns he scored in one game. It would appear that the character of Ash gets dumber with each adventure, and now, as an aging lothario, he is at peak stupid. 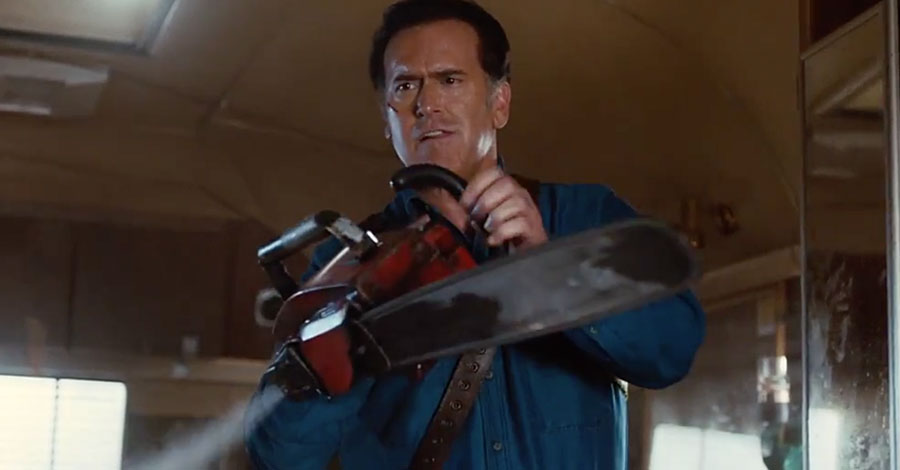 The premiere episode introduces us to a few of the supporting players in ASH VS EVIL DEAD. Amanda Fisher (Jill Marie Jones) is a detective who is thrust into the world of Deadites and demons in one of the episodes stand-out moments featuring some classic EVIL DEAD tropes (creepy houses, big winds, and lots, and lots of red stuff) as well as Pablo Simon Bolivar (Ray Santiago) and Kelly Maxwell (Dana DeLorenzo), two of Ash’s co-workers at the ValueStop who become his partners in monster-stomping by the end of the show. The look of the Deadites hasn’t changed much since 1982, and that is a pleasant surprise, especially since the show looks like it might delve into the mythology of where these monsters come from and what their mission is. 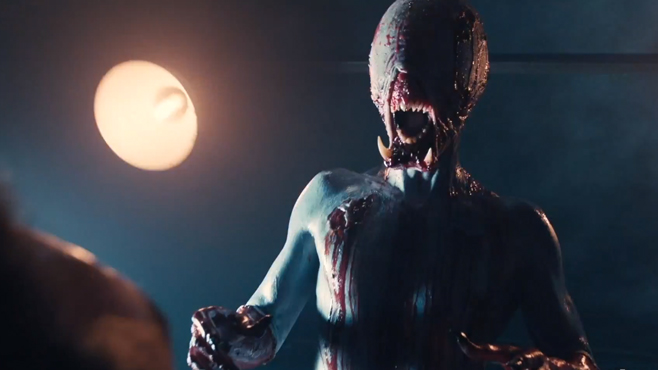 The episode retains the gory slapstick of the first three movies, no doubt due to Rami’s direction. ASH VS EVIL DEAD is taking more cues from the silliness of ARMY OF DARKNESS than the borderline sadomasochism of the humor in EVIL DEAD 2: DEAD BY DAWN. There is certainly more of an emphasis on comedy which should come as no surprise to the EVIL DEAD faithful as Raimi and Campbell were always more into The Three Stooges than horror movies. Ash has a hard time stocking some light bulbs and does battle with a possessed doll that recalls the mini-Ash segment of ARMY OF DARKNESS.  The humor is big, dumb, and loud; it hits the audience square on the chin like so many fists to Ash’s face. Raimi’s manic energy keeps the origin episode moving as Ash comes into his own –he’s pretty terrible at everything in his life… except fighting monsters. That’s where he excels. 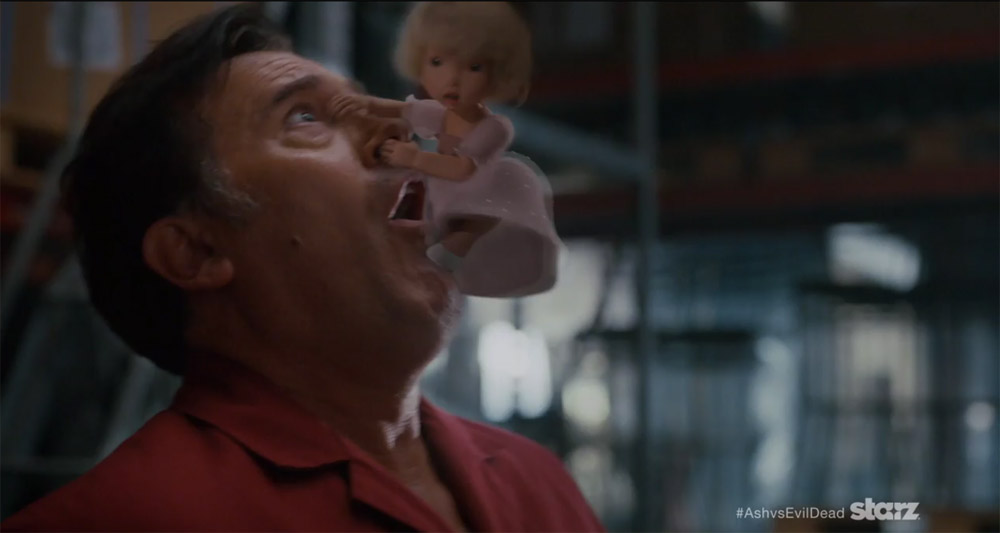 And that’s when the show excels too, and at a half-hour runtime, ASH VS EVIL DEAD never outstays its welcome. It’s great seeing Bruce Campbell back as our inept hero, but the supporting cast delivers some great performances that make the audience fall in love with them as well, particularly Ray Santiago as Ash’s new protégé, Pablo. Raimi did a solid job of laying the groundwork and setting the tone for what’s going to come over the next few months. If the premiere is any indication, ASH VS EVIL DEAD is going to be a lot of fun for fans of horror and slapstick alike. 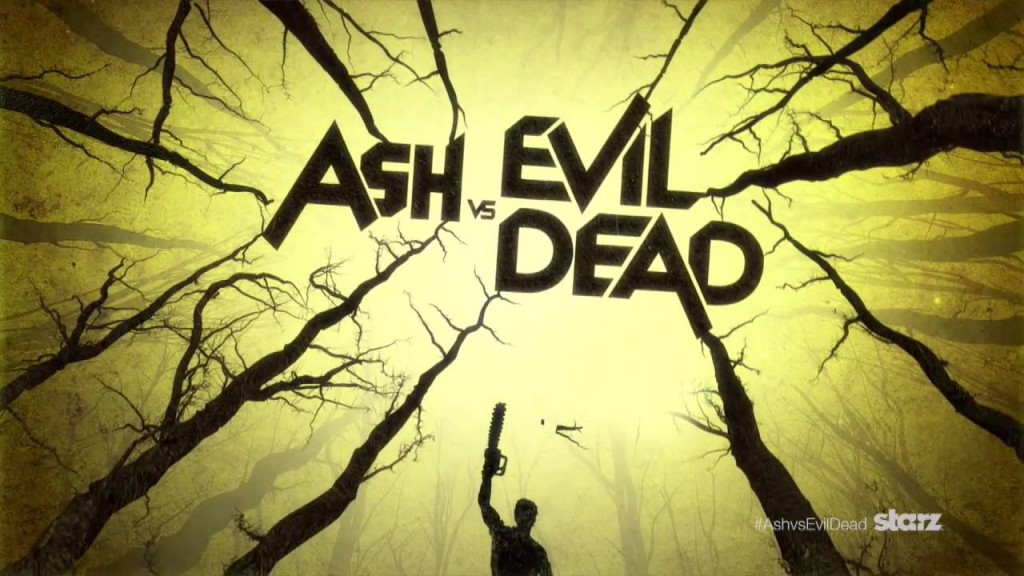