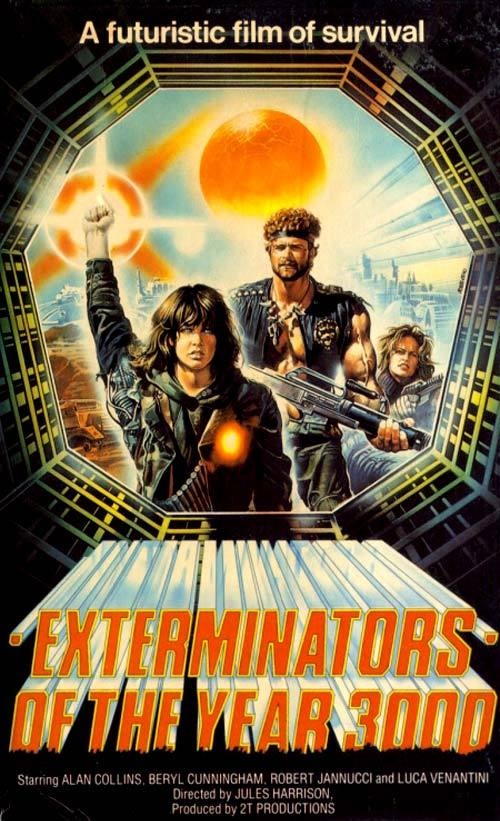 Let’s face it — by 1983, the Italians were running short on cool names for characters in their low-budget, post-apocalyptic ROAD WARRIOR knock-offs. Memorable handles like “Scorpion,” “Parsifal,” and “Trash” (a name so good it was — uhhhmmm — recycled here, but more on that in a minute) had already been used in THE NEW BARBARIANS, 2019 : AFTER THE FALL OF NEW YORK, and 1990: BRONX WARRIORS, respectively, so by the time director Giuliano Carnimeo and his producers were able to hustle up enough financing to shoot their modest little Italian-Spanish co-production EXTERMINATORS OF THE YEAR 3000 (which also saw release in some markets, both theatrically and on home video, under the rather more lackluster title of DEATH WARRIORS), they were down to “Alien” for a snappy one-word monicker for their loner hero.

And it’s always gotta be a loner hero for these type of flicks, doesn’t it? A guy who’s survived the end of the world and everything that came after on his own. Maybe he’s lost some loved ones along the way and eschews human attachments because he’s afraid of letting anyone get close to him again. Or maybe he was part of some warlord of the wasteland’s band of savages but reformed his ways when he was forced to kill women and children or something and he’s atoning for past sins by leading a quiet, solitary life. Or maybe, as is the case with Alien, none of that shit really matters because by this point the filmmakers have figured out that character backstory isn’t what the audience for these things is here for and as long as their leading man is sufficiently stoic and can survive a lot of souped-up dune-buggy, souped-up motorcycle, and souped-up muscle-car battles, that’s all that really counts. The only thing that sets Alien apart from his contemporaries in this sub-genre, frankly, is his stupid name and frizzy hair.

The loner, though, can never remain alone for long, can he? The poor schmuck is always roped into some battle-not-of-his-own making, and his job is to lead his newfound people to victory — which usually means either water or gasoline. In this case it’s water. When Alien makes the acquaintance of a young boy named Tommy (Luca Venatini), a pre-teen  with a robotic super-arm and a pet gerbil who sets out to complete a quest to find H20 for his rag-tag band of barely-survivors that his father started but wasn’t able to complete (at least not in time — he’s missing, presumed dead, and folks are gettin’ thirsty, so hey — why not send the kid?), the strings of his hardened heart are tugged by the tyke’s courage and he can’t help but do the right thing and join the precocious little whippersnapper because, well — doing the right thing is just what guys like Alien do, right?

On the plus side, Tommy definitely knows the location of a well. On the minus side, the irradiated desert between where they are now and where they need to get to is controlled by a psychotic biker-gang leader named Crazy Bull (Fernando Bilbao) and his — well, you know, gang of psychotic bikers. Post-nuke hijinks are, needless to say, sure to follow. Life can’t be easy in the year 3000, or we don’t have much of a movie here. To make a long story short — or, in this case, a short story even shorter — Tommy gets captured by Crazy Bull’s men and is interrogated and tortured, because that lets us know that Crazy Bull is such an evil bastard that he’s willing to torture kids. His robo-arm gets busted up pretty good in the process, but Alien’s able to rescue him and they fix up his mechanical limb  with parts they find in a junkyard — where they also cross paths with Alien’s old flame, Trash (or, as we’ve already established, Recycled Trash), played by semi-popular Italian beauty Alicia Moro.

She, of course, tags along on their noble quest to defeat Crazy Bull’s men by besting every — what was it again? — souped-up dune-buggy, souped-up motorcycle, and souped-up muscle-car they can they can throw at them. In its favor, EXTERMINATORS OF THE YEAR 3000 features pyrotechnics and stunt work that are at least  equal to, and in some cases better than, some of its more-well-known fellow travelers in the Italian post-armageddon sub-genre. While most of Carimeo’s direction is fairly point-and-shoot and certainly lacks the style of, say, an Enzo G. Castellari, functional ain’t so bad  when it comes to telling this type of straight-forward story.  If you’re reasonably entertained by the average spaghetti-flavored take on rough-and-tumble nuclear holocaust survival (and I admit that I am), then you’ll be reasonably entertained by EXTERMINATORS OF THE YEAR 3000. 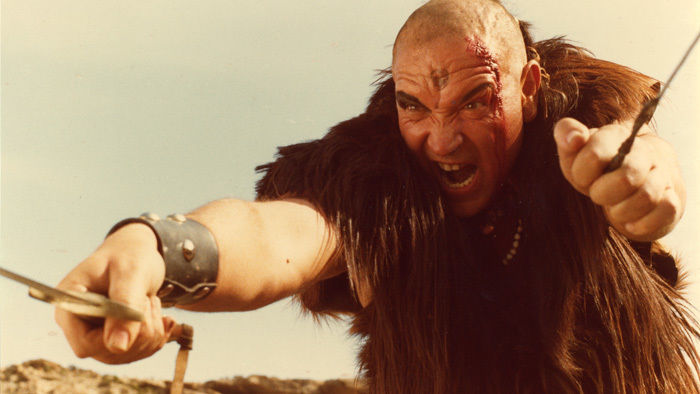 In the “minus” column in its ledger, though, is the cold, hard fact that there’s not much on offer here that isn’t tackled with more style, more bravado, and frankly less sanity in flicks like THE NEW BARBARIANS, which veer into the territory of completely uninentional self-parody in their finer moments. Simply put, this flick just isn’t bad enough to be all that terribly memorable. By 1983, the Xs and Os of how to do a movie like this were so firmly established that all Carnimeo and his cohorts  had to do was essentially go through the motions, and you definitely get the feeling that’s really all they’re really up to here. Even Detto Mariano’s music, while certainly almost bafflingly over-the-top and weirdly out-of-place in comparison with what’s happening on screen in all but the film’s action sequences, lacks the dramatically bizarre aplomb of, say, the famous “Oliver Onions” score for 2019 : AFTER THE FALL OF NEW YORK. 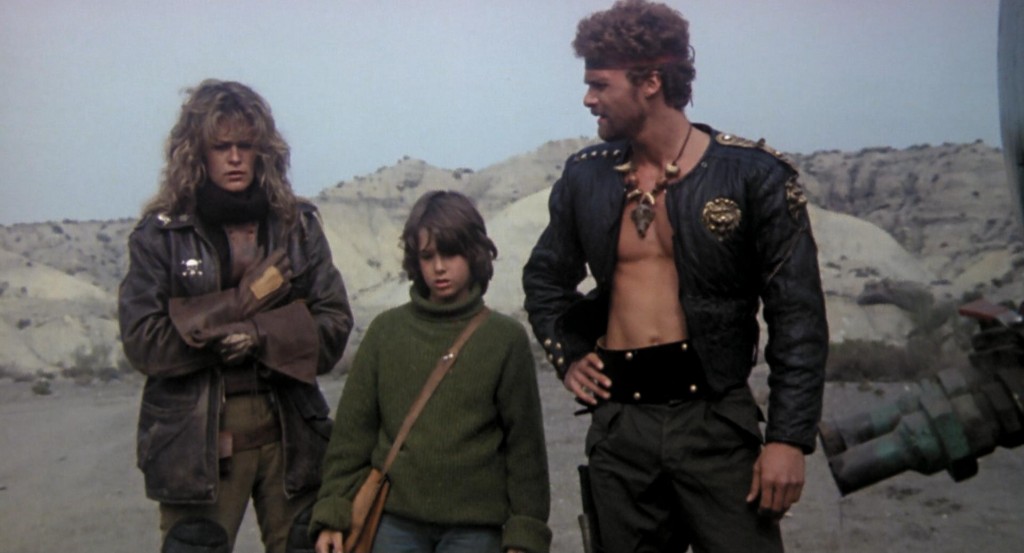 Still, what the hell — EXTERMINATORS OF THE YEAR 3000 is worth at least one watch, and Code Red has done a pretty nice job with its DVD release. It’s presented full-frame (and looks good) with stereo sound (which you need to crank way the fuck up in order to make out most of the dialogue) and extras include the original trailer, an on-camera interview with star Iannucci, and a feature-length commentary with Iannucci that’s fairly involving throughout and generally doesn’t lag too much, even in the spots where his memories aren’t necessarily the sharpest. It’s out of print — hey, it’s Code Red — and generally retails for around $50-60 if you can find it, so it’s certainly not worth that kind of price for anyone other than the most rabid hard-core genre completists.

A better option, assuming you’re Blu-ray equpped, is to go with the more-recent Shout! Factory Blu-ray release, as it “ports over” all the extras from the Code Red disc and looks much more sharp and clear. If you want to spend nothing, then hey — if you’ve got a friend who pops it into his or her DVD or Blu-ray player while you’re over at their place, then you might as swell sit back and enjoy it. At the very least, it’s got some of the worst dubbing you’ll see this side of an Indonesian flick, and the movie is capable of instilling the kind of warm, nostalgic — albeit fleeting — glow that you can only get from the product of a simpler time, when we all thought living through a nuclear war sounded cool and adventurous. 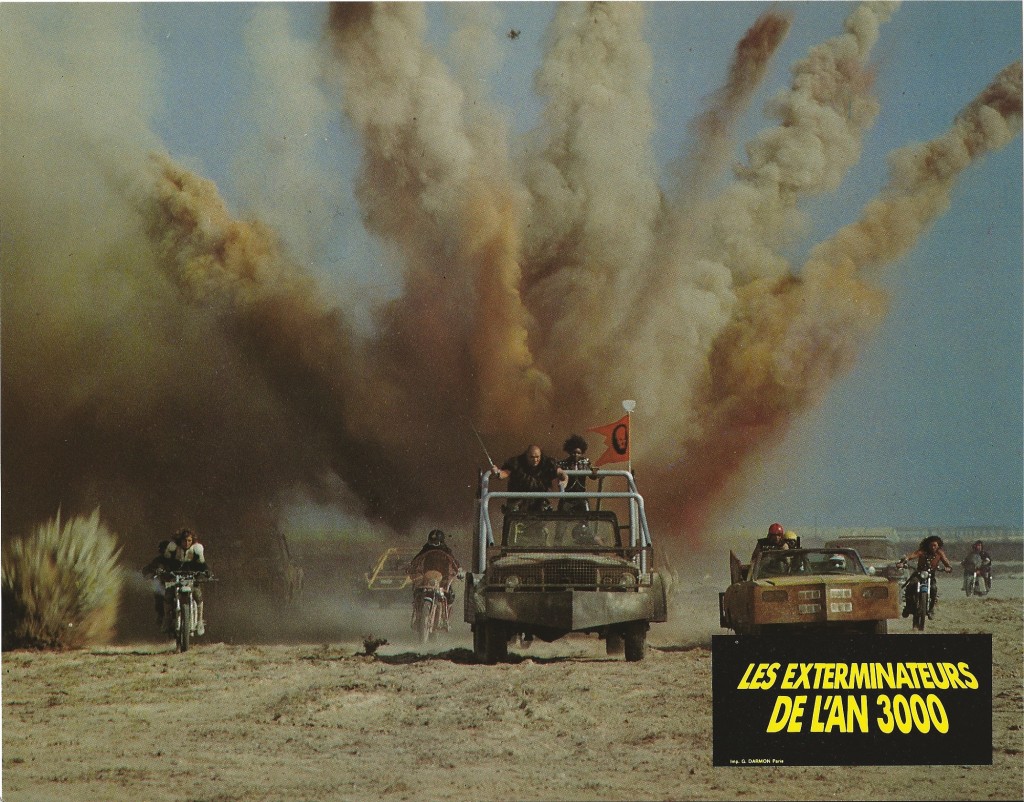