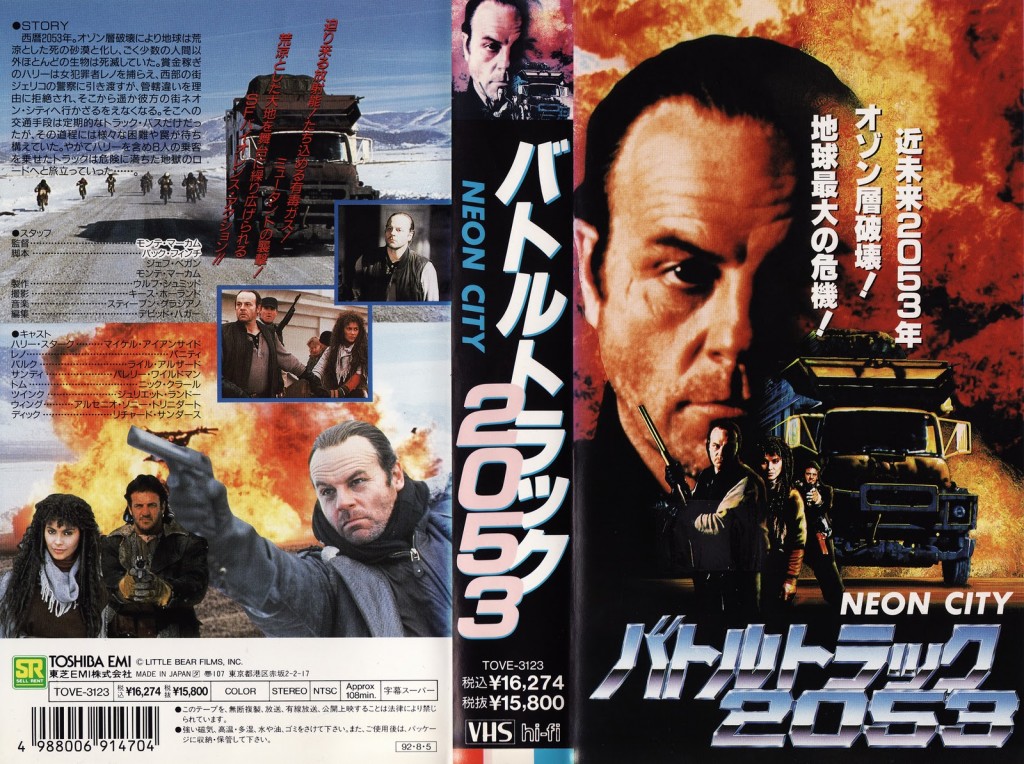 When it comes to satisfying your thirst with some post-apocalyptic refreshment, you’ve got a lot of options at your disposal in today’s modern, go-go, crazy, MTV world.  You could grab one of the old standbys, available at every self-respecting purveyor of genre trash across the nation, like MAD MAX or A BOY AND HIS DOG.  You could go with an import if you’re in a more travelling mood, and pick up an AFTER THE FALL OF NEW YORK or 2020 TEXAS GLADIATORS.  You could even go with one of those new microbrews that have sprung up recently in order to build up your hipster cred, like YOUNG ONES or STAKE LAND.

Yeah, there’s no end to choices to be made.  Hell, you can go to one of them streaming establishments and get every type of post-apocalypse flick under the sun, where the guide to the establishment runs just a little bit longer than a pointless thinkpiece about  FURIOUS 7.  It’s a brave new world out there for the post-apocalypse film aficionado, if that’s the sort of thing you’re into.

And you can have all the choices you want.  As for me, when I want a crisp, clean, refreshing post-apocalypse movie that really quenches my thirst after a long day at work, I’ll go for a good American classic.  Give me a pint of NEON CITY any day of the week. 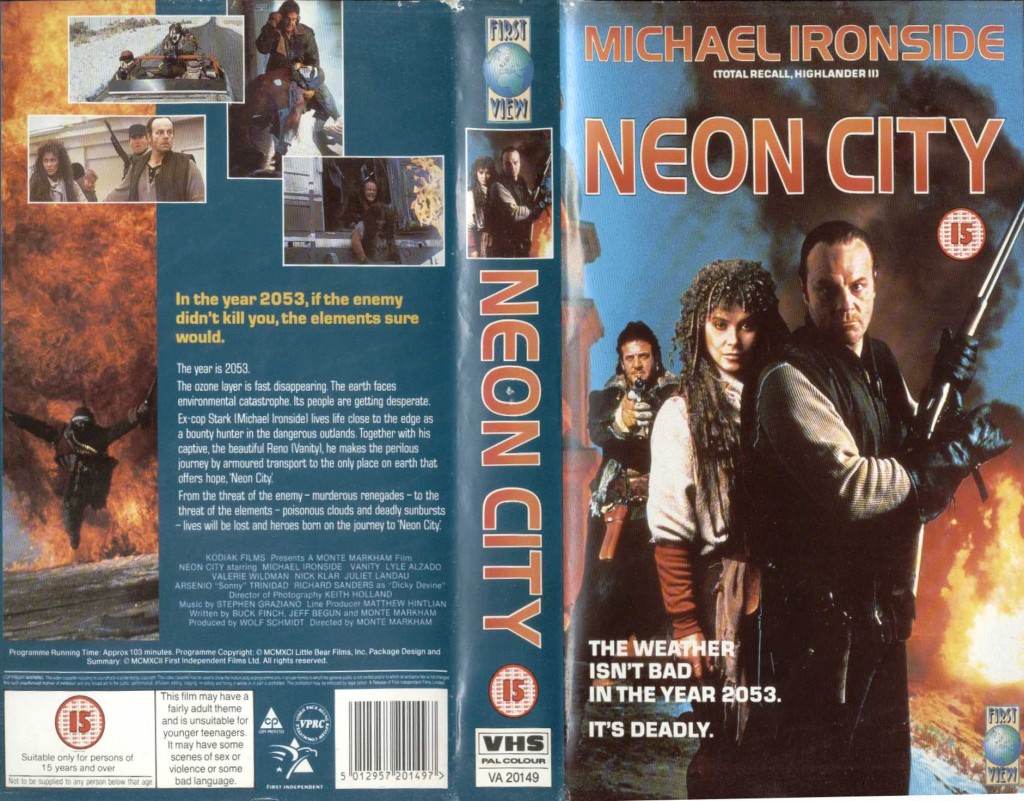 Now, NEON CITY ain’t like a lot of the post-apocalypse flicks favored by the city folk in their ivory towers.  It’s not all glossy and full of amazing special effects like your OBLIVIONs or intent on deep meaning like your SNOWPIERCERs or something for the young folks like your HUNGER GAMESes.  It doesn’t have trashy dubbing and impressively weird sequences like your fancy Italian imports, hell, it doesn’t even have the prestige of being a classic, like your THE WORLD, THE FLESH AND THE DEVILs.  It’s just a good, standard ale, a darker brew than most but one with its own flavor combinations that really make it feel comfortable. 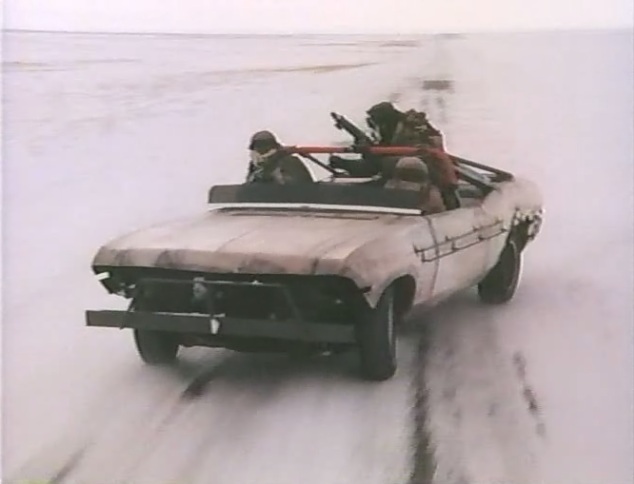 The second film of actor-turned-director Monte Markham after his 1988 WARGAMES rip-off DEFENSE PLAY, NEON CITY’s story takes place in 2053, after a catastrophic event that’s caused much of the world to become very cold, with the exception of a few instances of random sunlight magnifications that essentially fry you if you happen to be standing outside.  The introductory line is about dog-eating, just to warm you up for the type of smoky flavoring you’re about to imbibe in.  We start with a familiar scent as bounty hunter Harry Stark (Michael Ironside, playing a rare lead role in a non-Canadian concoction) taking his most recent prey Reno (Vanity) to a locale that seems present in every post-apocalypse film, a dingy, ramshackle collection of tents and vendors that resembles a local cultural festival having been doused in urine, dust, and discarded Vic-20 parts.

Stark is told that his quarry has to be returned to the titular town, an enclosed paradise several days away.  The way there, however, is a treacherous path of MAD MAX-esque biker gangs called Skins, the aforementioned sunlight magnifications (called “brights”), poisonous toxic gasses and generally a greatest hits package of every other post-apocalyptic draft.   Despite his best efforts to the contrary, Stark and his prey end up riding as security on the last transport out of town, where the toilet is barely functional, water resources are grim, the other passengers may be serial killers and there are frequent stops as things start breaking down.  It is mildly better than riding a Megabus.

The bus is driven by Bulk (he is played by ex-football pro Lyle Alzado, so the name isn’t one of your fancy ironic monikers), a former partner of Stark’s whom he turned in after killing someone in a barroom brawl.  The rest of the passengers are a cavalcade of good, standard archetypes played by reliable character actors, pitched a little bit more darkly than normal.  Valerie Wildman plays Stark’s ex-wife, who is now working as a high-priced prostitute.  Richard Sanders, “WKRP”’s bowtied newsman Les Nessman, plays a terrible stand-up comic who moonlights as a black-market suicide-drug salesman.  Arsenio “Sonny” Trinidad plays an older Asian man who may have accidentally doomed the world.  There’s also a drug addict posting as a doctor who kills people for no discernable reason other than he likes playing with drugs.  Like I mentioned, it’s got a pretty grim favor profile. 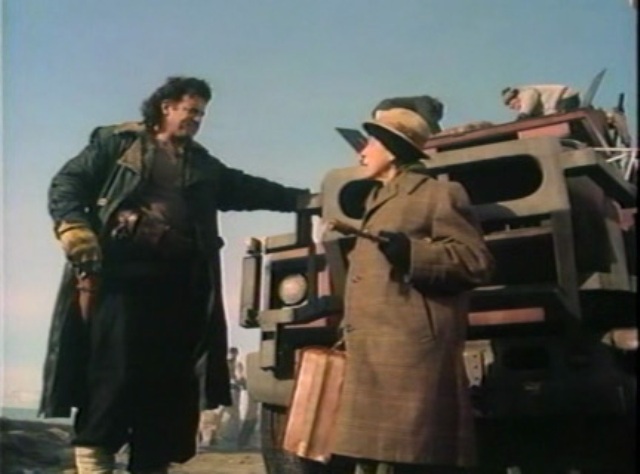 On the more optimistic side comes Juliet Landau, in her first major role, as heiress Twink Talaman, introduced as the moody, solid score suddenly becomes the background for a zany screwball comedy about a group of ragtag ruffians who show those old country club brats what for.  It’s an oddly fruity turn for such a balanced elixir, one that it occasionally returns to – it’s not that the film is humorless otherwise, and when the humor comes from the characters, like Reno’s absent-minded nose-picking in Twink’s general direction, it resonates quite nicely and gives fine mouthfeel.  Only when they force the humor does the cool concoction reek of room temperature swill.

(I’d like to take a moment away from this questionably-conceived concept piece to delve into the enigma that is Juliet Landau.  I wouldn’t exactly call what Landau does in NEON CITY or in any of her other appearances “acting” – she does recite lines from a script, using a vague approximation of what aliens would think emotions are had they never met a human while a camera is pointed in her direction, so I guess I’ll allow it.  I mean, in NEON CITY, she’s out-acted by a former defensive end for the Denver Broncos and a Prince back-up singer.  But Landau, despite not really being much of a performer, is fascinating to watch on screen, be it here, as “Buffy”’s Drusilla or as Loretta King, the liquid-excising star of BRIDE OF THE MONSTER in Tim Burton’s ED WOOD, simply because she’s got a very specific look and you honestly have no idea what sort of inflections the next sentence she says will have.  I don’t really think her performances are any good, but they’re just captivating.  She’s like the COOL WORLD of people.)

((Of course, Mark Wahlberg has an Oscar nomination.  What the hell do I know? ))

(In NEON CITY, Landau’s character has gone through life sheltered, coasting on the abilities of her more successful father.  Go figure.) 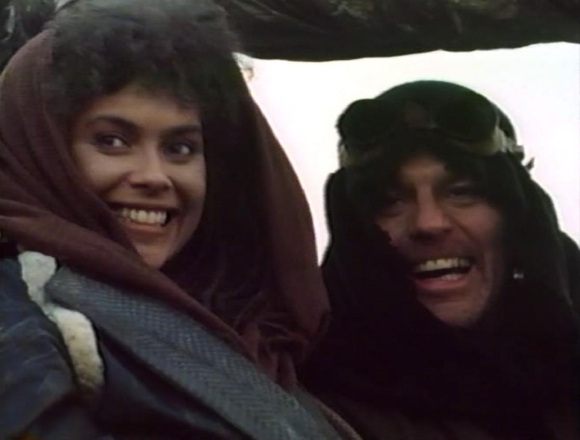 If this all seems a little familiar, that’s understandable, as like most great post-apocalyptic ales, it takes its process from a vintage recipe – in this case, John Ford’s STAGECOACH.  NEON CITY is a traditional brew livened up with some futuristic flair, given a smooth aftertaste thanks to some reliable veteran actors and a potent strain of general misery.  It’s a wonder that the ending is as upbeat as it is, but it works, resulting in a libation that, even if it’s got a fair share of grim ingredients – families of three looking for suicide drugs to end their misery, two attempted rapes, a character with a backstory involving a child sex slavery ring, goes down easy, the way a good, reliable post-apocalyptic pilsner should.

So you can have your MAD MAX meads and your DOOMSDAY double bocks, your ENDGAME ESBs and your I AM LAGERs.  I’ll stick with the hearty reliability of NEON CITY, a full-bodied film just competent enough to be entertaining, just dark enough to be serious, and offering a welcome chilled twist on a well-established tradition.  I don’t know if I can fully explain the appeal of the film in any kind of hoity-toity reviewer talk, but every time NEON CITY pops up on the television, it just removes “no” from my vocabulary for the night.