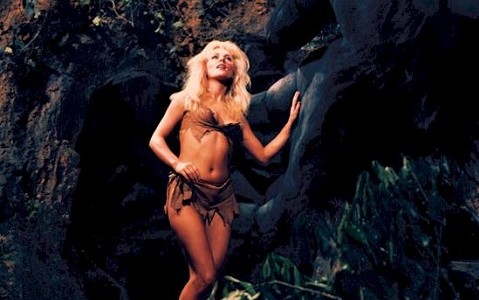 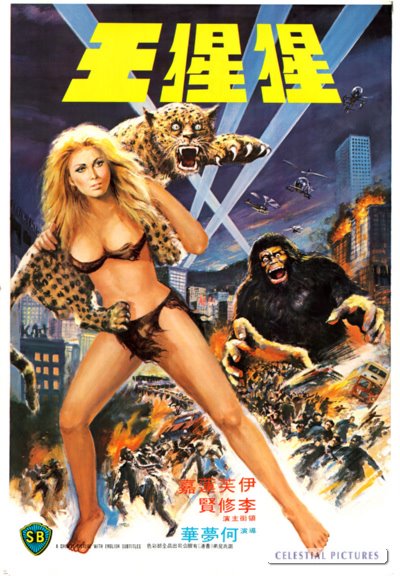 MIGHTY PEKING MAN is a unicorn. I mean, speaking literally, Mighty Peking Man is a gargantuan ape-like monster, not a pretty horse with a golden horn. That’s “unicorn” in the metaphorical sense; a rare and wondrous sight with little connection to the laws of physics and nature, the kind you only really hear about in legend. Speaking literally, some of the magic is lost in translation.

MIGHTY PEKING MAN is what happened when Hong Kong’s prolific Shaw Brothers Studios, best known for their run of kung fu epics, tried to cash in on the [financial, if not artistic] success of the 1976 remake of KING KONG. Like Roger Corman, the Shaw Brothers in their heyday produced terrifically memorable cult items and monumentally inept and bizarre abominations, in equal proportions. MIGHTY PEKING MAN falls into the latter category. Arguably. Because for a while, its insanity is blissful.

In the beginning, a small village deep in the Himalayan mountains is demolished. It seems like an earthquake at first, but it isn’t. 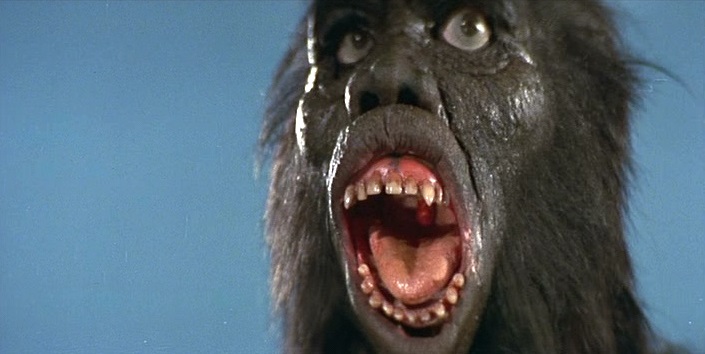 Cut to: Hong Kong. A team of adventurers, led by a greedy business-type and guided by the intrepid alcoholic Johnny (Danny Lee, who later appeared in CITY ON FIRE and THE KILLER), heads to the Himalayas with a small army of native sherpas in order to get a glimpse of the legendary Peking Man. Along the way they have adventures with animals. You know how the hunters in KING KONG encountered dinosaurs? Well, that was nothing. Piddly lil’ 1933 stop-motion dinosaurs, them fellas. In 1977, we have state-of-the-art monster effects. We have rear-projected elephants!

That doesn’t seem like a big deal, and it isn’t, but once your guard is down this movie hits you with the genuinely exciting and nerve-wracking spectacle of an actual jungle cat pouncing on one of the native guides and biting the man’s leg off . The production creates the innovative effect by swapping out the two-legged actor with an actual amputee and slapping red paint on his stump. 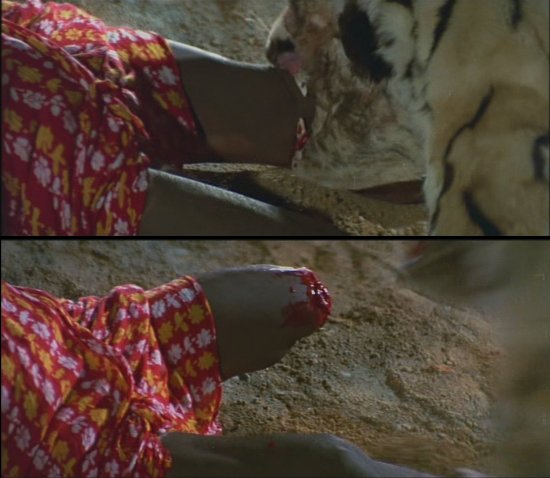 As the party heads deeper into the wilderness, Johnny becomes separated from the others, and eventually encounters and falls in love with the feral, incommunicative, yet incongruously bodacious and upbeat Samantha (Evelyne Kraft) – picture a lady Tarzan in constant danger of a nip slip – a romance which doesn’t go over well with Mighty Peking Man, who, it turns out, found Samantha in a plane crash when she was very small, and has raised her since childhood. How a gargantuan ape ever taught a beautiful young woman the art of applying rouge and eyeliner is a mystery that the movie is unwilling to explain. Anyway, my man gets a little over-protective.

But we’ve seen this story before: The beauty has a calming effect on the beast, but only for so long. The rest of the hunters return, managing to subdue the mighty beast, and transport him back to Hong Kong where he is bound to become a media sensation… for about five minutes before he breaks loose and goes on a rampage. You’ve never seen toy cars stomped upon with such a fury.

It’s hard for me to overstate how dramatically inferior MIGHTY PEKING MAN is to any other version of KING KONG ever made, yet at the same time, it’s infinitely more hysterical than any of them. For one thing, you’ll never see a more atrocious gorilla costume in a kaiju film. Well, costume(s) plural! Mighty Peking Man doesn’t even have a consistent appearance from shot to shot. Scroll up through the provided screen shots to see what I mean. 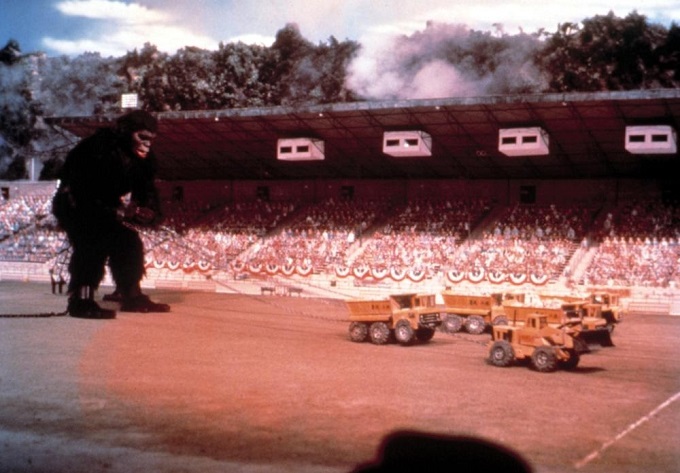 If you can tear your eyes away from the title character, they’ll probably be directed next to Evelyne Kraft as Samantha, who, visually appealing as she is, gives a non-self-aware performance for the ages. No woman has ever been quite so aggressively acrobatic while being so close to losing her bikini. And no woman has ever appeared so maniacally enthusiastic about appearing this close to this many deadly jungle cats.

One thing that allays those concerns is the fact that pretty much all of the jaguars and leopards in the movie look to be severely stoned. My educated guess is that the ASPCA was not consulted during the film-making process. PETA reflects back on this movie with a cold shudder. And all of that happens while the movie is fun. I can’t say that lasts all the way through. The thing with MIGHTY PEKING MAN is that you need to stop watching it after the first 45 minutes or so – first because it’s not healthy to laugh that hard for that long, second because its latter half takes an unfortunate dip into unintended sadism that isn’t fun even ironically. The monster gets set off because he sees a guy slapping Samantha, which is weirdly dark and troublesome to begin with for such a silly movie, and her sustained misery and despair as the entire Chinese army shellacks her adoptive parent becomes very unpleasant to watch very fast.

But for that first stretch, man – hoo boy. Take me down to belly-laugh city. 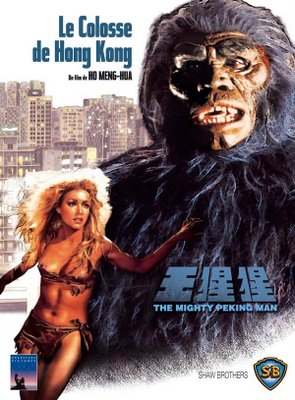 I first discovered this one thanks to Quentin Tarantino’s short-lived Rolling Thunder DVD label, which I sorely miss and pray one day returns. In the meantime, it’s still out there in circulation on DVD in this chimera edition. Happy hunting!