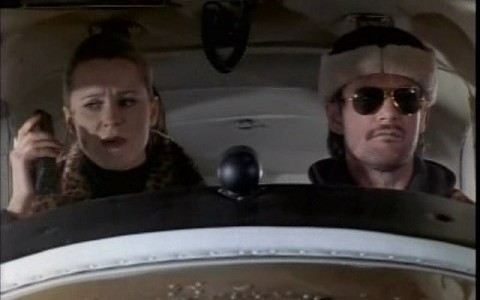 Join us for our year-long celebration of the USA World Premiere Movie in conjunction with Made-for-TV Mayhem! Check out out previous entries on THE FORGOTTEN here and MURDER BY NIGHT here!

With only a few exceptions, every television movie family falls under one of three categories:

The family at the center of THE TICKET is the third one. Living in a ramshackle house in a small town somewhere in rural Utah, the three-member Reicker clan of mom, pop and teenage ski enthusiast son is destitute. Mom Ceecee (Shannen Doherty) works as a clerk at a local Ace Hardware store and Dad Keith (James Marshall) flies charter planes for a company that doesn’t seem to be making any money, and between them, these one-time high-school sweethearts don’t make nearly enough to make ends meet.

When the car gets repoed, it’s the last straw for Ceecee, who’s sick of her hubby’s drinking and ridiculous reliance on his crappy job. (As played by Doherty, she’s given perennial bitchface, so it’s a bit hard to understand what exactly would put her in a good mood.) Getting an offer to work at another Ace in Spokane, she jumps at the chance and throws the bum out.

To be fair, Keith is a pretty impressive loser. He’s so much of a loser that he can’t even play the lottery correctly, and during his post-breakup drinking binge, he happens to notice that the lottery ticket he bought four months ago is, in fact, a winner worth 23 million dollars. It’s perfect timing to get his family back, though you kind of figure that this whole relationship could have been salvaged had he bothered to check his pockets more than once a season.

But then we wouldn’t have THE TICKET, whose generic title belies that the film was made near the end of the age of USA World Premiere Movies. THE TICKET has a standard set-up and some TV talent a few years past their most notable roles, and it’s directed by USA regular Stuart Cooper (whose career highlight is 1977’s oddball all-star cast zen thriller THE DISAPPEARANCE), but much of it feels sloppy and rushed, as though the budget was used up on a few effects and the rest of the film had to be completed without much precision.

The duo have to redeem the titular ticket on the following Monday, so they borrow one of the planes from Keith’s company and take a big family trip with Denver as their final destination. Unfortunately for them, Keith’s unscrupulous co-workers know about the ticket and rig the plane so it runs out of gas, causing the family to crash land in the mountains in the middle of a blizzard.

The blizzard itself is one of the rush jobs I’d mentioned. Much of the film doesn’t look so much like a “blizzard” as it does a “mild January in Wisconsin,” and their problems with trekking though the muck and pretending that they can barely see in front of their faces don’t really come across. Now, I’m not expecting THE GREY out of a made-for-TV movie, but the film is much less convincing than any given ‘70s-era survivalist TV flicks, and there’s no reason a film from 1997 needs to compare unfavorably to 1969’s SEVEN IN DARKNESS in terms of effects.

Anyway, the trio survives and the co-workers and an old guy named Watt (Al Mancini) whom we know is bad because his cabin has a Confederate Flag try to hunt them down to steal the ticket. After making their way to an abandoned weather station and then burning down one of the buildings because they’ve made a campfire IN THE MIDDLE OF THE ROOM, the good guys and bad guys face off. It’s not much of a spoiler to say that the “good” guys win, and everyone learns the valuable lesson that while money is no substitute for love, a LOT of money can serve as a pretty good incentive to fake it.

The lead characters spend much of the movie brooding or arguing, so there’s not much to root for. INVISIBLE MOM’s Philip Van Dyke makes for an affable youngster, but he’s not really given much personality other than “he enjoys skiing and feels his dad is neglectful.” Even worse is the one climactic moment when his life is in danger, which is bungled so badly in the editing that it appears as though he’s calling for his dad while simultaneously passed out face down in a river. Kids in peril + bad editing = unintentional hilarity.

Swedberg is probably best known for playing George Costanza’s doomed fiancée Susan on “Seinfeld,” and she was about a year removed from that memorable character when THE TICKET aired. And her performance in THE TICKET is about as far from Susan as you can get – where Susan was intentionally likeably bland, Swedberg’s portrayal of vindictive co-worker Rita in THE TICKET is a furious fireball of venom, the Lady Macbeth of the survivalist TV-movie.

Oddly, the viciousness of her character doesn’t show up until after the crash, when she and her cohort and love slave Chuck (John Tench) begin hunting the pair. It’s a strange choice, as the fact that Keith’s co-workers will turn against him for money isn’t a twist so much as the whole plot of the movie, so it would have been nice to see the pair actually make the decision to go postal for the sake of cash.

In any case, we still get several good minutes of great over-the-top mean-spiritedness. Rita is the type of woman who would use a cigarette holder to light up in the middle of, as we’ve mentioned, a blizzard-laden mountaintop. She thinks nothing of checking her make-up before the kill, and mentally tosses Chuck around like a sack of meat in a slaughterhouse, spewing lines like “No more waiting for the mail to be opened” in anticipation of the money. I have no idea what that’s supposed to mean, but Rita does seem like the sort that would have someone open mail for her because envelopes are gross.

“My hands are all sweaty just thinking about touching it, caressing it,” she purrs, and you’re right with her. Unrepentant and singly determined, it’s like if Cruella DeVille suddenly showed up in a particularly dramatic episode of “Doug,” and THE TICKET is all the more entertaining for her presence.

Still, you have to stick your way through a lot of filler to get there. There are a couple of cute bits, such as Keith’s bartender having a pillow and blanket at the ready for him to spend the night, but much of it is spending unconvincing times with characters who are basically only sympathetic because someone is trying to kill them. And when Swedberg is on the other side of the trigger, it’s a tough call to make.