The name Rudy Ray Moore is a mainstay in the minds of any self-respecting psychotronic household member, as the star of DOLEMITE and DISCO GODFATHER is certainly well-represented on our DVD shelves, even in the form of the lackluster transfers provided by Xenon Home Video.  But Moore’s ascendency into cult icon didn’t emerge from nowhere – he had built a reputation as a comedian by releasing several “party records” in the early ‘70s before launching his most famous character, Dolemite, to the big screen in 1975’s similarly-titled epic of fuckin’ up motherfuckers that still plays midnight screenings and packed basements today.

Moore was far from the only African-American comedian from the ‘70s who struck it big with party records.  The format, influenced by the likes of Redd Foxx and Godfrey Cambridge, also launched the careers of duo Leroy and Skillett, Reynaldo Rey and Norma Miller, who made filthy albums for black audiences that would make any given “Aristocrats” joker blush. 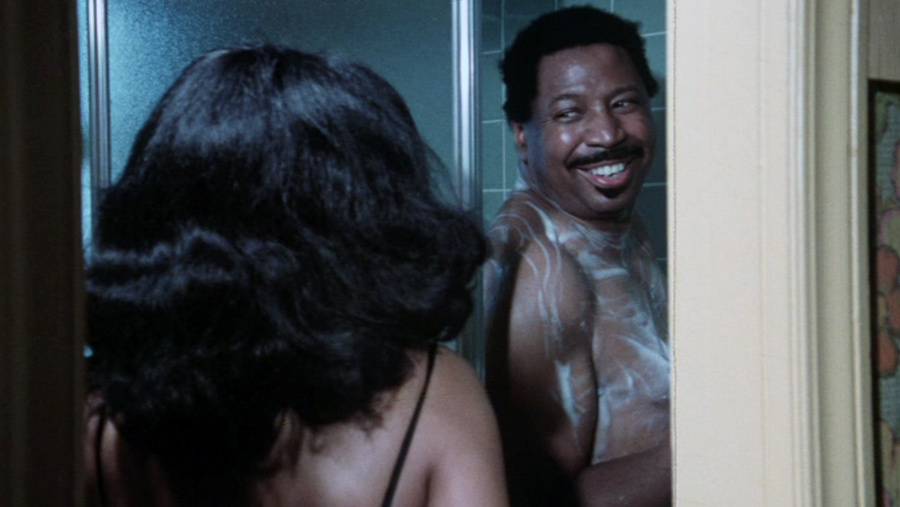 Among this group was Wildman Steve, born Steve Gallon, whose party albums were successful enough to warrant two starring roles in the wake of DOLEMITE’s surprise success.  (Wildman Steve also appeared in Moore’s PETEY WHEATSTRAW, THE DEVIL’S SON-IN-LAW, so one imagines the relationship between them as a friendly rivalry.)  The first, 1976’s AIN’T THAT JUST LIKE A HONKEY!, remains elusive, but his follow-up has recently made its DVD debut thanks to Vinegar Syndrome’s agreement with theAmerican Genre Film Archives (AGFA). 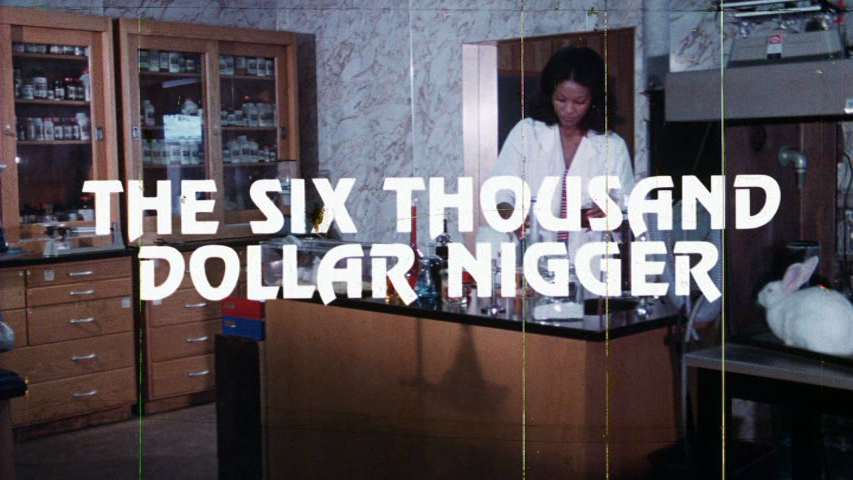 Released under the name SUPERSOUL BROTHER (the same moniker given to its earlier VHS incarnation), the film’s on-screen title is THE SIX THOUSAND DOLLAR NIGGER, with which it was first release and which is, no doubt, a tougher sell today, so I’ll stick with the given name for the rest of the review.  SUPERSOUL BROTHER is a “heist film,” in the sense that there is, in fact, a heist in the film and the plot exists because of it, but any similarities between this and RIFIFI end with the fact that both movies contain scenes in which people open safes. 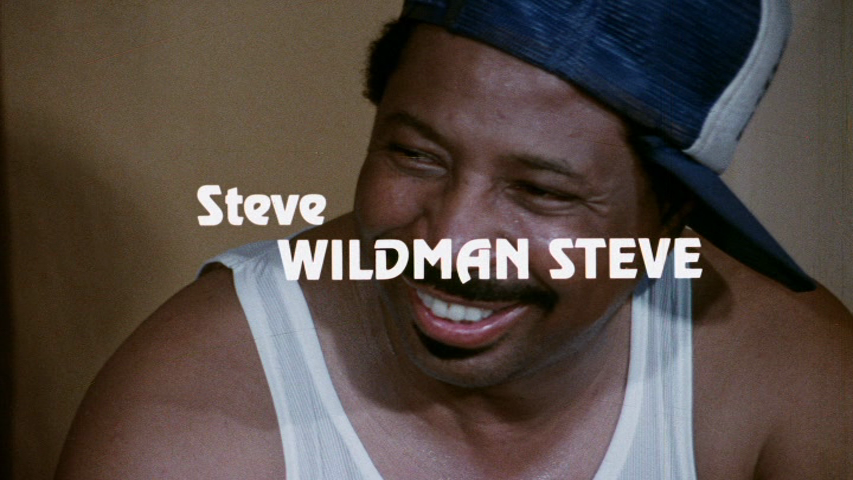 Instead, the film exists primarily as a showcase for Wildman Steve, who plays “Steve,” a “wino from the ghetto” recruited by a pair of criminals, who have enlisted scientist Dr. Dippy (diminutive Peter Conrad, later of THE FUNHOUSE and a pair of PORKY’S flicks) to produce a formula that gives a man superhuman strength.  The $6,000 project (science ain’t cheap!) works, but comes with a tragic side effect – the recipient will die after exactly a week unless the doctor and his assistant Peggy (who seems to do most of the work) can discover a neutralizer for it. 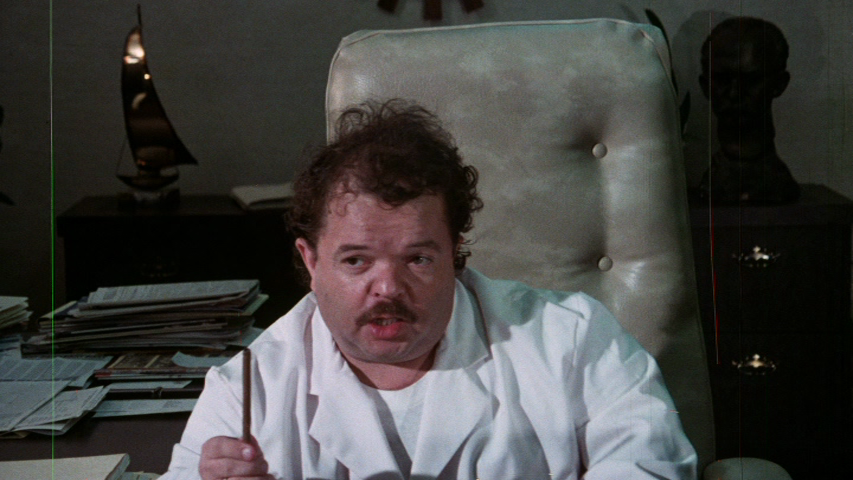 They don’t, of course, tell Steve about this inevitable conclusion.  Instead, they set him up with an apartment and give him a “maid,” whose primary duties seem to include washing our hero’s saggy ass.  Steve lounges around for a couple of days before the treatment, allowing him to romance the virginal Peggy, because hell, why not spend half of the movie with random filler before getting to the actual plot? 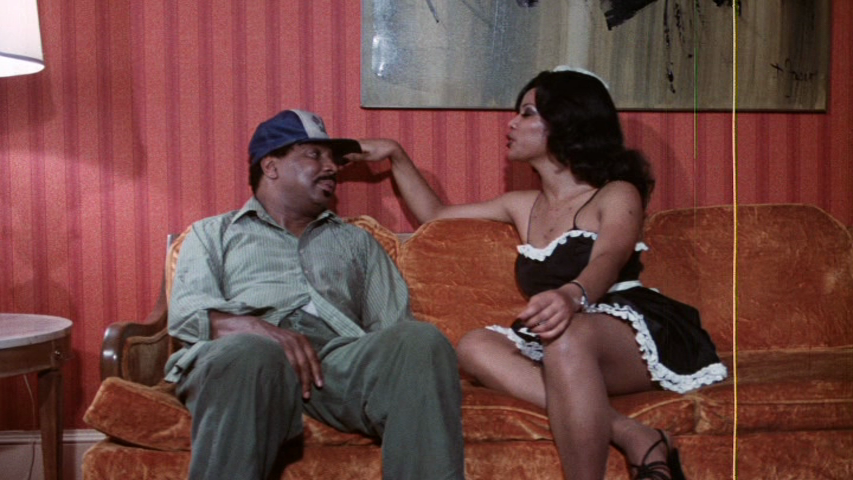 Once Steve does receive the strength-enhancing shot, the difference in his behavior seems to be restricted to the ability to lift heavy objects and the occasional reciting of James Brown song lyrics.  Steve is essentially still Steve, making off-color jokes and lecherous comments with wild(man) abandon.  Granted, with his newfound abilities, he can now take part in one of the most ridiculously-conceived heists in film history and even manage a pair of finale twists that eclipse that moment of absurdity, so it’s certainly a fair exchange. 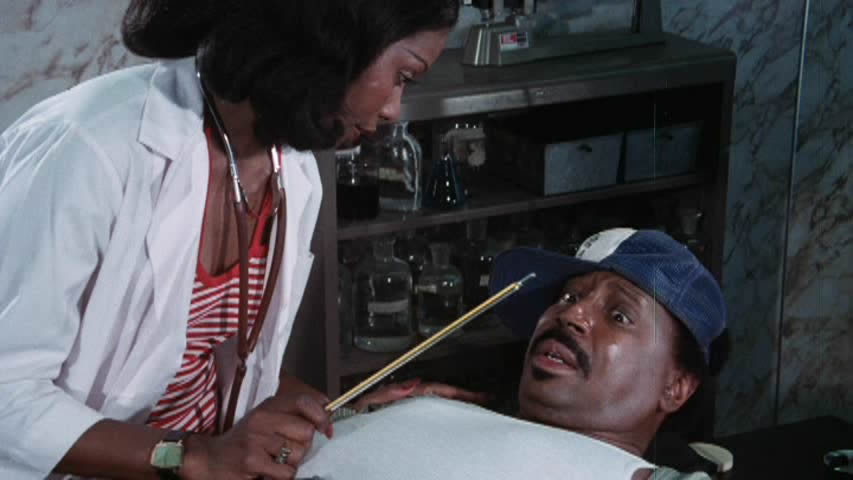 There’s no question that SUPERSOUL BROTHER is an impressively dumb, completely senseless movie.  You could easily write an entire review composed of dozens of questions pointed at the logic of the events on screen.  But SUPERSOUL BROTHER isn’t here to make sense, it exists to warm you to the talents of Wildman Steve and his energetically lowbrow sense of humor, and whether or not you take to BROTHER is dependent on how well you’d take to Rudy Ray Moore’s comedy style without the rhyming couplets. 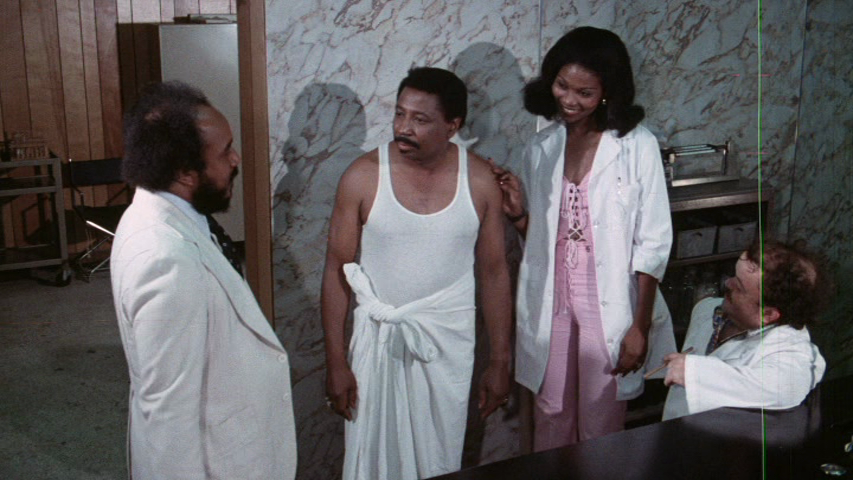 Some of SUPERSOUL BROTHER is genuinely funny, such as Steve’s comparison of a woman’s breasts to windshield wipers.  Some of it starts out as funny, but is then run into the ground by director Rene Martinez Jr., who is going to make damn sure you’re going to get this cunnilingus joke if it has to be explained to you three times.  Much of it is inexplicable, and there’s certainly plenty of stuff to be offended by if you’re inclined to clutch your pearls, but who the heck is going to watch something like this and then act shocked when there’s a gay joke? 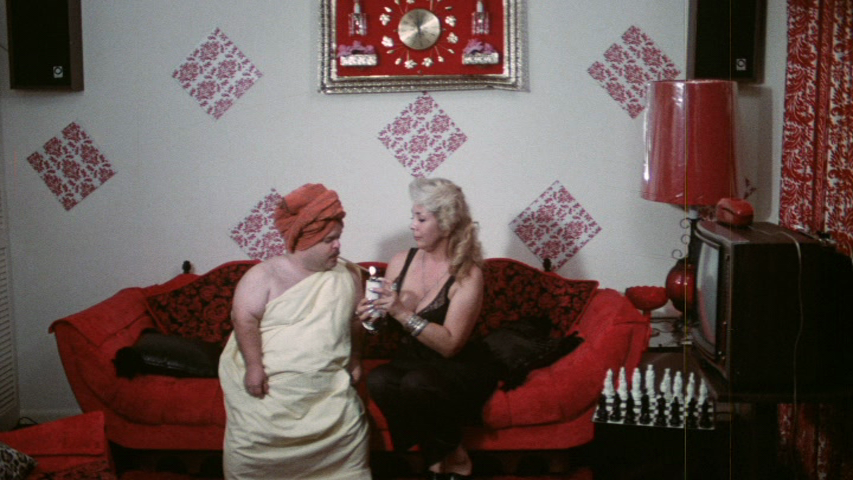 Very cheaply made in what looks like a couple of redecorated hotel rooms, SUPERSOUL BROTHER is low-rent, deliriously entertaining trash that moves along briskly thanks to the efforts of Steve, so much so that you pretty much forget that there’s supposed to be plot going on by the time it kicks in.  And Vinegar Syndrome and AGFA’s transfer is a huge upgrade over the previous VHS release, allowing every dreadful ‘70s color to pop without being washed out.  Sound quality is quite good, and the film features a nifty score – the only issue is that you do miss some dialogue as some frames from the 35mm print seem to have been lost, resulting in occasional blips. 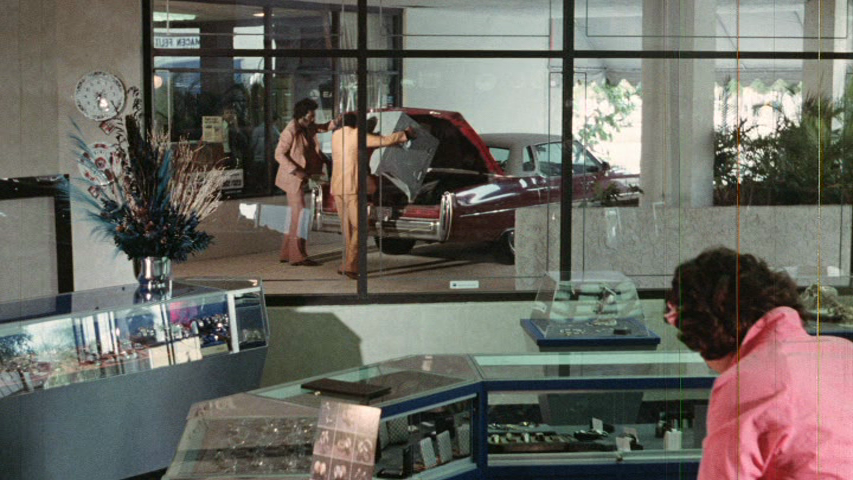 The print used is a bit beat up, so there is occasional scratching, but it’s still an impressive improvement over the VHS transfer, presenting the film in the correct 1.85:1 aspect ratio instead of the overscanned VHS release that included far too much information at the top and bottom of the screen.  Those with the VHS version, however, may wish to hold on to their copies – the DVD clocks in at 74 minutes, five minutes shorter than the VHS incarnation.  Some of this can be attributed to missing frames here and there that don’t have any effect on viewing the film (optimistically, I’d say that they enhance that grindhouse experience), but three scenes from the VHS release seem to be missing, totally a little bit over four minutes of screen time. 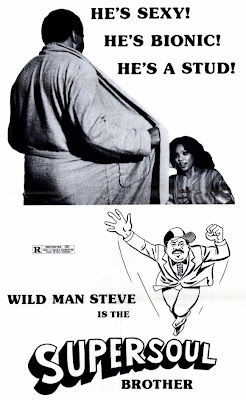 In the first scene, Steve is shown around his new apartment:

In the second, Peggy gives Steve a pill after visiting him:

And in the third, Steve talks about wanting to beat up those that did him wrong:

(Note that these clips come from the VHS release, and do not reflect the DVD transfer.) 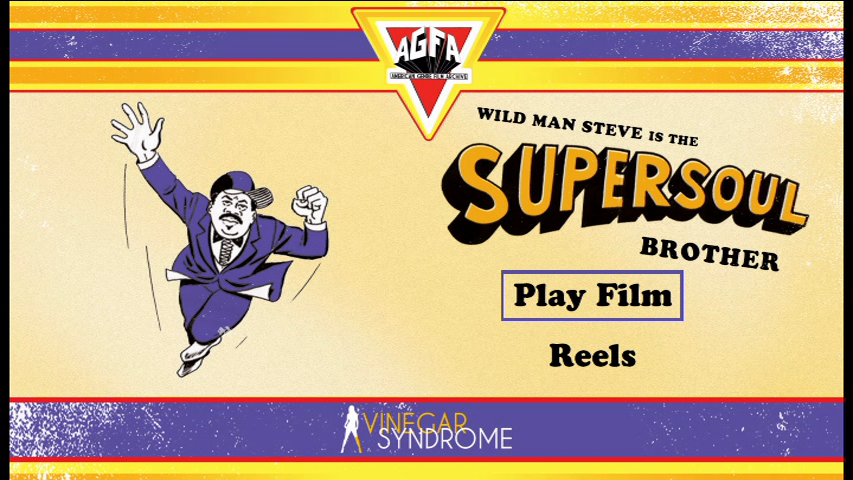 It’s certainly understandable that these scenes were not in the feature – working from a 35mm print that has circulated since the ‘70s often means that it may not be pristine or complete, as the shady distribution practices of the time meant that the same film could be edited and re-edited by multiple parties for whatever reason.  (These three scenes don’t seem to be edited for content, it’s possible that some distributor just wanted to chop off an extra four minutes to fill a time slot.)  While these are hardly scenes essential to the plot (though you could probably chop SUPERSOUL BROTHER to five minutes without chopping anything “essential to the plot), it would have been nice to have included them on the disc in some fashion. This quibble aside, however, SUPERSOUL BROTHER is a welcome release of an entertainingly goofy piece of psychotronic history.  I’m hugely appreciative for the team of Vinegar Syndrome and AGFA to get obscurities like this into a modern format, and I look forward to their efforts in the future.  Any devoted fan of Rudy Ray Moore should not hesitate to give SUPERSOUL BROTHER a chance. 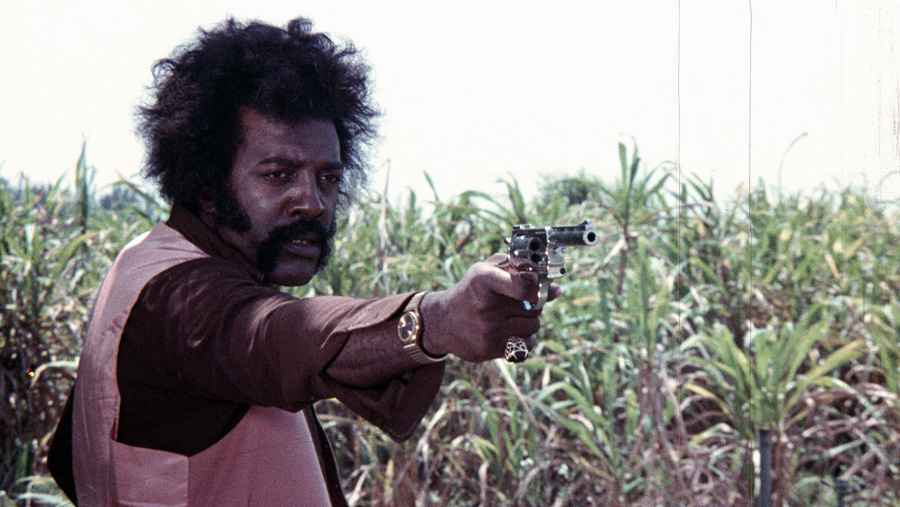