We’re back again! Welcome to Daily Grindhouse’s weekly listing of all that’s new and available to purchase on Blu-Ray and DVD. Everything you see featured here is available in stores or online as of today. And I can’t lie, today is gonna be a weird one. Along with a comprehensive introduction to the genre some call “Bronxploitation,” you will also meet one of the many worst movies I’ve ever seen — a designation not to be taken lightly. 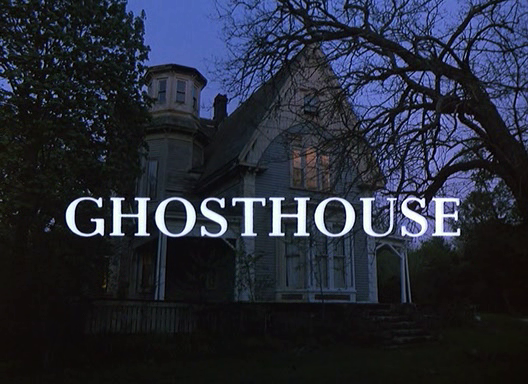 Yes! Kings! Fred Williamson was for many years a favored star player for the great Italian exploitation filmmaker Enzo G. Castellari, who’s kind of a junkyard Howard Hawks. I mean that in the fondest sense. Castellari — who is still at work today — was not as much a genre innovator as a master of the knock-off. Films like HIGH CRIME (made shortly after THE FRENCH CONNECTION), THE LAST SHARK (made several years after JAWS), and THE INGLORIOUS BASTARDS (made quite a long time after THE DIRTY DOZEN) were very far from the first of their kind, but more fun to watch than many of the more highly-regarded films of the same type. In other words, Enzo Castellari is that guy who’s consistently late to the party, but once he shows up, things are gonna get funky.

Maybe nowhere is that clearer than here. 1990: THE BRONX WARRIORS, as you can probably guess from the title, owes everything to two American films, ESCAPE FROM NEW YORK and THE WARRIORS. It’s low-key hilarious to me that while John Carpenter in 1981 foresaw a hellish future for 1997, Enzo Castellari was even less optimistic, and his 1982 post-apocalyptic dystopian New York was set even sooner, in 1990. EIGHT YEARS IN THE FUTURE. In this film, Fred Williamson plays the Isaac Hayes “Duke Of New York” warlord analogue, but he’s named “The Ogre” — another funny thing about the film is that there is a character named “The Hammer” but he’s played by Vic Morrow, not Fred Williamson. Just one of life’s funny little ironies.

The leading man of 1990: THE BRONX WARRIORS is named “Trash” and he is played by a male model named Marco Di Gregorio, or Mark Gregory as he’s billed here. Mark Gregory, to phrase it politically, is not a Kurt Russell type. He’s not even a Michael Beck type. The only quality he has in common with the protagonists of ESCAPE FROM NEW YORK and THE WARRIORS is an affinity for tight clothing. You might not expect Mark Gregory to be the leader of a hero gang to look at him, but here we are.

The Castellari future-pictures — this, THE NEW BARBARIANS, and ESCAPE FROM THE BRONX (this film’s semi-sequel) — have a shameless, hyper-camp Euro-trash aesthetic that is so absurd it’s almost surreal. It’s like Castellari was inspired by only the very kookiest, most instantly-dated aspects of the films that influenced these ones. But for that reason, they’re midnight-movie manna, some of the most fun you can have in the wee hours with your pants buckled.

THE DECLINE OF WESTERN CIVILIZATION: COLLECTION

Sorry to say I’ve not yet experienced these era-defining Penelope Spheeris-directed documentaries, though I’ve seen her WAYNE’S WORLD movie countless times and would welcome seeing anything else she made. I guess the good thing about being behind on something you’ve heard is so great is looking forward to catching up.

Here’s the aforementioned sequel to 1990: THE BRONX WARRIORS, in which Mark Gregory returns as “Trash,” you’ll be happy to know. Fred Williamson sat this one out, for whatever reason, and Vic Morrow did not make a return appearance, for an unfortunately notorious reason, but salvation arrives in the form of Henry Silva, the ne plus ultra of wackadoo character actors, who plays a character named “Floyd Wangler,” which is just a perfectly bizarre name for a Henry Silva character. I look forward to revisiting this film, or even to seeing it for the first time, since it’s easy to confuse THE BRONX WARRIORS,ESCAPE FROM THE BRONX, and THE NEW BARBARIANS with each other. These three films share a director, and various cast members, and an oddball futuristic setting, and all three have been renamed so many times that it’s no wonder they fog over the windshield of the brain. Honestly, they all feel like a really weird dream I once had. Fred Williamson, naked ladies, tigers, skeletons, explosions, the Bronx, this is pretty much the contents of my conscious and unconscious mind anyway. And by the way, having been born in the Bronx, it goes without saying that there’s almost nothing recognizably genuine about the setting of any of these films, which are extremely Italian but not in any way Italian-American. The Jackie Chan film RUMBLE IN THE BRONX feels more authentic, and that one had snowy mountains in it. Classic Jack — one of his many collaborations with Bob Rafelson, with whom Nicholson co-wrote HEAD, the movie starring the Monkees. This film is a lot less psychedelic than that one, but even still, I can’t wait to see the Criterion presentation of it, with that cinematography by László Kovács, who also shotEASY RIDER, THE KING OF MARVIN GARDENS, and GHOSTBUSTERS, awesomely enough.

Can’t speak to WITCHERY, but we covered GHOSTHOUSE last year on the Daily Grindhouse podcast, and while I’d love for you to listen to what we had to say about it, I can’t in good conscience condone watching the film itself. I’d like to think we dove on that bullet for you.

I’d like to hear the conversation happening in the above still frame. I could take or leave all the shooting parts. Just Ray Winstone talking to other celebrities over cigarettes and booze. Need to see it. I’ve heard god things. Not a typo.

Into the subject matter, and it’s always a trip to watch Evel Knievel’s stunts, but be forewarned: Both Kid Rock and Guy Fieri appear in this documentary. As Evel Knievel himself demonstrated time and time again, life is too short.

Rinko Kikuchi (PACIFIC RIM) plays a Japanese woman who heads to the States in search of money she believes exists because she’s watched FARGO over and over on video tape. From that set-up, this sounds so extremely contrary to my tastes, precious and patronizing and cutesy, but from most accounts I’ve come across, this is a terrific film, so I’m hoping to get a look.

The Keanu Reeves film 47 RONIN was based on a legendary Japanese account. This is based on the same account. The director is Japanese, but unless I’m mistaken, Morgan Freeman and Clive Owen are not. Great actors both, not sure they can pull Japanese. So, no idea what is going on here. It’s not like I have a problem skipping Morgan Freeman movies, since Morgan Freeman is in TED 2, but realistically I will probably see LAST KNIGHTS at some point, because as longtime readers know, I’m pretty screwed up.

Also known as WARRIORS OF THE WASTELAND, this movie to me is easily confused with 1990: THE BRONX WARRIORS and ESCAPE FROM THE BRONX, since they all came out within a year or so of each other, along with some of the other reasons I mentioned. Here Fred Williamson is back to being a full-on hero. George Eastman, who was so good in Mario Bava’s RABID DOGS and who also appears in 1990: THE BRONX WARRIORS, plays a villain. That’s unfortunate for him, since the villains wear super-embarrassing armor that makes them look like a cross between the Spaceballs and certain brands of vibrators. And the vehicles they drive are even more embarrassing, if you can believe it. Really, you may need to see this one for yourselves. Then you’ll see how confusing this movie can be. I mean sexually!

Classified as a Czechoslovakian surrealist film, which is not something I can say I see every day, the Google image search on this one alone is chock full of amazing images. Very excited to see it for the first time.

Did you remember Kurt Russell being in this movie?!? I totally didn’t until I checked IMDb just now. Guess a lot has happened since then. All I really do remember is the sequence set in an uncommonly empty Times Square, which appealed to me on a primal I AM LEGEND level, and the part where two people on a date draw each other, which I decided to try on a date once. That’s when I remembered I was a cartoonist and not a portrait artist. Not all women like to be drawn like Looney Tunes. 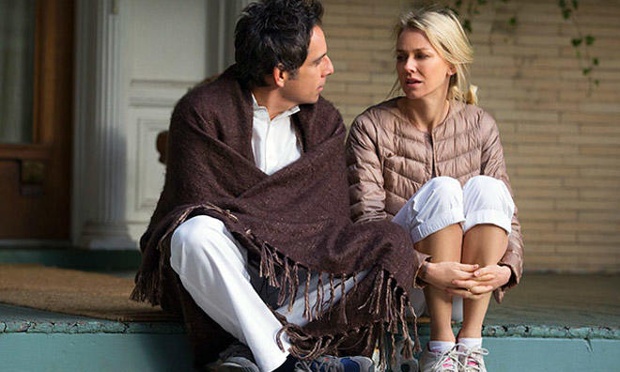 Strictly on the basis of those hats, I want to punch at least one of those guys. Normally I like Ben Stiller so I’ll spare him, but that hipster kid is fucked. Sorry. I’m getting punchy in my thoughts. Must be time to end the column. But please remember… 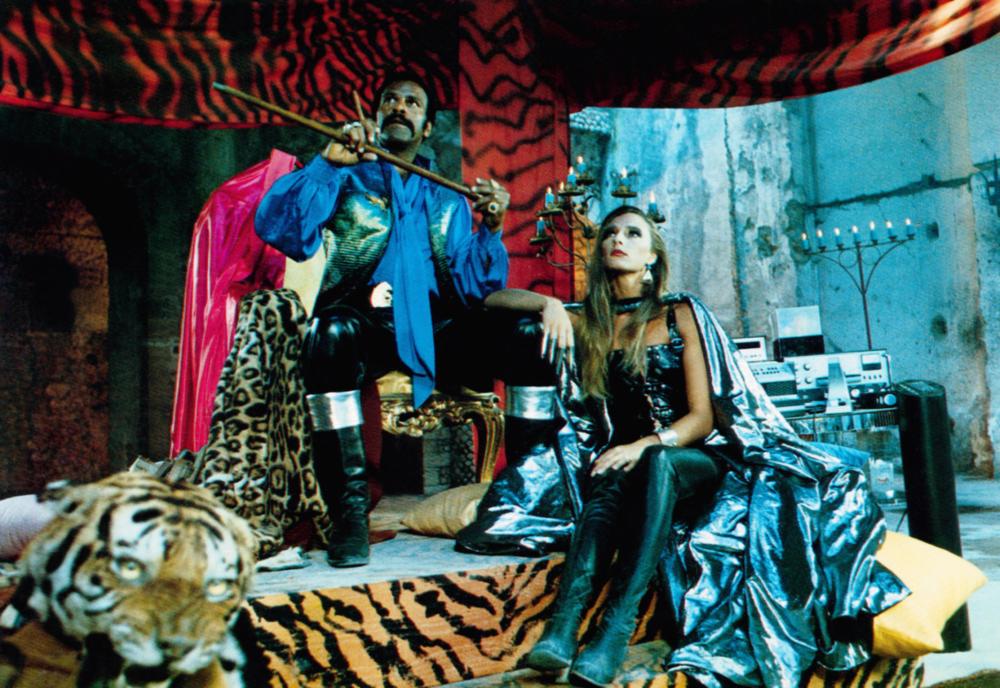