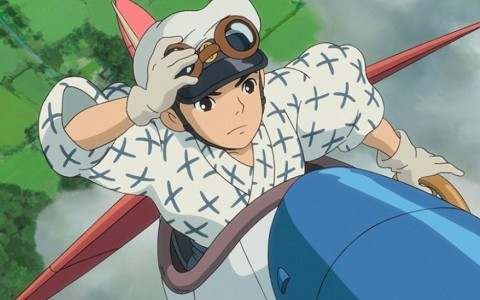 Hayao Miyazaki’s alleged swan song to cinema may be the least fantastic of his films, but it is still chock-full of moving, dreamlike images drawn from a typical combination of imagination and the natural world. As the renowned Studio Ghibli artist animates the story of fictional aeronautical engineer Jiro Hirokoshi, the viewer gets the sense that he is telling the story closest to his own life. Jiro, like Hayao, is a man burdened by the obsessive work of genius and audacious dreams, but still delighting in the smallest wonders of our world, like shooting stars or the delicate construction of mackerel bones.

The mastermind behind such beloved animated films as MY NEIGHBOR TOTORO, HOWL’S MOVING CASTLE and PRINCESS MONONOKE has long paired surreal, manga-inspired animation with stories that seem equally rooted in scientific observation and conservation and mythology-based flights of fancy. His animated creations like Totoro, No-Face, and Ponyo have provided a welcome alternative to Disney heroes with their odd and sometimes frightening appearances and demeanors paired with their commitment to earthly preservation and order, and the guardianship of a higher moral code. THE WIND RISES falls into a natural order in this catalog, although it is certainly the least child-friendly and most practical of his films. In this narrative, the oil-black, looming threats of war are very real and unambiguous, as are the flowing blood of tuberculosis and the burning fires of earthquake damage. As natural threats, they are more realistic and lifelike, though they arise from the same human design flaws that his previous natural creations did. 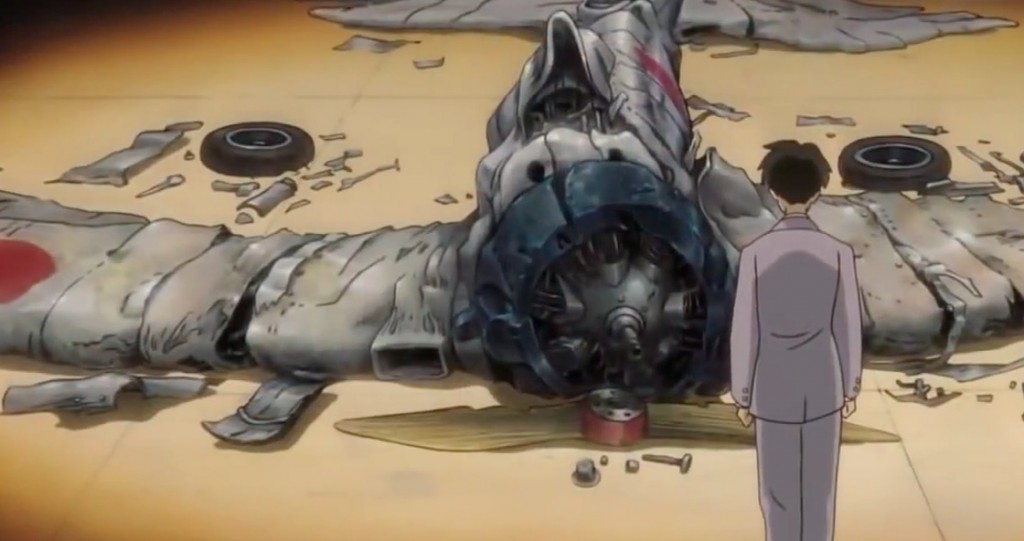 The timeline of the film traces the birth and ascent of Jiro’s engineering dreams. From early childhood, he longs to fly planes, but is plagued by poor eyesight. In a dream, the Italian aeronautical engineer Caproni appears to him and encourages him to design planes even if he cannot fly them. From that moment forward, Jiro is diligent and single-minded in his approach to creating beautiful and efficient aircraft, and is focused on little else. When his pursuit is momentarily derailed by a kind deed that later returns as a love interest, he woos her with paper airplanes and stays the course as she fights against harrowing disease. When Jiro is drawn into creating faster and lighter military aircraft for the war, including borrowing German information, he stays true to his original mission of building the most beautiful designed plane, even if he knows it will be used as a tool of destruction and this is the only way he can achieve his goal.

One can easily see how Jiro parallels the life of Miyazaki. Miyazaki’s mother died of spinal tuberculosis, and his father designed planes for the military in World War II, leading to Hayao’s lifelong preoccupation with flight. However, in even subtler ways, Miyazaki is obviously a workaholic like Jiro, and seems to draw the same amount of inspiration from a scientifically precise mathematical system, like that required for engineering or drawing, and the indescribable wonders of the natural world, which are often rendered in his films as both inexplicable and somewhat magical, and have a large amount of influence over human nature.

Visually, THE WIND RISES contains all the hallmarks of a great Miyazaki film; unique, unforgettable characters drawn in the emotionally expressive style of Japanese anime, beautiful country backgrounds that often appear to be done in watercolors or influenced by the bright natural light and brushstrokes of Impressionism, and audacious dream sequences full of ridiculous flying machines that contain steampunk oddities and bizarre laughing characters that could only be identified as “Miyazaki.” 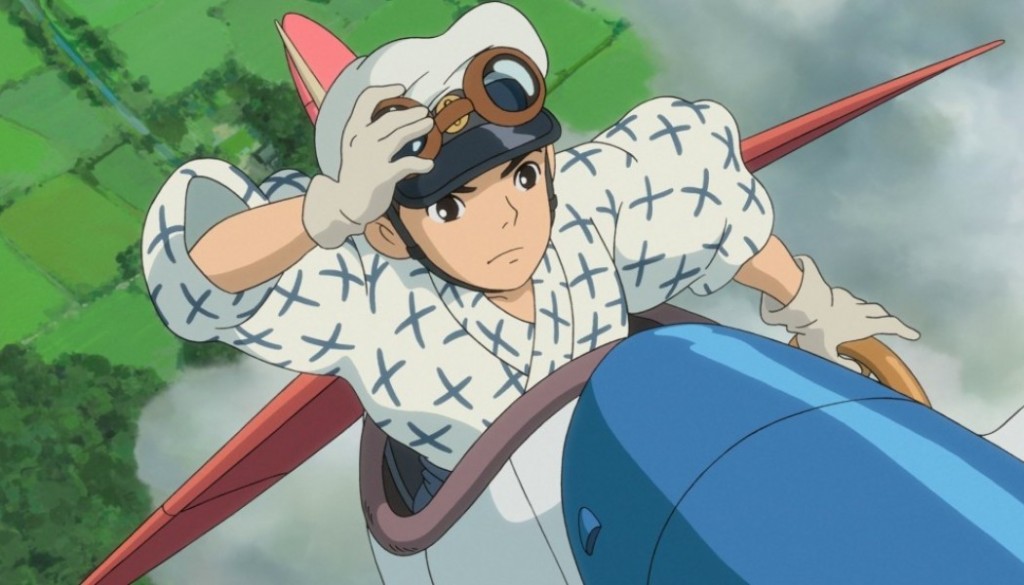 Thematically, the film encapsulates its opening quote by the French poet Paul Valery: “The wind is rising, we must try to live!” All manner of natural forces conspire against Jiro’s achievement of his dreams of flight. It begins with his eyesight; then, he is on a train derailed by an earthquake; then, he ends up designing military aircraft for a cranky, demanding boss and falling in love with a woman, Naoko, whose lifespan is affected by tuberculosis. Not only does Jiro push forward and triumph in the faces of these forces and obstacles, but he often succeeds because of them. As always, Miyazaki shows that living a harmonious life means being in tune to the natural world and working with the gifts it is giving you if you know how to appreciate them. Without the seemingly undesirable force of the earthquake, Jiro would never have met and reconnected with his greatest love; without the war, he may not have achieved his dream of designing the greatest aircraft he could. In Miyazaki’s world, natural forces are not necessarily malevolent or benign, but simply something that must be coped with, adapted to, and most of all, paid attention to.

Note: I unknowingly saw the English dubbed version instead of the Japanese cast with subtitles, so I can comment on that version. The voice acting cast was still strong and included many notable names, perhaps most humorously, Werner Herzog as starry-eyed old German mentor Castorp and Stanley Tucci as an overly enthusiastic Caproni. Joseph Gordon Levitt as Jiro could sound a little monotonous at times, but it’s hard to say whether or not this was inappropriate for a man as obsessed as he was. Overall, in the tradition of Studio Ghibli, it was a strong dub that I didn’t feel distracted from the beauty or the message of the film. I know this is important because it is only available with the English dub in some locations, and I would still encourage you to see it. 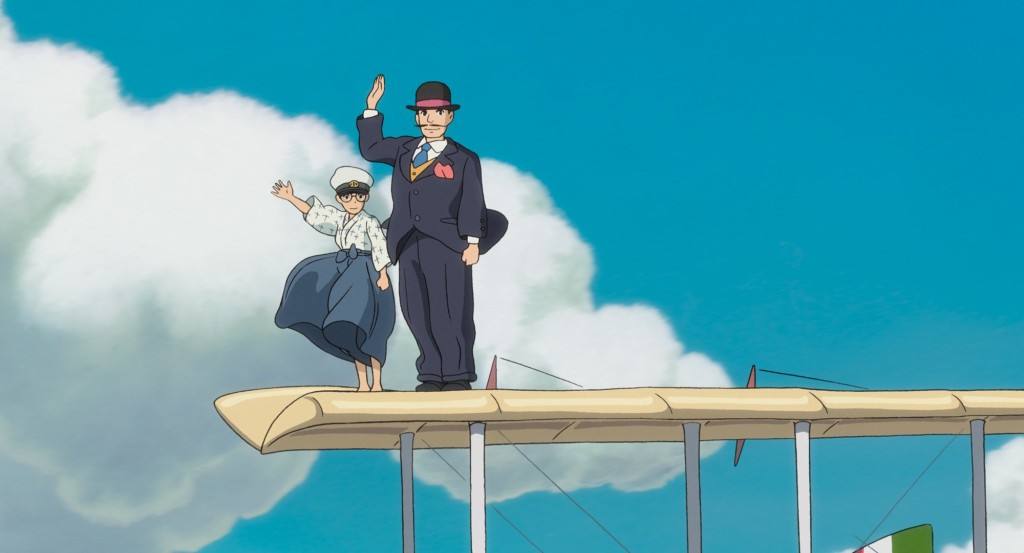