Long-time fans of the Beastie Boys recognize that their sound really didn’t start to formulate until their sophomore effort, Paul’s Boutique. The layered sampling & the lyricism that became the Beasties’ brand were only in their infancy on Licensed to Ill – a record more-than-a-little influenced by producer Rick Rubin.

This metaphor is one I’ve enlisted before when describing how SE7EN falls within David Fincher‘s filmography. In the same way the Beasties were hungrily discovering themselves both as artists and a commodity within a larger industry, Fincher had to course-correct his own career after the dismal experience of his debut feature, ALIEN³. While New York City’s best white-boy rap group had to destroy & reinvent with smaller focus, Fincher had to get back to what made him a master visualist, and, hopefully this time, without the studio interference that plagued his first film. The hunger for change is sometimes more important than the hunger to define oneself or be heard.

What SE7EN depicts is a maturity of over a decade of music video direction for Fincher – a man who absolutely knows what he wants – bolstered by an unmistakable style. The collaborators he teamed with – Pitt and Freeman, writer Andrew Kevin Walker, cinematographer Darius Khondji, production designer Arthur Max, composer Howard Shore, makeup effects maestro Rob Bottin – all contributed to a truly dark and menacing slasher-turned-psycho-noir that captured the decaying heroin den chic of mid-’90s urban life.

Partnered with New Line Cinema, Fincher was finally able to show off; to marry his brand of short-form storytelling with a feature-length narrative, filled with lots of smoke, illuminated by flashlights and focused on the technical precision he continued to refine throughout his career. Sequences – like music videos themselves – comprise the memories of SE7EN. Those Stan Brakhage-esque opening titles, with that Nine Inch Nails remix of “Closer” playing underneath, set the stage for a grimy descent into Hell on Earth. The murder scenes – lovingly detailed and distinctive vignettes – tied to the seven deadly sins. John Doe’s apartment maze, a vacation through Limbo. The chase through the hotel. The incongruous geography of Los Angeles, New York City and the desert. They’re all parts of an unsettling and off-kilter world (one which Freeman’s character urges is “worth fighting for”). And, of course, prompt anyone with the film’s title nowadays and they’ll most likely scream its ubiquitous spoiler – SE7EN is “the head-in-a-box movie” – a reputation that I’m sure still leaves its filmmakers giddy. 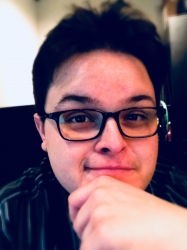 Gregory Sahadachny
Greg Sahadachny is a writer, film critic and film historian. He worked in documentary television for over a decade, honing his skills at shaping narrative. Since 2018, he has been focused on screenwriting. His short screenplay "Scratch" received Semi-Finalist & Honorable Mention placement in Killer Shorts 2021. He lives in Massachusetts with a cool chick and a handsome feline.