Kansas Bowling might very well be a real-life Riff Randell. Barely out of high school, this 17-year-old worships The Ramones and horror films, and is on the verge of making her own bloody mark on cinema with her first feature – the 16mm prehistoric slasher film THE B.C. BUTCHER. But this isn’t some rinky-dink SOV production; this is the real deal, with recognizable talent in front of (Kadeem Hardison!) and behind the camera helping to turn her gore-soaked dreams into reality. But the last piece of the puzzle is held by you. She needs help getting a few thousand dollars together for the project and has an indiegogo campaign – with plenty of perks – to entice you. Kansas was nice enough to do her first ever interview with Daily Grindhouse.

Sweetback (SB): When I was 17, I spent most of my time playing video games and reading comic books. It wouldn’t even have occurred to me that I could mastermind a feature film. Yet here you are looking to helm a ultra-gory horror film before you’re even old enough to vote! Where did the idea for THE B.C. BUTCHER come from, and at what point did you decide that you were going to helm it yourself?

Kansas Bowling (KB): My friend Kenzie and I came up with the idea together about a year ago. We wrote the script together and it was always something we talked about doing, but I don’t think either of us really thought we would at first. But once I graduated high school, I knew that if I wanted to make movies and wanted to skip out on college, I better start making them immediately.

SB: The short opening scene on your IndieGogo page suggests that this is going to be a gleefully violent project. Are people surprised when you describe the sort of bloody content you want to include, or do most accept that violence is a necessary part of making a slasher film?

KB: I don’t think violence in movies surprises anyone anymore. And it’s comical, so there hasn’t been much of a reaction to it. 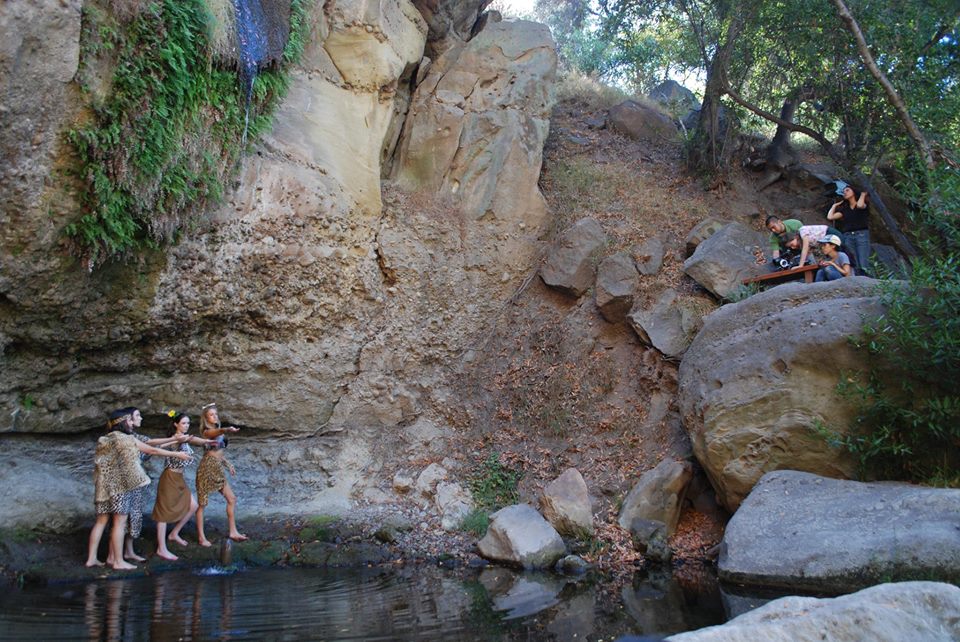 SB: Now here’s a chance to display your Grindhouse cred. What are some of the films that have influenced the tone of THE B.C. BUTCHER? What are some of your personal favorite slasher films?

KB: Well, my favorite movies are MIDNIGHT COWBOY and ROCK N ROLL HIGH SCHOOL, but they haven’t exactly inspired me because I know I can never make movies like that. CAVEMAN was pretty inspiring, for obvious reasons. I’m a huge fan of Barbara Bach. But mainly I’m inspired by films that don’t have much to them besides a mood – very atmospheric films like the ones by Fulci and Argento. After I saw the 1967 film SHE-FREAK which doesn’t have much at all to it besides a look, I thought ‘If I could make a movie like that, I’d be happy.’ I don’t really care for intricate plots or characters with depth or any of that. I just like movies that are pretty to look at and make you feel like you’re having a bad dream. I’m not saying THE B.C. BUTCHER is at all like that, but it’s something for me to work towards. And of course Russ Meyer films as well.

As for slashers, THE TEXAS CHAIN SAW MASSACRE is my favorite. But I love any slasher film. I love how they all follow such a specific formula, just with different themes. They’re kind of like Elvis movies – Elvis as a cowboy; Elvis in Hawaii; Elvis as a carny. They just take the same story and make it Christmas-themed, slumber-party-themed, etc. Or prehistoric!

But what really inspires me more than anything isn’t a movie, but the Ramones (especially Joey)! When everything was becoming so pretentious in music with 20 minute drum solos and all that, they started making two-minute pop songs like rock ‘n’ roll used to be. Nowadays, with horror films, everyone is trying to ‘reinvent’ the slasher or make ‘psychological thrillers’ and I really just wanted to make a basic horror film like they used to be made with nothing spectacular about it – just a slasher formula in a fun setting. And I’m not saying I’m doing anything on-par with what the Ramones have done, because that’d be absurd. I’m just saying that’s what I aspire to be like.

I could go on about this forever so I’ll just stop.

SB: You’ve managed to collect some impressive talent both in front of and behind the camera. Was it difficult getting the cast together, and is there an intimidation factor when trying to direct actors with many years of experience?

KB: It was easier than I thought. I didn’t think anyone would want to be in a movie directed by someone my age, but all of the actors I found were extremely supportive and enthusiastic about the project. The main five girls we auditioned at CAZT casting studios and all five were on board for the project. I was probably just lucky to find such a great cast, so I’m really glad it worked out.

It wasn’t really intimidating directing them, but it’s probably because they were all very kind and respectful. If I had a different cast, it might have been another story, but directing the first scene went very smoothly.

SB: Speaking of acting, how did Kadeem Hardison get onboard with the project?

KB: I went to elementary school with Kadeem’s daughter, Sophia. My dad ran into Kadeem one day and told him I was making a movie and he said he’d love to help out! Kenzie and I quickly added a narrator to the script since their’s only one male role, Rex, who doesn’t come in till later. 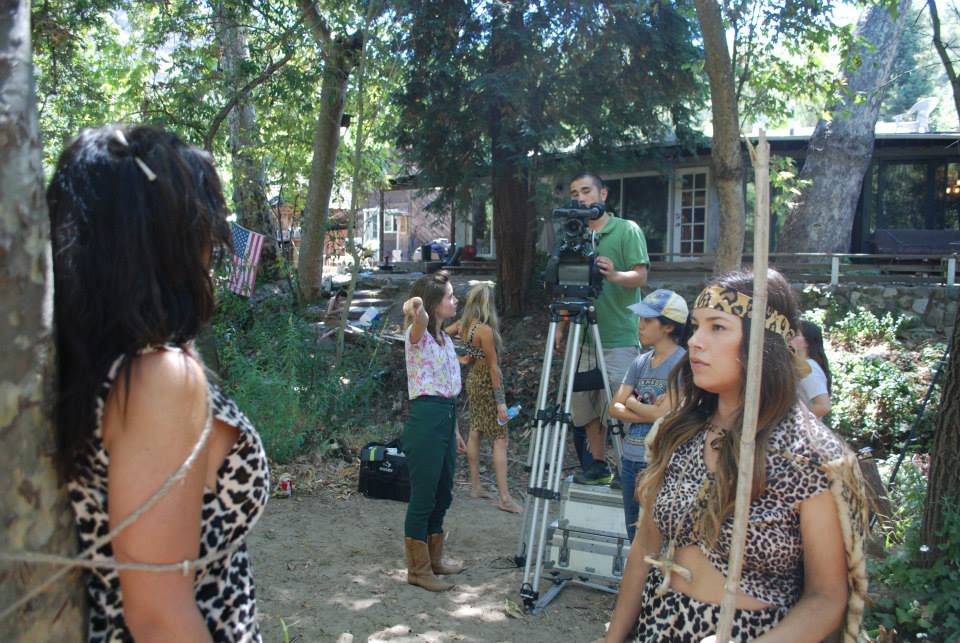 SB: What prompted the decision to shoot on 16mm instead of digital?

KB: Mainly THE TEXAS CHAIN SAW MASSACRE. Those beautiful close-up shots of Marilyn Burns’ eyes… You can’t digitally recreate that look. The colors on 16 are so rich and beautiful and that’s what I wanted THE B.C. BUTCHER to look like. Plus, digital photography doesn’t have much integrity and barely any history. I’m just not at all interested in it.

SB: Events like the VISCERA FILM FESTIVAL have been attempting to break down some of the stigma and stereotypes related to women in horror. Do you still regularly run into people who are confused by your passion for the genre or your interest in making a horror film?

KB: It’s happened once or twice, but it’s not something people bring up to me regularly. I mainly get a lot of crap for not wanting to go to film school. But most people are very supportive of what I’m doing which is good.

SB: Here’s the big question: For those who want to help get this film made.. What’s the best way? What are some of the perks available on the IndieGogo site?

KB: The best way to help get this film made is to DONATE!!! I don’t have a team of people behind this crowd-funding campaign – I’m the sole runner of the project, which can be pretty overwhelming, so I need all the help possible! And if you don’t have any money, please share the project through social media or just telling people you know who might be interested. We have a Facebook, twitter, and a tumblr where you can follow us.

We have some great perks! Some of the most popular ones are these: $25 gets your name in the credits and $40 gets you a digital download of the script and movie once it’s finished.

SB: For those looking to keep up on the progress of the film, or your future work, what’s the best way to do so?

Or donate to the campaign, and you can receive updates sent by email:

SB: And what advice do you have for other young potential directors out there looking to tackle a feature.

KB: I know it’s pretty cliche, but just do it! It might take a while to figure out what type of films you want to make, but in the mean time, write a bunch and film some things and you’ll be on your way!