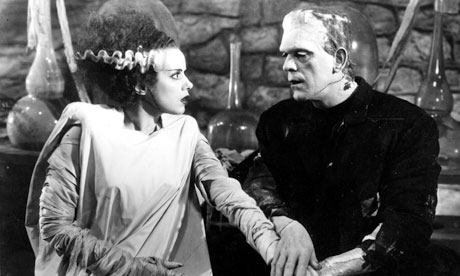 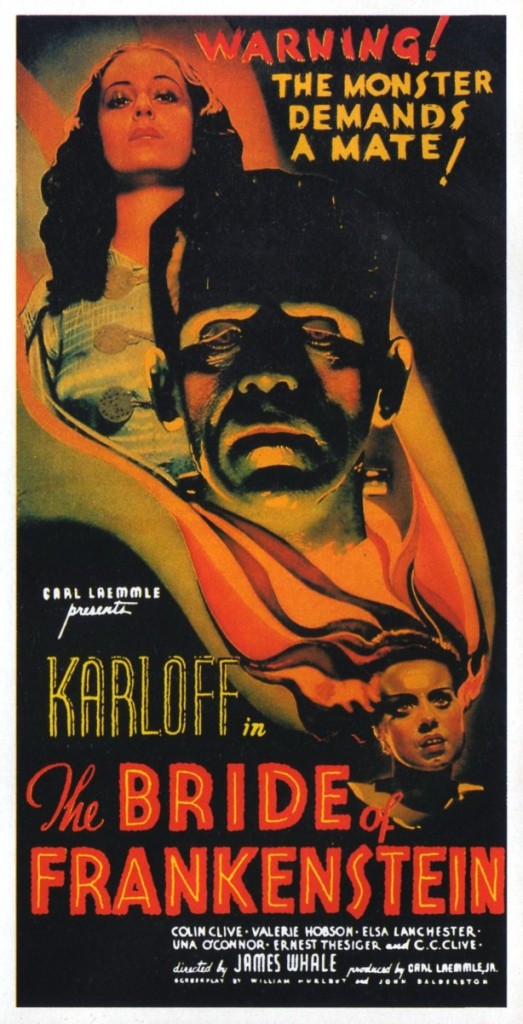 “I hope her bones are firm.” – Dr. Pretorius (Ernest Thesiger). 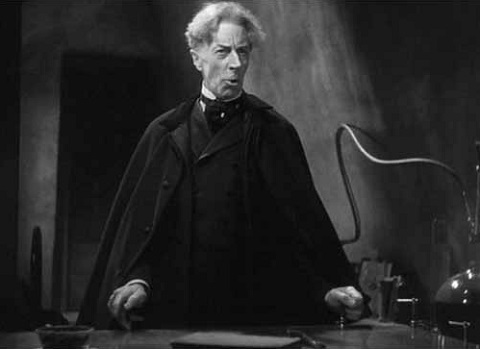 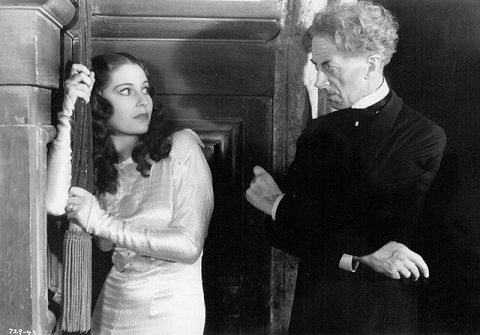 American culture has advanced (somewhat) since the days of “not that there’s anything wrong with that” – I shouldn’t have to qualify how I do not at all make this observation as any kind of a slight; how gay men and women are responsible for just as much wonderful art as their straight counterparts have been; or how I adore the work of James Whale apart from and including any matters of sexual orientation.  But none of that changes the fact that Whale’s 1935 follow-up to FRANKENSTEIN, the equally renowned but tonally opposite BRIDE OF FRANKENSTEIN, is as obviously, screamingly gay as two guys talking showtunes on a Pinkberry date. 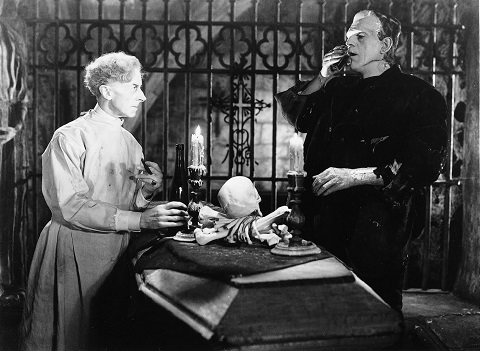 BRIDE OF FRANKENSTEIN is campy, theatrical, broadly comedic, and daringly weird, particularly when viewed next to its darker, far more ominous predecessor.  Whereas 1931’s FRANKENSTEIN had scarily murky compositions, unsettling framing, and a scene of a child getting murdered, BRIDE OF FRANKENSTEIN is weirder, campier, and quite frankly, livelier, which again, is no criticism whatsoever.  I adore it.  As a more recent example, it’s like the difference between EVIL DEAD and EVIL DEAD 2:  Both are terrific horror films, but the ways they play are drastically different. 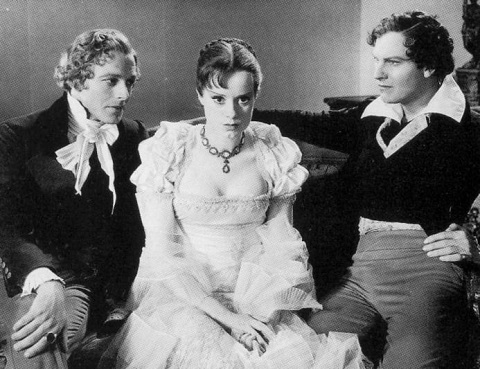 The opening scene of BRIDE OF FRANKENSTEIN is rather strange – again, horror movies hadn’t quite learned to lead off with the scares. With a storm going on outside, the real-life poets Percy Bysshe Shelley and Lord Byron, having just heard the story of Frankenstein’s monster from Shelley’s wife, are told a follow-up tale by Mary Shelley (played by Elsa Lanchester). 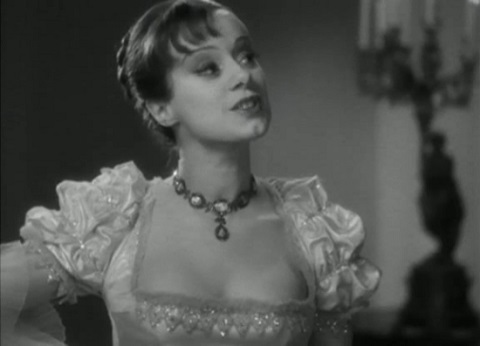 It turns out that Dr. Henry Frankenstein (the brilliantly over-wrought Colin Clive) did not perish alongside his creation in the blazing inferno at the end of the first movie.  In fact, Henry survived, and is tended back to life by his devoted fiancée (Valerie Hobson), who is horrified to learn that Henry hasn’t learned jack-shit from his experience. He hasn’t given up on his deranged experiments; all that’s lacking from a full-blown mad-scientist relapse is just a gentle nudge. 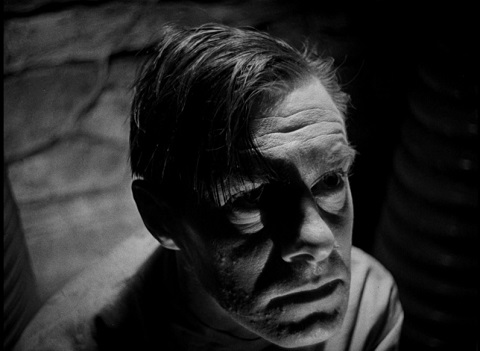 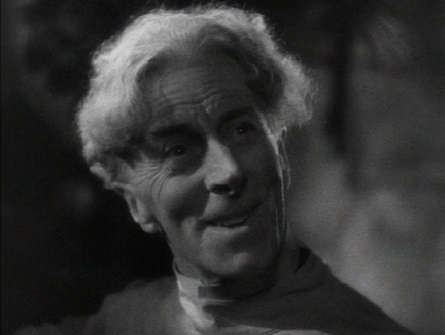 By far the movie’s most memorable character if you’ve seen it (and I say this about a movie that includes two Frankenstein monsters), Doctor Pretorius is twice as insane as Henry Frankenstein, with wilder hair, a nattier wardrobe, and even more nimble diction.  This guy loves to talk. He chews on words like an elderly dachshund masticating on Kibbles ‘N Bits.   He also loves creating unholy monsters.   And he’s good at that too.

In an indelibly eerie scene, jarringly scored to jubilant orchestral music, Pretorius (inexplicably wearing what looks like a yarmulke), show Frankenstein his latest creations: miniature human beings who he keeps in jars.  There’s a king and a queen, a pope, a man Pretorius refers to as “a devil”, a ballerina, and a mermaid who lives in a bottle of water.

Instead of being totally thrown for a loop like any rational human would be, Henry is inspired, and the two decide to collaborate.

Meanwhile, Frankenstein’s Monster, still played by Boris Karloff and still on the run from a world that fears and hates him, has also survived the events of the first movie. 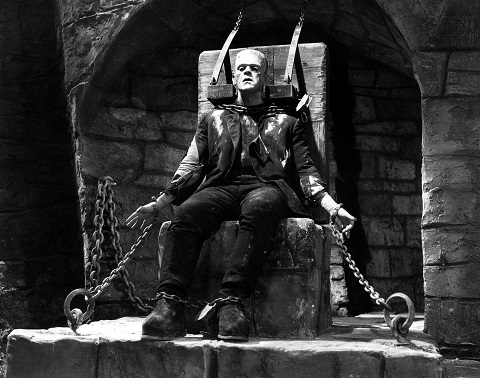 In a very bizarre scene (it’s a trend!), the Monster happens upon Pretorius in his laboratory, sans Henry, and they share a smoke, some booze, and a whole mess of conversation.

The Monster, once a grunting beast, has now become a regular chatterbox.  This is the Phil Hartman “Fire Bad!” Frankenstein Monster we all know and love.  So interestingly enough, BRIDE OF FRANKENSTEIN is more about the business of these three guys (Pretorious, Frankenstein, and the Monster) hanging out and creating the Bride, than it is about the Bride itself.  The Bride doesn’t even show up until the movie’s almost over – not an exaggeration – and when she finally arrives, it doesn’t go well.  It’s kind of a mismatch.  The Bride is played by Elsa Lanchester, in a shocking dual role for those who remember the movie’s opening scene, and she’s terrific (and a total babe, for the record), iconic and striking, but The Bride kind of spends her whole screen time shrieking a bunch, and just generally bumming out the Monster.

Any of you out there been on a blind date that went this bad?  I’ve been on like five this year. 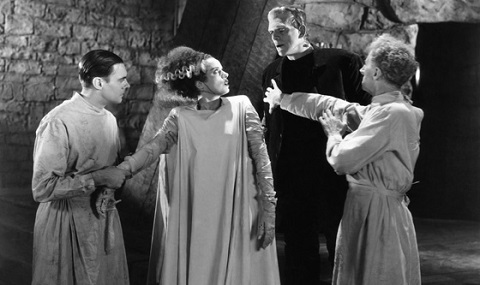 This isn’t exactly a movie that promotes healthy heterosexual relationships.  Between Henry and his constantly beleagured fiancée, and the Monster and his Bride, there ain’t no happy romance to be found — not that this is necessarily the agenda at play.  It’s just something interesting to note in a movie which, once again, seems to be one of the first not-so-subtly gay films of American cinema.  For the presence of Doctor Pretorius alone.  I mean seriously, if Helen Mirren got acting awards for playing a queen, so should Ernest Thesiger have. 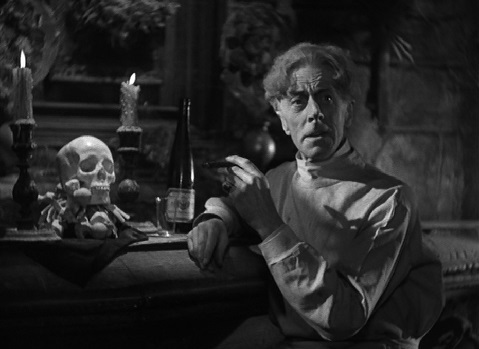 But listen, don’t let any of the subtext make you antsy.  (And if it does, get over it.  Seriously. It’s 2013 now.  Lighten up.)  BRIDE OF FRANKENSTEIN is quite possibly the single most fun of all the Universal monster movies.  James Whale is one of the most accomplished and trailblazing directors of the horror genre, so the movie is creepy where it’s intended, but it’s also a total riot, and not by accident either — it is intentionally funny in all the places where it’s meant to be.  It couldn’t be more different from the monument of classic horror which precedes it, but it’s just as much worth your valuable October viewing time.

BRIDE IN FRANKENSTEIN is playing Tuesday night at the Alamo Drafthouse in Westchester. Glorious!