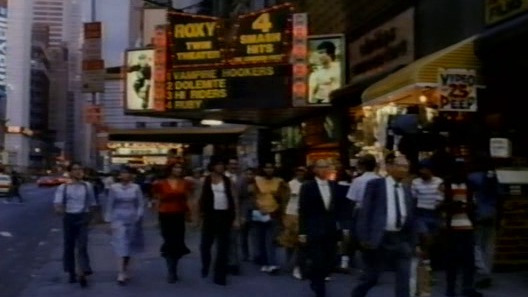 ALIEN SPACE AVENGER sits in a weird cinematic limbo. It seems like it should be a Troma film, with a tone and plot pitched somewhere between NIGHT OF THE CREEPS and STREET TRASH, as an homage to pulp ‘50s sci-fi is mixed with splattery violence. It’s even directed by Richard W. Haines, who helmed Troma’s classic CLASS OF NUKE ‘EM HIGH and features Troma regular Robert Prichard in a major role. Unfortunately, the film has languished in relative obscurity, and you can’t help but think that Lloyd Kaufman’s willingness to promote the hell out of everything he owns on a constant basis would have been beneficial to the film’s reputation.

Instead, ALIEN SPACE AVENGER ended up at David Winters’ Action International Pictures (AIP), the home of countless action flicks who never quite figured out what to do with movies that couldn’t be advertised with a bare-chested roughneck holding a machine gun. It’s not that they didn’t branch out of their best-known genre – AIP’s roster consists of comedies, indie dramas, and even a musical or two – but because of their pedigree, they’re mostly only known by completists, and their lack of current distribution makes them unlikely to be sought out by those who’d actually appreciate their qualities. It’s a shame, as ALIEN SPACE AVENGER in particular is a fun little flick, and while it never reaches the heights of CREEPS, it’s certainly worth looking beyond its awkward title, VHS box and misleading trailer (“In the tradition of THE TERMINATOR and ALIENS“) that sold it as a straightforward horror film upon its release in 1989.

Lensed in New York City in 1987 under the title SPACE AVENGER (the “ALIEN” was added presumably in order to avoid confusion, instead it just creates more, as the avenger referenced in the title seems to be human), the film opens with a STAR WARS-esque scroll explaining that a group of Interstellar Terrorists have escaped from their interstellar jail and are on their way to Earth. Cut to the 1930s, as a group of four rather elderly young people (including Prichard, who’d passed 30 by the time) are on their way to a movie on a double-date.

The group stops to investigate the crash-landing of a UFO, and upon looking too closely, their bodies are quickly taken over by lizard-like little critters bent on the aforementioned Interstellar Terrorism. Getting acquainted with their new-found planet, they stumble into a showing of FLASH GORDON CONQUERS THE UNIVERSE and become convinced that the Earth has amazing technology, and they go off in search of weapons to arm themselves.

Their quest leads them to a meeting of WWI veterans, but the presence of one of the host bodies’ fathers leads to a confrontation resulting in an impressive bloodbath, and it’s soon discovered that the aliens can regenerate parts of their bodies, an effect Haines shoots in gleefully graphic detail. The vets disposed of and shotguns obtained, the group then goes back to their ship in order to wait until Earth technology catches up to them. Or something.

Cut to 50 years later, and their ship is dug up by a construction crew, who are quickly disposed up via shotgun. (Half of this movie’s budget must have been sent on shotgun squibs, as it clearly becomes the alien’s favorite mode of dispatch.) They decided to locate to Greenwich Village, where their surly attitudes and decades-old duds will allow them to easily fit in as a gang of particularly individualist hipsters.

Meanwhile, the “Space Avenger” one of the victims reads in the ‘30s segment (a glance at the Q*Bert ad in the back of the book clues you in that the filmmakers weren’t too big on period detail) is still being published. Its latest writer and artist is Matt, played by future host of Nickelodeon’s “Legends of the Hidden Temple,” Kirk Fogg.

Fogg, who resembles a weird “Full House” love child of Bob Saget and Dave Coulier, is in a bit of a rut with both his girlfriend Ginny (Gina Mastrogiacomo) and the comic. Their opening sex scene is interrupted by Matt’s inspiration for a new scene for the hero, frustrating Ginny, though part of the problem may have been the underwear both are wearing, which disappears and reappears depending on the shot due to some ill-conceived mattework in the VHS transfer. (It’s especially distracting as both have perfectly fine assets.)

The relationship becomes more strained when Matt gets distracted at a club by the alien foursome who’ve come to the place with the promise of a lasers. When they create a scene after discovering the lasers are just part of a light show, Matt invents a whole history for them that, bizarrely, matches their exactly history perfectly and uses it for his comic.

As the comic seems to have an almost instantaneous idea-to-print speed (most of the film seems to take place over about two days, and the aliens never even change outfits) the bloodthirsty gang soon finds out about the comic and declares war on its creator. Meanwhile, Ginny comes back into his life – because her body has been taken over as well, this time as an ass-kicking alien who’s come to Earth to recapture the bad aliens that got away!

Things get fairly goofy from there, as the alien faction starts to splinter. One becomes a drunk and regenerates a hand out of his leg after his foot is blown off. Another becomes a prostitute and picks up businessman Jamie Gillis, only to burn him to death because his “body chemistry doesn’t mix” during sex. Ginny’s role shifts into high gear, as she quickly becomes the focus of the film, buying a wad of weaponry from a pizza parlor and blowing away the aliens at her earliest convenience.

ALIEN SPACE AVENGER doesn’t always work, and the budgetary shortcomings are frequently seen, but it’s still a fairly entertaining exercise in splattery silliness. The four actors playing aliens seem to be having a blast, especially Prichard, who essentially reprises his role as a juiced-up maniac hothead from NUKE ‘EM and THE TOXIC AVENGER. Mastrogiacomo, an actress best known for playing Henry’s mistress in GOODFELLAS who passed away from a heart infection in 2001, is especially fun to watch, even if she doesn’t really get much to do for the first half of the film.

ALIEN SPACE AVENGER never manages the wit of NIGHT OF THE CREEPS nor does it reach the gleefully sordid heights of STREET TRASH, but it’s still an entertaining 80 minutes that deserves better treatment than AIP’s VHS transfer gives it. It’s hard to hate a movie where characters make proclamations like, “There are no weapons here! These creatures are savages!” and prostitutes throw their high heeled shoes at intruders to their territory, and ALIEN SPACE AVENGER can be downright entertaining to an audience with their expectations in check and a case of beer at the ready.