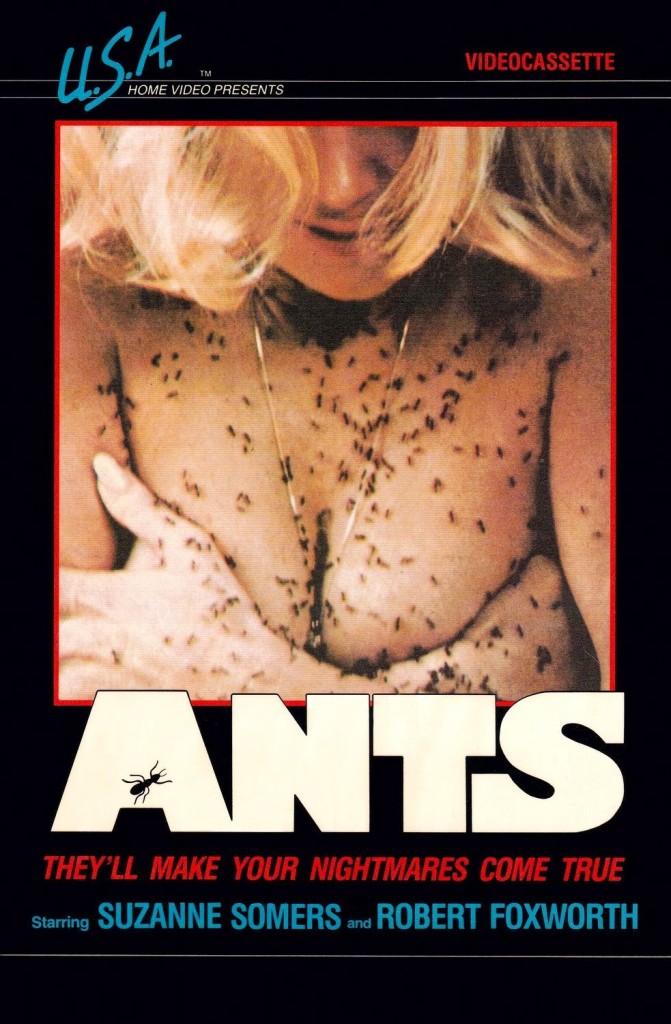 ANTS is a movie from 1977 that is not to be confused with the H.G.-Wells-derived EMPIRE OF THE ANTS from the same year, because that kind of a mistake would be just terrible to make, of course.  It’s hard to believe that one year could see the release of two separate movies about an invasion of killer ants, and it’s not so hard to believe that both movies could be so thoroughly forgotten in the years since.

Ant-attack movies aren’t a particularly popular horror sub-genre. One reason is that ants aren’t particularly scary.  Actually, that’s the only reason you need.  You can make them as comically huge as you want, as in THEM!, or you can tell us that they’re poisonous, as ANTS opts to do, but either way, the sight of a line of ants slowly streaming towards their prey is not likely to strike fear into many human hearts. 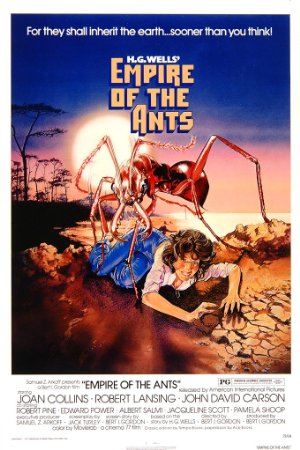 Undeterred by such business, the made-for-TV movie ANTS bounded into the fray.  Again, that’s “made for TV.”  Again, that’s “made-for-TV in the 1970s.”  That means ANTS has charms that have nothing to do with its intentions, which would be to creep out or scare the viewer.  I wasn’t scared, but I laughed frequently, and we’re all going to have to live with that.  It’s the only way I can live with it, myself, since otherwise I’d have to confront the fact that I spent precious moments of my adult life watching this movie.

The credits for ANTS include the following names: Myrna Loy (who was really famous a really long time ago, for you youngsters who are wondering like even long before this movie was made), Bernie Casey (who was in CLEOPATRA JONES, HIT MAN, SPIES LIKE US, I’M GONNA GIT YOU SUCKA!, and SHARKEY’S MACHINE, and who is awesome), “Guest Starring” Brian Dennehy, “and Suzanne Somers as Gloria.”  Brian Dennehy only appears for approximately three minutes, so don’t get too hot under the collar, all you Brian Dennehy completists. He hollers and sweats about as much as you’d want, but it’s a fleeting appearance.

Based on the presence of this cast, I can see how I was initially drawn to watching this movie, like… a line of ants drawn to a dropped popsicle on a summer day?  I’m sorry.  Let’s just leave that line there and see how it sits. The bottom line is that nobody should come to this movie for the cast.  Basically, ANTS deals with a horde of poisonous ants being unleashed by construction work on a country club.  So more than a horror movie, ANTS really belongs to the genre that has come to be ignored by film historians as “country-club disaster movies.”

Disaster movies with all-star ensemble casts were all the rage in the 1970s, so why not set one at a country club?  I’m just spitballing here, but if I were a cigar-chomping 1970s film executive with my mind set on making a movie about an ant invasion, I would at least consider setting it at the Playboy Mansion.  Not that it isn’t a thrill to watch a wheelchair-bound elderly Myrna Loy stare uncomfortably at the ground for half a movie, but somehow I feel like my pitch sounds just a little bit more cinematic, at least. 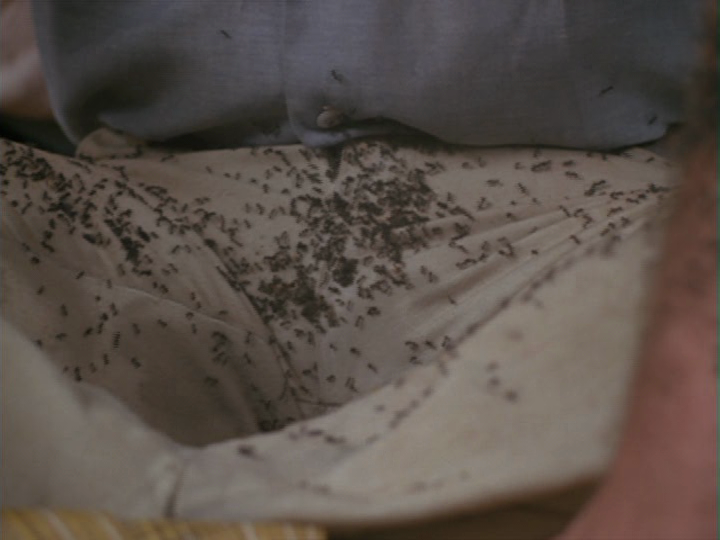 ANTS wears the 1970s on it like a thick, tweedy brown overcoat.  In ANTS, you get to see all the old movie clichés hooking up with each other and giving birth to all-new clichés. A doctor, noting the rash of ant-bite-inflicted collapses, notes: “We’re dealing with something I can’t diagnose or treat.”  The heavily bearded hero played by Robert Foxworth notes, “People don’t die without a reason,” and later, ” Whatever it is, it’s mad because we’ve disturbed it.”  A young boy, covered in ant bites, runs to jump into a swimming pool and his mother screams, “Stop him please — he can’t swim!” 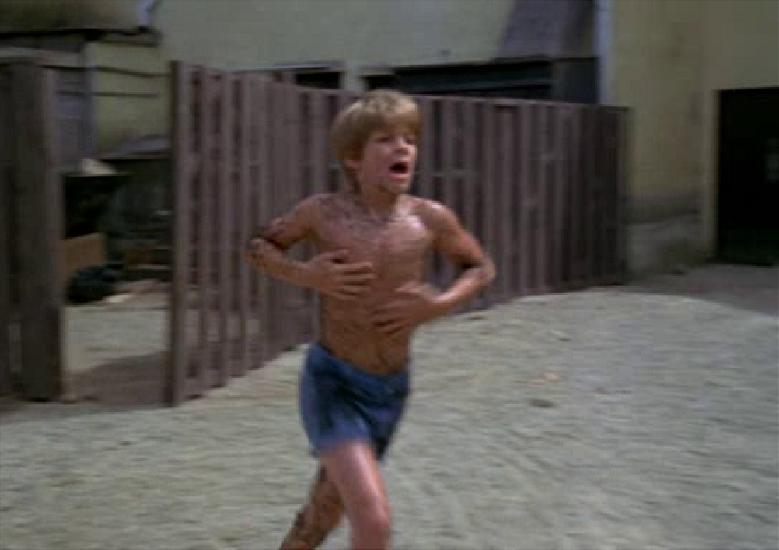 Some other great elements of ANTS: 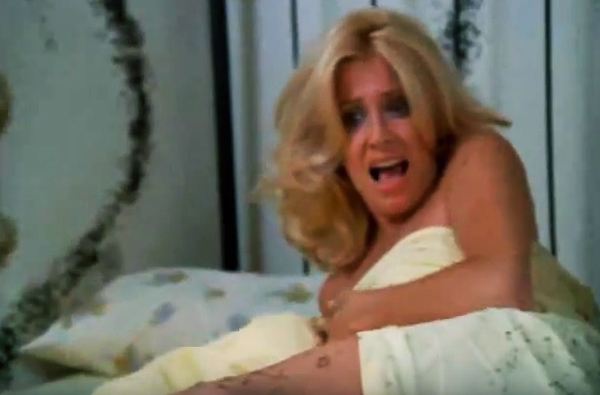 ANTS is also disappointing in the matter of Suzanne Somers, who shows up briefly to utter the line “Look beyond all the bumps and you might see that there’s a head up here!” before proceeding to jiggle said bumps just enough for the straight male critic to notice with dismay that she spends even less time in the movie than Brian Dennehy does.  (Though luckily, she jiggles more than he does.)  Sorry, Ms. Somers, but even if I wanted to, I can’t look beyond your bumps.  Without them, there’s not much of a movie here. 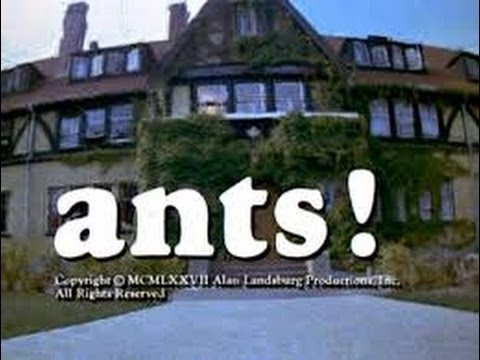