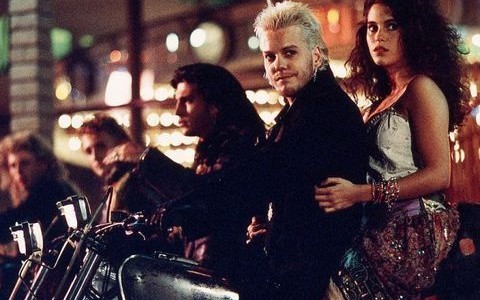 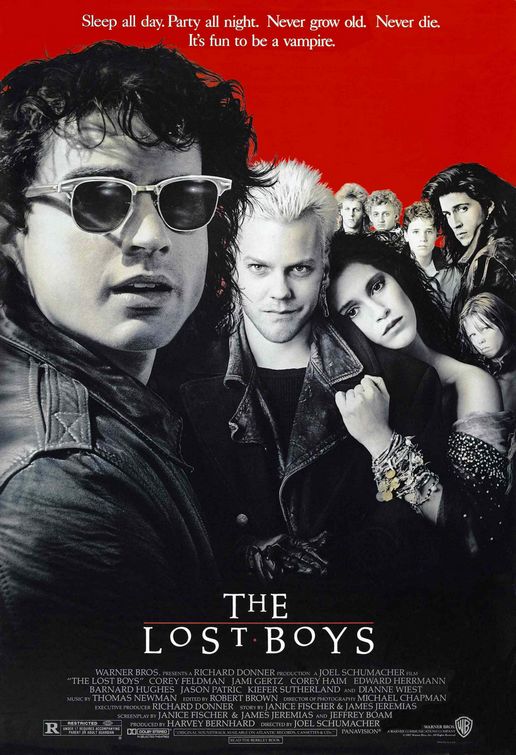 THE LOST BOYS is one finely-aged wedge of 1980s cheese. I don’t know what experience a first-time viewer would have with it, but for those of us of a certain age, there’s a fondness. For those of us who were high school comic book geeks, it was one of the first times we were represented on screen (by  Corey Haim and Corey Feldman), and for everyone else, it’s a camp classic – and not just 1980s camp.  Hall-of-fame camp. There’s no other classification that is able to house a movie with dialogue such as  “How are those maggots, Michael?”, “You killed Marco!”, “Death by stereo!” and of course, “Christ!” (Corey Feldman’s single greatest acting achievement.) 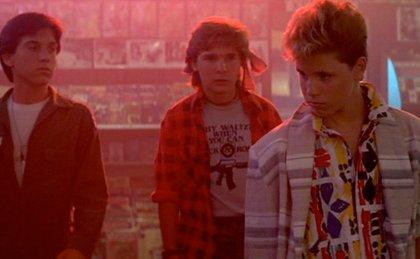 THE LOST BOYS has dual protagonists: young Sam (Corey Haim) and his older brother Michael (Jason Patric, interestingly enough, the son of Exorcist star Jason Miller).  Sam and Michael and their mother (Oscar-winner Dianne Wiest) move in with their eccentric grandfather (Barnard Hughes) in the coastal west-coast town of Santa Clara.  All three newcomers quickly fall in with their own social groups:  Mom meets and starts dating a friendly video store owner (Edward Herrmann).  Michael meets a beautiful, unfortunately-named girl named Star (Jami Gertz), who hangs with a creepy but charismatic dude named David (Kiefer Sutherland), who rolls with a gang of troublemakers.  And Sam meets a pair of comic book store employees named Edgar and Alan Frog (Corey Feldman and Jamison Newlander), who are convinced that both Mom and Michael’s new friends are hideous bloodsucking vampires.  And they happen to be right.

David and his boys are definitely vampires, trying to recruit Michael to their brood.  Can Sam save his brother?  Does Michael want to be saved?  In a three-way collision of tone, the scenes between Michael and Star are eerily romantic, the scenes with David and co. inducting Michael towards the dark side are pure horror movie, and the scenes with Sam and his buddies, as they try desperately to prove the existence of vampires to Sam’s oblivious mom, are goofily comedic.  I have to admit, I still think it all somehow comes together.  It’s a movie so anxious to please, bursting forward with a little something for everyone, that it can’t help but continue to endear.  I’ll still stop to watch this movie if I happen to see it running on TV.

Time Out New York once called THE LOST BOYS “the TWILIGHT of its day” but they’re wrong; Despite the tenous Peter Pan connection and the disturbingly dated fashions (Corey Haim dresses exactly like Kristy Swanson did) and the operatically cheesy soundtrack, THE LOST BOYS at least tries to scare you. This isn’t “vampire romance” — these vampires might have then-stylish mullets and ear jewelry, but they’re nasty S.O.B.’s, and not easily killed.  There are a couple surprisingly lengthy and intense stake-slayings, and the way that the movie withholds the image of the vampires in flight actually kind of succeeds. No doubt it was a practical and budgetary decision, but it helps to force you to imagine a much scarier image. The way-better-than-average cinematography goes a long way in that direction; the film was shot by Michael Chapman, who shot TAXI DRIVER and RAGING BULL. I also think that my man Kiefer is always at his best as a villain, and he certainly goes a long way towards stacking the odds against the heroes in this movie – against an angry fanged Kiefer, what shot can the two Coreys possibly have? 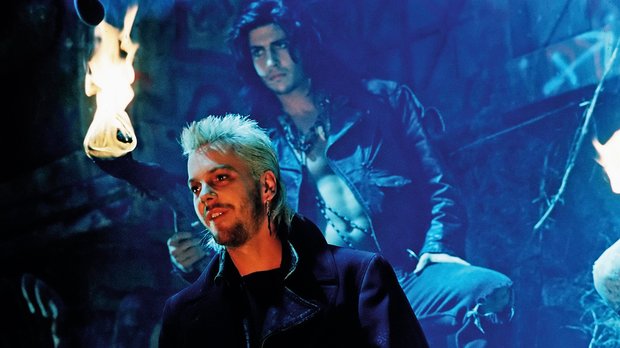 And now here’s some credence towards my argument that you can almost never entirely write off anyone: Joel Schumacher directed this movie. The film-geek community probably doesn’t like much light to be shone upon this fact, and I can’t blame them, after what Schumacher forced us to endure with his 1997 BATMAN & ROBIN.  But he keeps THE LOST BOYS moving at a brisk pace and he keeps the humor in its right places and he stays out of Chapman’s way when a visually atmospheric moment is working.

The only real Schumacher-ism that comes immediately to mind is the greased-up shirtless saxophone player attacking a microphone like it was a bachelorette party. And that’s pretty damn funny, so who can complain? [Also, that guy’s Wikipedia page is a must-read.]

I can’t call it a personal favorite, but I like THE LOST BOYS enough to have eye-tested the first direct-to-DVD sequel, THE LOST BOYS 2: THE TRIBE. Skip that one. It’s not that it’s bad – it’s maybe worse than bad, since it’s not bad, just serviceable. I don’t remember any character except the lead vampire, who was played by Kiefer’s younger half-brother – I thought he was good, understated and charismatic, but the sad fact remains that there’s already an alpha-vampire in the family. Besides, the sad emo cover version of “Cry Little Sister” just pales.  A third sequel came out last year, but I can’t do it. It’s too sad.

Some movies are too much of their era to ever be replicated. THE LOST BOYS is so much a piece of the 1980s that to separate it from its time is to destroy its appeal. If you truly love the vampire, you must leave the vampire to its cave, or else it collapses in a pile of dust.