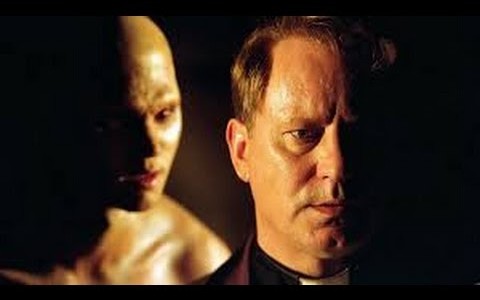 Film studios have a long history of shooting themselves in the foot. In 2004 Morgan Creek Productions did exactly that when they released director Renny Harlin’s EXORCIST: THE BEGINNING to overwhelmingly terrible reviews. This had not been the film the studio heads were originally going to release. Morgan Creek had a nearly finished and almost entirely different Exorcist film, directed by the brilliant Paul Schrader, just sitting on the shelf collecting dust. Schrader had made a psychological study of a now faithless Father Merrin, forced to pick up his broken beliefs and confront a rising evil. Morgan Creek didn’t want a psychological art film. They wanted a horror movie.

After the success of the rerelease of William Friedkin’s original EXORCIST in 2000, t subtitled “The Version You Never Seen”; the studio hired John Frankenheimer to direct a prequel set in Africa. With Liam Neeson signed on to play Father Lankester Merrin, Morgan Creek seemed set to have another great chapter in the series on their hands. Alas, this wasn’t to be. As Frankenheimer’s health deteriorated he was forced to drop out of the project. The film to was delayed and Neeson to drop out due to scheduling conflicts. This was when Paul Schrader had been brought on board to helm the film. Schrader subsequently had the script rewritten and had cast Stellan Skarsgård as the new Father Merrin. Upon seeing a near final edit of the film, the studio did a 360. Schrader was fired and Renny Harlin was given the task of directing a completely different film. Nearly everyone in the film was recast, save for Skarsgård as Father Merrin. A few key scenes from Schrader’s footage were used in Harlin’s version. Almost nothing else in the movie is like Schrader’s film.

Probably the most cloying aspect of the Harlin’s THE BEGINNING is it’s blatant attempt to copy things directly from the original 1973 film, including an entire establishing sequence, “catch-phrases” of dialogue and even the exact same mantra of the original film’s exorcism ritual. Nonsensical scenes seem to play out for the sake of looking cool rather than to advance the plot or, I don’t know, tell a story. Upside down crosses appear for the sake of shock, playing on the audiences mistaken belief that upside down crosses are “satanic”. Since the film involves demonic possession we of course must have a scene where Merrin visits an archaeologist in a mental ward (take a wild guess what happened to him). A boy is ripped apart by hyenas. A tribe leader’s wife has a stillborn baby, maggots and all. A secret passage to a cave is found in a pagan temple found hidden in an ancient church found buried under a pile of dirt in the ground. A war starts between the British Army and the local tribe. A second person gets possessed and everyone dies except Father Merrin and a little boy.

Schrader’s DOMINION, on the other hand, begins in Nazi occupied Holland where Father Merrin is forced by a German officer to choose ten citizens to be executed in retaliation for a dead soldier. In Harlin’s version this same scene is shown as a flashback. Here it is the opening scene, being this is where Father Merrin not only loses his faith, but his belief in the existence of God. Like Harlin’s movie, Merrin is later tasked with the excavation of a buried church. The strange thing is, Christianity hadn’t made it around to that part of Africa during it’s presumed construction. A very naive Father Francis is appointed to assist and represent the church to a much older and now atheist Father Merrin during the extent of the dig. Along the way, Merrin befriends an outcast called Cheche; a mentally disabled and disfigured wild boy shunned both by the local tribe and the British colonists. He later finds the boy beaten, presumably by a tribe member under the belief that Cheche is cursed. After the church doors are finally opened, strange things begin to happen to the more weak-minded characters. Two British soldiers decide to loot the house of worship of precious gems but are later found murdered by one another. The British Major blames the local tribe. Tensions grow at rapid between the tribe and the British army and a shooting occurs. Later, a local tribesman murders students to stop the spread of Christianity. An angry and now grieving parent asks Merrin a very important question: “Is this how the almighty treats those who have kept faith with him!?” Merrin’s response is a very simple, “Yes!” 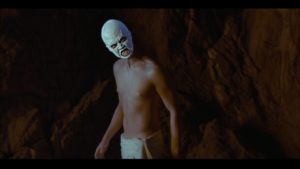 During everything, Cheche sits in the makeshift infirmary recovering from his wounds. As the chaos around him escalates, his condition only seems to improve, physically and mentally. Like the other film, the church had been constructed to hide a temple built to honor a “pagan god” from local history. And you guessed it, the church was built and buried to hold back Pazuzu, the demon from the original film. As Pazuzu slowly takes hold of Cheche, his health grows as his wounds heal much faster than they should. Father Francis takes Cheche’s quick recovery as a miracle from God and against Merrin’s warnings brings him to the ancient church to be baptized. The Holy Spirit does not prevail as Pazuzu assumes possession over the boy and takes control of the pagan temple. This is his domain now. Anyone who enters is now subject to Pazuzu’s delusions. A trail of skeletons litter the wall. The demon had been luring people into the temple, giving them the illusion of their deepest fantasies until they eventually die huddled in the darkness. If Pazuzu is real, than Lucifer is real and in turn if Lucifer is real than God must be real. Father Merrin is therefore forced back into belief. He has to pick up his broken faith and face an evil whose existence he once doubted. At the same time, the British army and the tribe prepare for war as the townspeople’s lives are thrown into psychological turmoil. 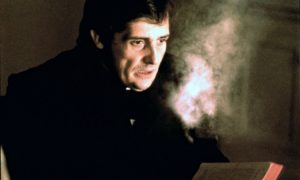 I can almost understand the studio’s concern being that Schrader’s DOMINION isn’t really a horror movie. But then again the original EXORCIST, for all intents and purposes isn’t really a horror movie in its purest sense either. DOMINION is a movie about faith much like the original film deals with Karras’ loss of faith. Merrin losing his faith years earlier may have been part of God’s plan (as the film seems to imply) yet this faith is the only weapon that works against the demon. What good is a faithless preacher? Faith and mere belief are not really the same thing. If you regain your belief in God how do you regain your faith in him? This is a pretty important question, even for practitioners of other religions. Schrader’s movie asks this and a few other questions. Harlin’s movie asks no such questions except maybe, “How can I scare you?”

Much like David Lynch’s DUNE, aspects of the film had to be left unfinished. The hyenas that appear during key moments seem to be early CGI renderings. Oddly instead of hampering the film, the “valley effect” of poor CGI actually adds to the unsettling atmosphere. Had the studio heads accepted the movie and properly finished this may not have been. Angelo Badalamenti and Trevor Rabin composed most of the score, and there was still a gap of unwritten score that neither composer was available to finish. With Schrader running out of options he reached out to avant-garde metal band, Dog Fashion Disco. It was his son’s favorite band. The band’s “Satan’s March” is showcased in the film.

Paul Schrader’s DOMINION is a film that deserves a second chance. It’s message of faith rivals that of even “faith-based” movies made by religious filmmakers. While not really being a horror movie per se, its moments of horror profoundly rival many actual horror movies. I’m not sure if the power of Christ compels you to watch it but I certainly hope I did as well.