We’re activating the 31 Flavors Of Horror! column early this year, because A) it’s fun to do and because B) our pals at Nitehawk Cinema are showing PET SEMATARY at midnight as part of their “SHE MADE IT” film series!

Some movies just can’t budge you too far if you get to them too late. If I’d seen PET SEMATARY when I was much younger, it would’ve ruined my sleep for days. But it somehow eluded me until adulthood, at which point horror is a different experience. A lot of horror-watching in adulthood is fruitlessly searching for frights that’ll shake you up anywhere near as much as the horror films of your youth did. You grow up, and you see first-hand how brutal the real world can be, and it becomes that much harder for something made-up to scare you. Personally, I can absolutely still be thrilled by the deranged excess and outsized imagination found in horror films, but to really mess with my head? That’s a mission almost entirely doomed to fail. 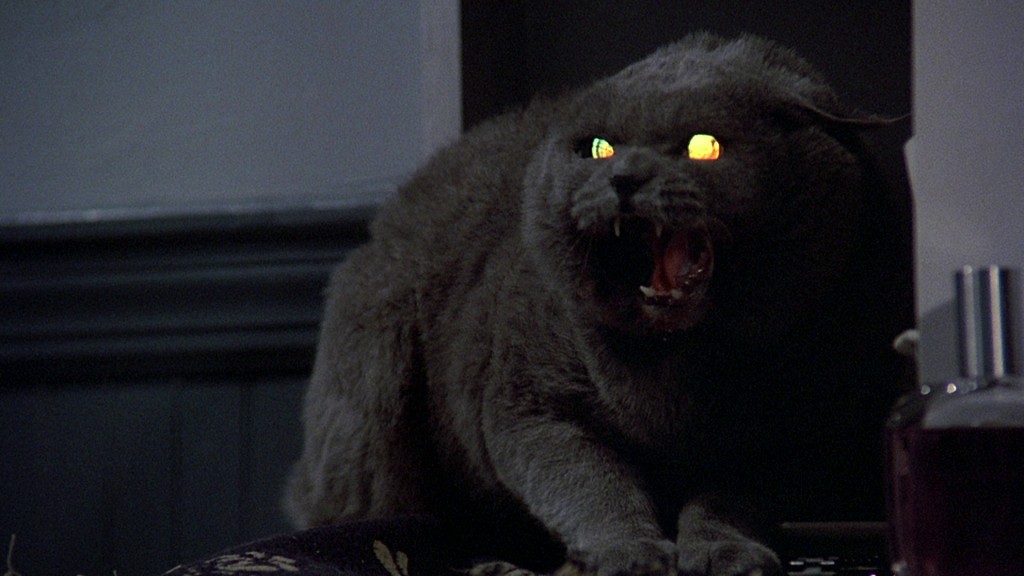 Credit then to PET SEMATARY, for still clinging to its genuinely eerie moments, twenty years later, and occasionally making them work spooky magic. Director Mary Lambert made some of the most memorable music videos of the 1980s, and she gives this film a poppy energy that keeps it moving over some of the dodgier aspects. PET SEMATARY, is, of course, a Stephen King adaptation, written for screen from his original novel by King himself, with all the excellence and potential dodginess that implies. 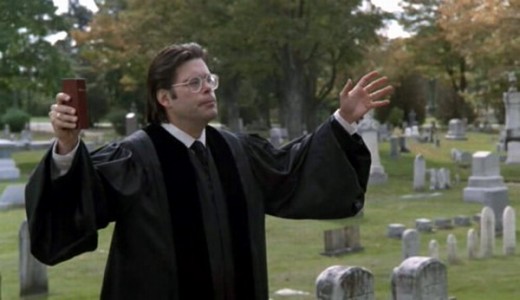 I love Stephen King and I grew up on his books, but whether or not it’s true that every great writer is just rewriting the same story over and over, it’s certainly true that Stephen King has certain elements he returns to with bizarre frequency, and some of those elements don’t always translate to movies: Sometimes a problem when you’re one of the most-adapted writers in modern literature. 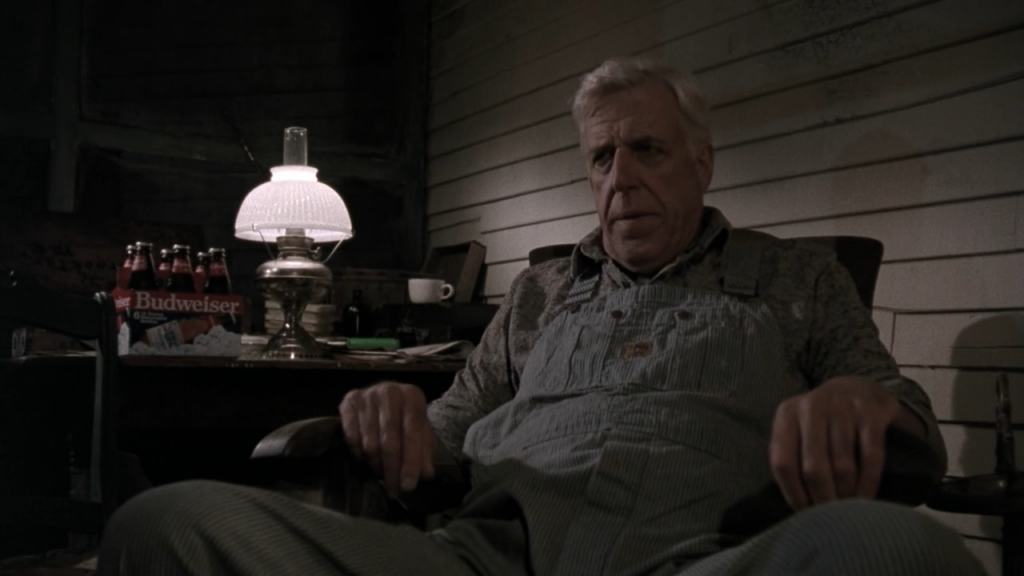 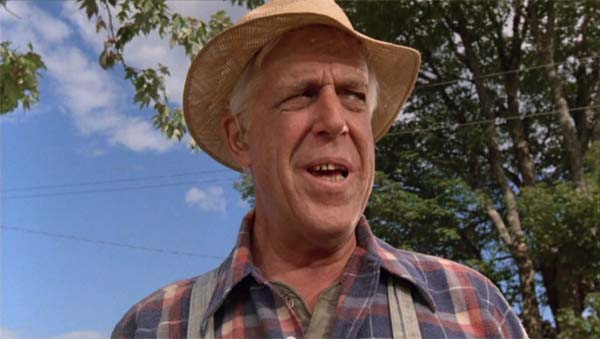 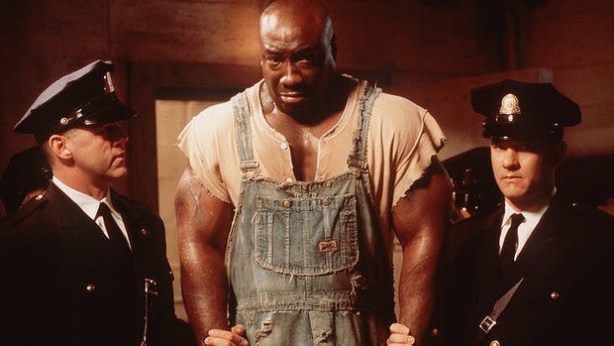 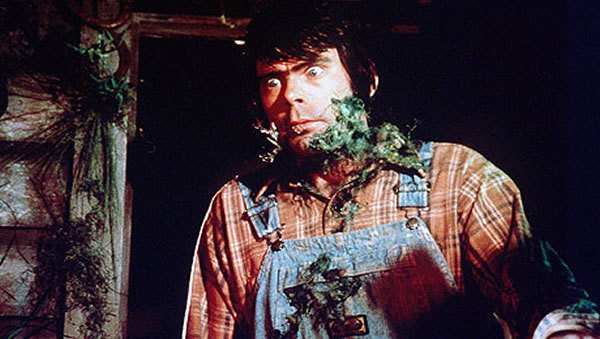 Hell, we all have our leitmotifs and odd peccadilloes. These are Steve’s. Anyhow, the overalls-wearing fella in PET SEMATARY is Jud Crandall (Fred Gwynne), neighbor to the Creed family, who just moved into the country house across the street. Jud doesn’t have supernatural powers but he knows about a plot of land that does: Out in the woods, there is a stretch of makeshift funeral plot where people bury their dead pets, but the area is said to be haunted, and things buried there have a way of coming back. (Canny mythmaker that he is, King both invokes the “Indian burial ground” trope while giving it a down-home spin — “Pet Sematary” is the colloquial way the sign is scrawled, and I think King knows that a portion of his broad audience may not even realize that the word “cemetery” is misspelled.) 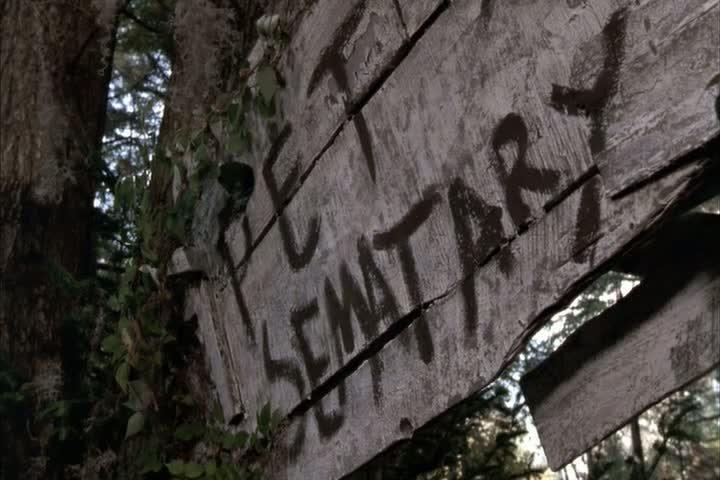 Louis Creed, the young father, is played by an actor named Dale Midkiff who resembles a less-doughy, less-charismatic Nathan Fillion. Louis is a doctor at the local hospital, and while he takes a liking to Jud and his amiable presence, he doesn’t buy the “Lazarus pit” ability of that place in the woods. Louis lives with his wife Rachel and their two young children, Ellie and Gage. Trucks are a major problem in this area, speeding through the farmland and causing a suspiciously high number of accidents in a short amount of time. One accident victim, a jogger named Victor, dies on Louis’s emergency room table, and soon begins appearing to Louis in ominous visions. This is probably my favorite character in the movie, if only because it’s not every day you see a zombie ghost in 1980s short-shorts.

These early sections of the movie may well owe a debt to John Landis’s 1981 werewolf classic AN AMERICAN WEREWOLF IN LONDON, which also used a decomposing spectral figure as the bearer of approaching bad tidings. Honestly, I’m not sure it takes a zombie-ghost to predict where this is all headed. In 2012, we’ve seen so many horror movies that we can surely guess. The next to die is the Creed family’s cat, named Church. (The naming is a touch unsubtle.) Jud warns Louis against it, but after being plagued by the ghost of Victor, Louis is bound to experiment with the funeral plot. He buries Church there, and sure enough, Church comes back to the house, but he comes back changed, complete with an eerie-slash-comical visual effect around the eyes. 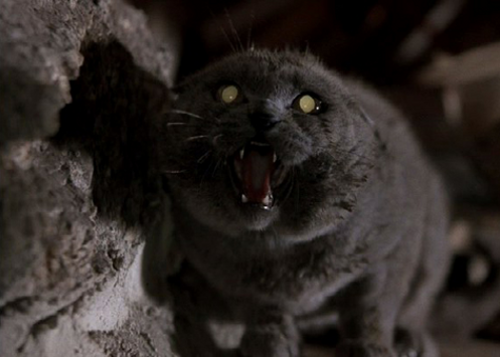 But even those who could predict where the movie is headed may still be shocked to see that it actually goes there. Little Gage wanders into the road and is run down by an inattentive trucker. The movie is pitched somewhere between pathos and camp at this point, complete with an empty child’s sneaker bouncing down the asphalt and Louis’s dramatic scream of “NOOOOOOOO!” — it’s certainly overwrought and kind of funny, but at the same time, this is a little kid, and I’m not made of stone here. 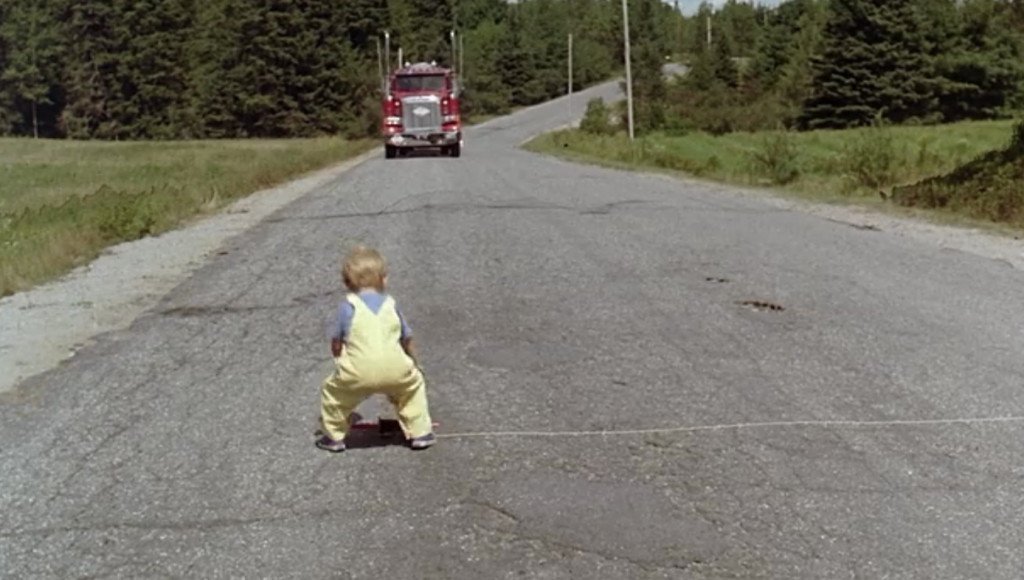 Dad is so shattered by the loss that soon enough he’s contemplating the unthinkable. And once again, the movie goes there. I’m not a big fan of evil-kid horror movies, because I don’t generally find children to be at all scary, but again, damned if the over-the-top nature of the entire proceedings does manage to make little Gage a disturbing enough villain for just as long as he needs to be. (Although his scalpel-wielding style does put me in mind of Inga from PHENOMENA.) 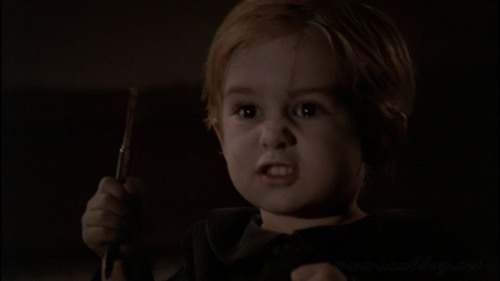 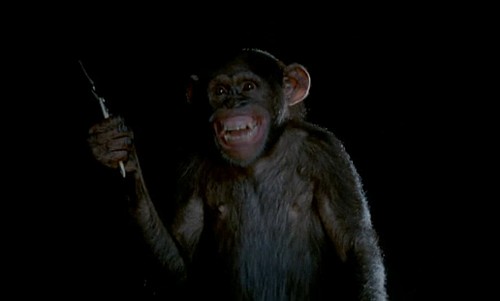 “Over-the-top” really is the description for PET SEMATARY. Part of it is because what works (terrifically) on the page sometimes seems a little much when it arrives on screen. Part of it is casting. Dale Midkiff and Denise Crosby, as the Creed parents, come off as rather stiff, except in the moments they explode with grief and hysteria. She, in particular, has a running subplot about her troubled sister Zelda, who was bedridden with spinal meningitis and apparently deranged — this might otherwise be an affecting tale, but only for the fact that Zelda is played by a man, and not one with a subtle acting style either. And then you have Fred Gwynne walking around. 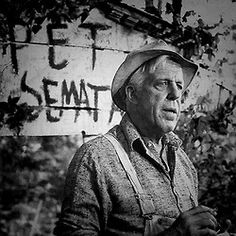 If you know who Fred Gwynne is, it’s most likely because you saw him as Herman Munster, high-spirited patriarch of The Munsters. Basically, Jud Crandall is a role Boris Karloff might have played, but since he wasn’t around, they got the next most recognizable Frankenstein’s Monster. The campiest possible version. This casting is key to the entire enterprise, I think. PET SEMATARY is meant to be taken at face value, surely, since so many people still count it among their favorite scary movies. But my guess is that you’re allowed to laugh and have fun as much as you’re supposed to be scared. It’s a “spook-a-blast,” the kind I can still happily enjoy even coming to it as an adult. If I’m wrong, and I’m not supposed to be laughing, then how do you explain the following picture…? 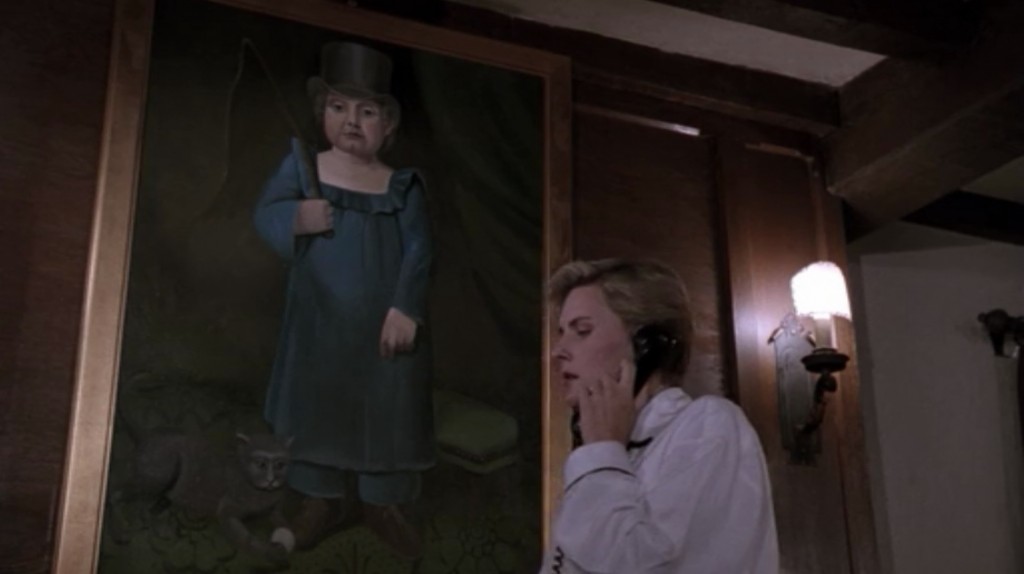 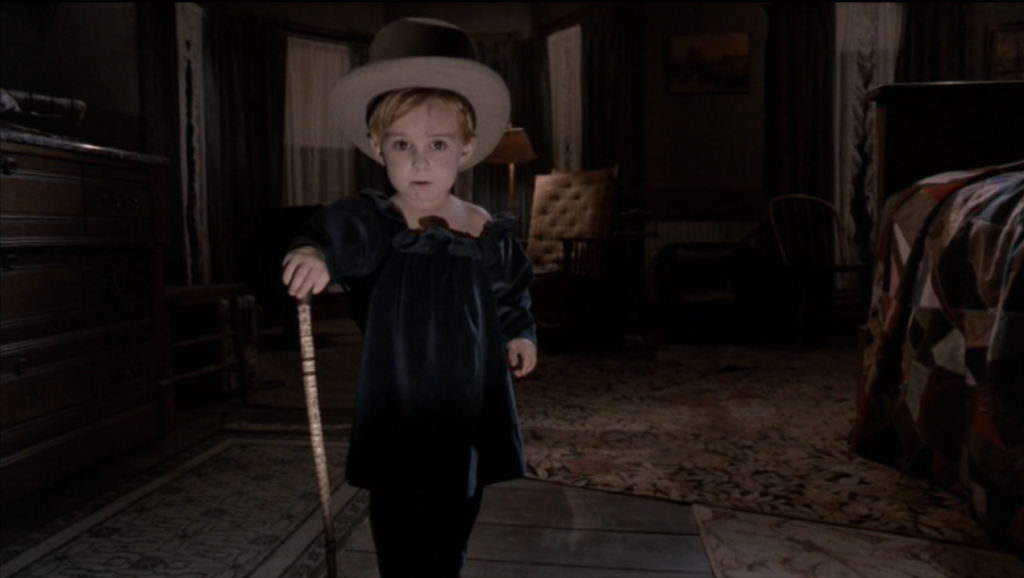