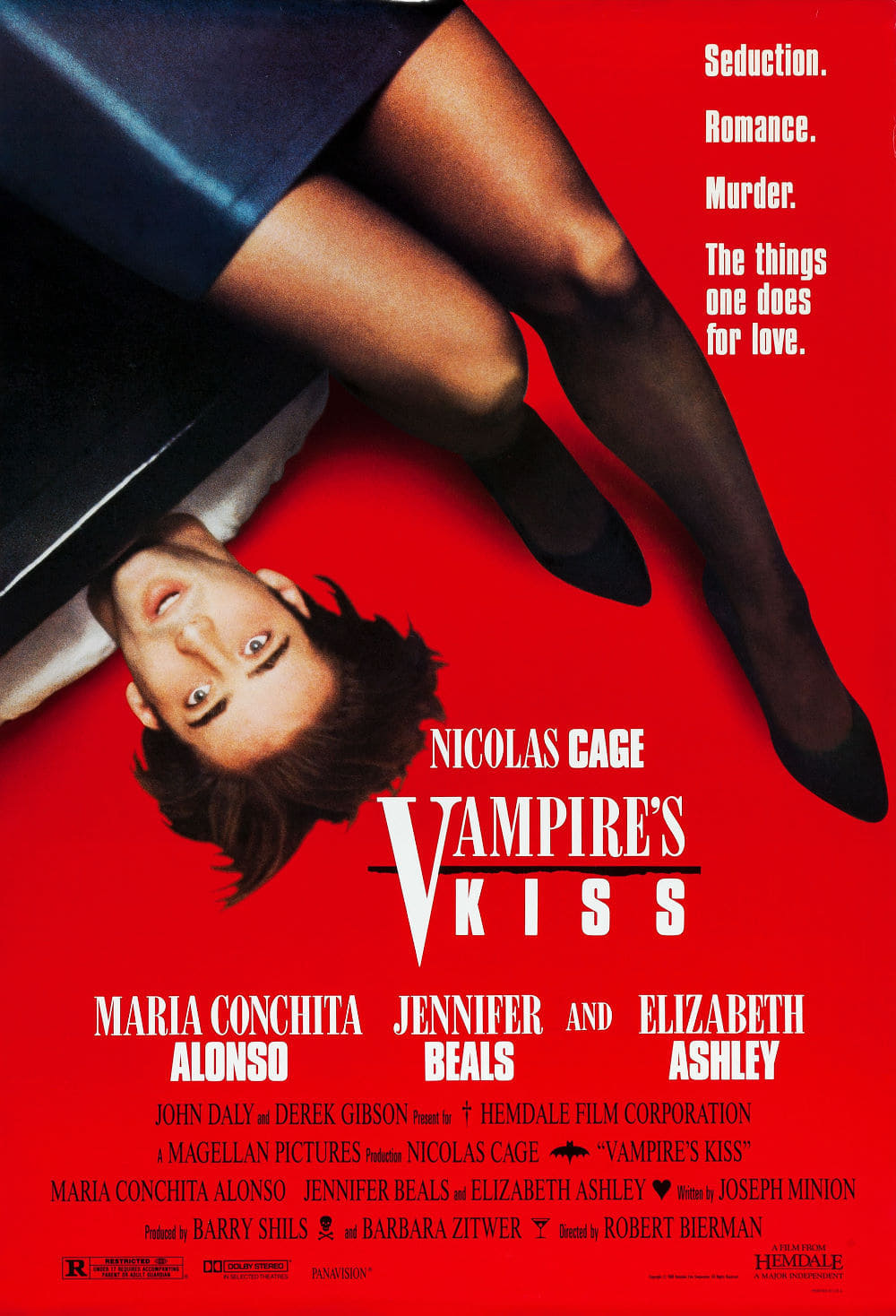 As much as most people know about VAMPIRE’S KISS, if they know anything, is that this is the movie in which Nicolas Cage ate a live cockroach. If that’s what you’ve heard, you have not been misled. But what if I told you that eating a live cockroach is only the fifty-third most bizarre thing Nicolas Cage does inVAMPIRE’S KISS?  Written by Joseph Minion (AFTER HOURS) and directed by Robert Bierman, who was apparently up for Cronenberg’s job on THE FLY, the implications of VAMPIRE’S KISS are positively Kafka-esque. The best way I can describe it quickly would be to call it AMERICAN PSYCHO, only if Christian Bale’s character became convinced he was becoming a vampire. I’m really not sure what happens in the movie is meant to be taken at face value. Is he really becoming a vampire, or is he just really bored? I don’t know. 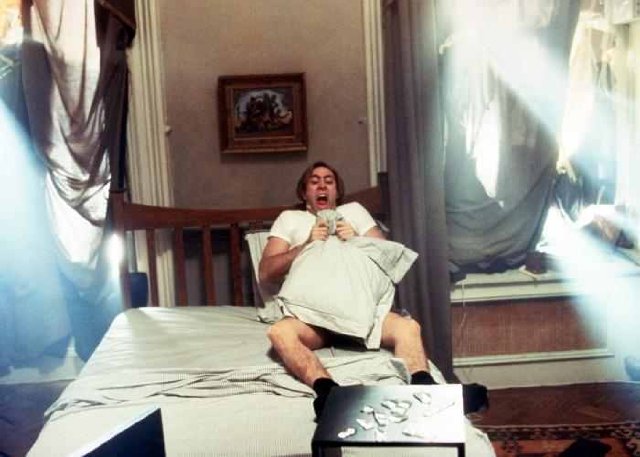 I do know that Cage’s performance in this film is almost literally deranged. In recent years, he has mentioned that his term for the acting style he has devised is “nouveau shamanic” — if that’s the case, then the spirit this particular shaman conjures most frequently is Max Schreck from NOSFERATU. German expressionism in general and that film in particular are massive influences upon the acting choices of Nicolas Cage. You can see it in the way Cage creeps into Kathleen Turner’s room at night in that aforementioned scene from PEGGY SUE GOT MARRIED. You can see it all the hell over VAMPIRE’S KISS. Not for nothing did Cage produce the 2000 film SHADOW OF THE VAMPIRE, which dramatizes the making of NOSFERATU, mischievously insinuating that Schreck played a vampire too well to be merely acting. In SHADOW OF THE VAMPIRE,  Max Schreck is played by Willem Dafoe. One presumes this is because Nicolas Cage had already done it, inVAMPIRE’S KISS, although it should be specified that Cage’s Peter Loew is not a German, he’s a New Yorker who speaks in an effete, faux-British accent. Looking like a goofier version of Ryan Gosling, the young Cage is clearly being allowed to experiment. I don’t know much about Robert Bierman’s work but on the basis of this evidence,  he was no Josef von Sternberg. In other words, he directs his actors on a loose leash. Peter Loew is an oddball creation, still one of Cage’s most manic, long before that extremely fake plastic bat ever flutters through the window.

There are three or four worlds Cage’s character occupies in VAMPIRE’S KISS – his brownstone apartment. which he brings his dates to and later haunts alone; the nightclub world, where he flirts with Kasi Lemmons and Jennifer Beals (the latter of whom he believes to be the vampire who sired him); the expensive office of his bemused therapist (Elizabeth Ashley); and his office at the literary agency where he tortures his sweet assistant, played sincerely by María Conchita Alonso. The workplace scenes are arguably the oddest of all, a reverse take on Bartleby The Scrivener wherein an insane boss torments his all-too-sane subordinate. Some of the broadest comedy in VAMPIRE’S KISS concerns Peter’s treatment of poor Alva, jumping on desks and widening his eyes like a wolf in a Tex Avery cartoon, terrifying her just because she can’t find a single contract he doesn’t need anyway. Even after the situation takes a surprisingly dark turn, the audience keeps laughing, though differently.

I’m not sure I’m prepared to join the cult, because the tone is too inconsistent for me to be able to call this a quote-unquote good movie, but VAMPIRE’S KISS is so aggressively itself that it’s definitely worth a look.

VAMPIRE’S KISS is playing on Friday night at Cinefamily in Los Angeles.