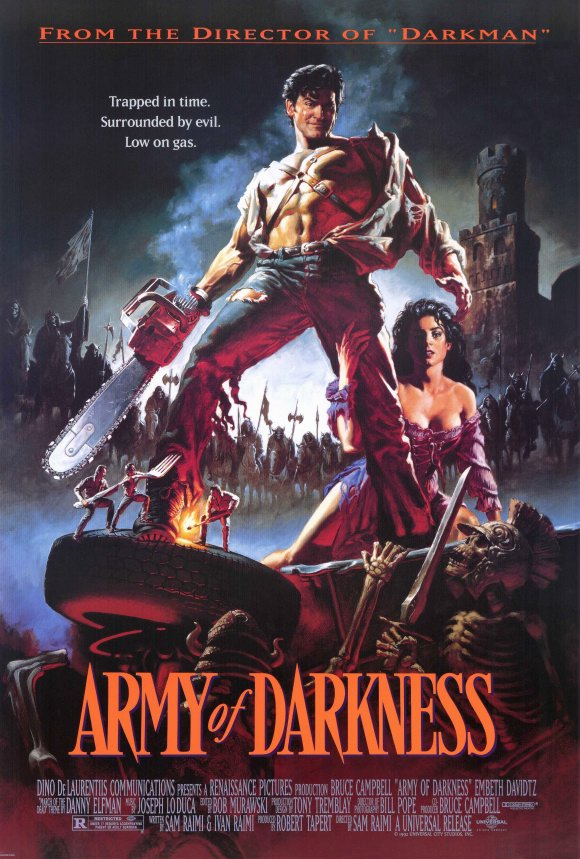 ARMY OF DARKNESS, or BRUCE CAMPBELL VS. THE ARMY OF DARKNESS if you want to go by official titles, is the culmination of the story of THE EVIL DEAD. In 1980, twenty-something director Sam Raimi, producer Rob Tapert, and star Bruce Campbell (among others) went into the woods and came back with THE EVIL DEAD (1981), the story of college students who are picked off by malevolent demons in a cabin in the woods. This movie was such a massive cult success that it led to a sequel, EVIL DEAD 2: DEAD BY DAWN (1987), which was, essentially, a remake of THE EVIL DEAD. EVIL DEAD 2 retained Bruce Campbell as hapless hero Ashley Williams and the cabin and the evil book known as the Necronomicon which unleashes hell, but otherwise was a totally different movie tonally. I named EVIL DEAD 2 on my list of 13 Essential Horror Movies, because even while I feel it’s adequately creepy and spooky where it needs to be, it’s at least half a comedy – truly, no one has been as successful at merging the genres of horror and comedy as Sam Raimi and Bruce Campbell were with this film. That’s an entirely different essay, however.

ARMY OF DARKNESS goes further into comedy than even EVIL DEAD 2 did, approaching the neighborhood of parody at the outer city limits, though never venturing that far. Really, ARMY OF DARKNESS is an old-fashioned swashbuckler in a horror-movie costume. It’s barely scary anywhere in it. That’s not an insult. ARMY OF DARKNESS is filled with so much joy that it can’t help but inspire joy – like the best work of Tim Burton, this movie loves scary stuff and Halloween stuff and skeletons and monsters so much that it couldn’t possibly be scary, because the sense of glee is so thoroughly palpable. In my opinion, it’s the world’s greatest Ray Harryhausen homage. ARMY OF DARKNESS is for the people, like myself, who fervently believe that the skeleton swordfight scene in JASON & THE ARGONAUTS is the greatest action scene in cinema history.

For those who haven’t had the immense pleasure, I’ll quickly explain how we get to the skeletons.

ARMY OF DARKNESS picks up immediately where EVIL DEAD 2 left off. Our hero, Ash, has read in the pages of that dark book, the Necronomicon, a legend of a man who fell from the sky and helped fight off the great evil which Ash and his friends accidentally re-awakened in the modern age. At the end of EVIL DEAD 2, Ash managed to open up a portal which sucked all the evil out of our world, but got sucked through the portal himself, along with his shotgun, his trusty Oldsmobile (actually Sam Raimi’s), and his chainsaw hand (long story). He realized, to his horror, that he’d been sent through time, back to the medieval age written about in the Necronomicon. Trapped in medieval times and hailed as a savior by primitive screwheads.

ARMY OF DARKNESS hilariously picks up on the idea that Ash is far more horrified to be stuck in the medieval past, amongst pretentious British nerds in suits of armor, than to be besieged by hideous winged demons, or Deadites as they’ve come to be called in this era. The primary fun of this movie isn’t just to watch Ash wearily combat yet another hell-demon, but just as much to watch him annoyed by the proper ways and the hero worship of the medieval folk, who initially distrust him and eventually hang on his every word. Ash has a style both old-school irreverent and contemporary ugly-American. He’s like Bugs Bunny meets early-‘80s Eddie Murphy – no respect for anybody, no interest in hiding it. Actually, he’s quite a bit ruder than that. Let’s be honest, as much as all us fans adore Ash, technically he’s a total dick.

Yet, even as we revere Bruce Campbell for his performance, no one ever seems to wonder what became of a single other member of this cast. They’re all basically just golf tees for Bruce to take swipes off. They all have bad British accents, even the ones who probably are naturally British. No offense – they’re all perfect. The bull-in-a-china-shop nature of things is so intrinsic to the comedy that more nuanced supporting performances wouldn’t actually work. Would you ever want to know what happened to the drivers of all those crashed cars in THE BLUES BROTHERS, or how they felt about it? 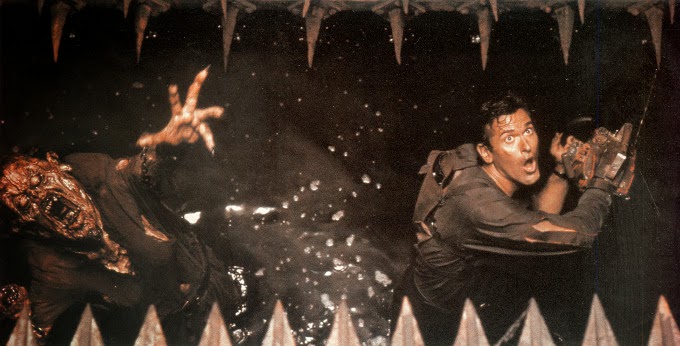 The plot, such as it is, in ARMY OF DARKNESS kicks in when Ash goes to retrieve the Necronomicon in an attempt to find a way to be returned to his own time. He screws that simple task up so brilliantly that he awakens the entire army of the dead, a horde of thousands of skeletal warriors led by a monstrous, decomposing ruler who is a doppelganger of Ash himself – named Evil Ash in the credits and played by Bruce Campbell, both details which I’m sure come as a major surprise.

When the skeletons start marching towards the castle, the movie becomes truly unglued. 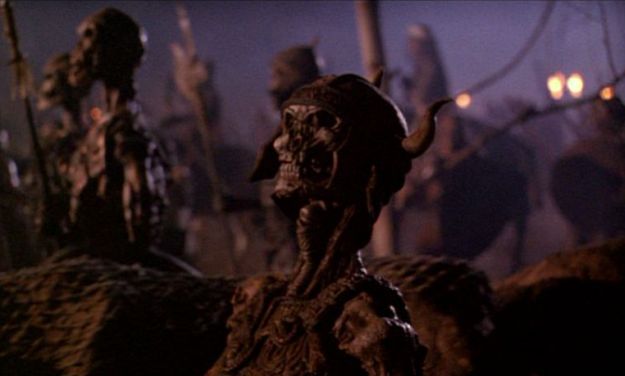 The epic skeleton battle is Harryhausen meets Howard – not Ron Howard, even though the similar medieval epic WILLOW came out just five years earlier, but Moe Howard. You know, of the Three Stooges. Sam Raimi is an avowed fan of the Stooges, and in Bruce Campbell he has a leading actor who is fully capable of enacting that level of brilliant slapstick. Every time I take a couple years away from this movie, I return to fall in love with its ridiculous energy all over again. What cinematic pleasures are much greater than watching a caped Bruce Campbell getting in slugfests with sword-bearing skeletons?

And the skeletons talk.

And the skeletons also have bad British accents.

And most of the skeletons are as fake and as unconvincing as a politician’s integrity. But that doesn’t slow anything down for a minute. In fact, the fakeness, the places where the movie shows its seams, actually go a long way towards making it as wonderful as it is. It feels like somebody (Dino DeLaurentiis, specifically) gave a couple million dollars to a prankster. ARMY OF DARKNESS has the giddy energy of the home movies you might have made in the backyard with your buddies. It often feels – in the love scenes, in the sequence where S-Mart employee Ash absurdly teaches villagers and knights how to fight, in the scenes where the skeletons run from the fight and the human beings rejoice – like some kids watched some old movies and tried to recreate them. At the same time, there are excellently-paced and bizarrely energetic scenes – like the early one where Ash battles the demon witch in the sewer pit – that Raimi reveals himself as the brilliantly original and accomplished world-class film director that he is.

This is why this movie, and Raimi and Campbell and their people, are so beloved by millions of film freaks. They feel like they could just as easily be our friends, because they love the stuff we love as much as we love it — only their home movies are probably much better than ours, and their filmmaking talents are obviously so prodigious.

Sam Raimi went on from here to become an A-list director, most notably with the SPIDER-MAN films of the 2000s. Bruce Campbell has proved to be an odder fit for Hollywood, to his credit. There just aren’t too many venues suited to his unique talents – the guy looks like everybody’s idea of a movie star but he has the energy and the ability to rival the most popular physical comedians. Campbell is like a three-way cross between Kirk Douglas, Jim Carrey, and Superman. I guess if you aren’t Sam Raimi, it’s hard to know what to do with a guy like that. I feel like the Coen Brothers could do something great with Campbell, and I really wish they would, but for now he works just outside the mainstream, working in TV as a day job and occasionally turning out something incredible, like his performance as an elderly Elvis Presley in BUBBA HO-TEP.

Fortunately and unfortunately, there’s nothing quite like the alchemy between Raimi and Campbell, and there’s nowhere better to find it than EVIL DEAD 2 and ARMY OF DARKNESS. Campbell turned in a trifecta of fun cameo performances in Raimi’s three SPIDER-MAN movies, but the EVIL DEAD movies are by far the purest expression of this iconoclastic collaboration.

There are no other movies quite like these ones. What a better, stranger world it is that they exist. 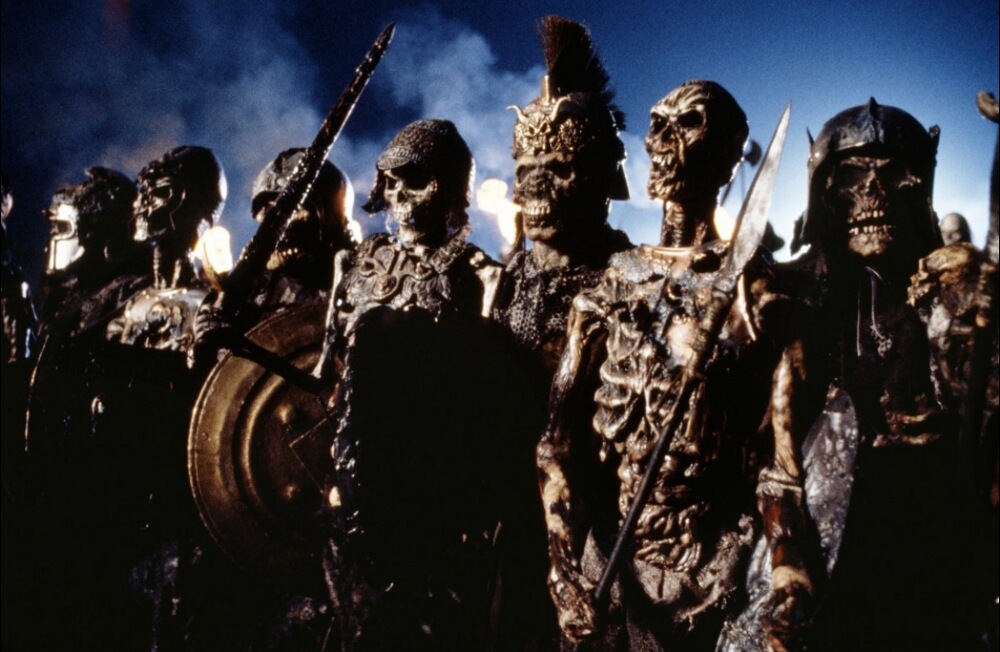 ARMY OF DARKNESS is playing tonight at Alamo Drafthouse in Yonkers.