For many, the idea of a grime coated trek into the deep regions of Italian cannibal exploitation films isn’t exactly the paragon of a Saturday night in; where the depiction of indigenous people as savage killers with a lust for human flesh fills the screen amidst an abundance of rape and mutilation. Even for someone like myself, who willfully embraces the sanguine coated depravity of such gems as I SPIT ON YOUR GRAVE, TENEMENT (a criminally underrated slice of New York sleaze), and MARTYRS – it doesn’t exactly define the notion of enjoyable escapism. Where vile anger permeates the heavy air, animals are unflinchingly butchered in what amounts to National Geographic extremism, native life is woefully shown as uncompromisingly hostile and women are thrown through the ringer of debased ineptitude. There really isn’t much wiggle room for strokes of moral righteousness when every single thing is dripping with an unconscionable muck that, frankly, is quite difficult to scrub off. One such stain is director Umberto Lenzi’s cannibal-cum-cult splatter fest EATEN ALIVE!, which sees the director returning to the jungle eight years after exposing masses to the sordid entrails of the soon-to-be cannibal craze with his 1972 film MAN FROM DEEP RIVER aka THE COUNTRY OF SAVAGE SEX (loosely based off the 1970 western, A MAN CALLED HORSE).

While far from the best the sub-genre has to offer—an honor that goes to Ruggero Deodato’s angelically scored CANNIBAL HOLOCAUST released the same year—EATEN ALIVE! is sort of a fascinating relic of post-free love relevance mired with cultural uncertainty; a film that feels hell bent on releasing as much cruelty to a world poised to censor, despite unevenly touching on a mass infatuation with cult stardom. 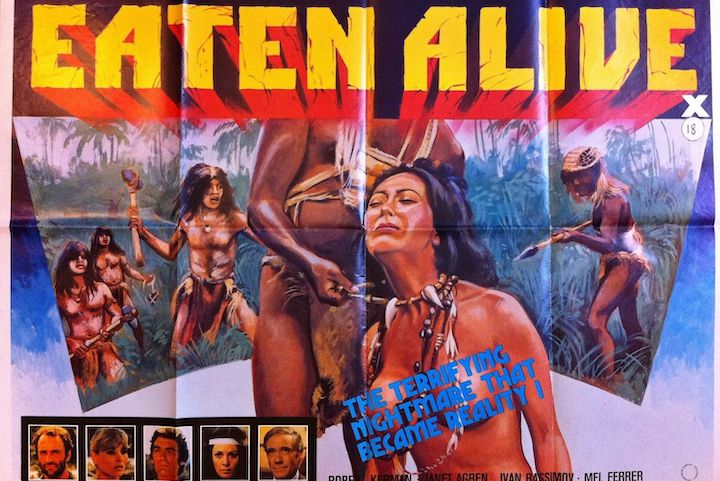 Opening with shots of a thrillingly nasty New York City, where a rather unassuming native assassinates a couple of white business-type folks with poisonous darts before being run over by a truck, EATEN ALIVE! ventures further into the urban jungle by following a woman around Times Square. Neon lights and congested sounds fill the screen as a hand-held camera captures the candid streets before hastily whisking us away to the jungles of New Guinea, where our woman, Sheila (Swedish model Janet Agren, who would later star in Fulci’s CITY OF THE LIVING DEAD) believes her sister Diane (Paola Senatore) has gone missing.

Once there, Sheila encounters lascivious Mark (golden age porn star Robert Kerman), who reluctantly agrees to guide her into the jungle in order to discover the origins of a video recording depicting the last known whereabouts of Diane. Trudging through lush terrain in the unspoilt heart of New Guinea, where 56% is made up of canopied jungle, Sheila discovers that her sister has been abducted and brainwashed by a sinister man named Jonas (Ivan Rassimov)—a striking manifestation of larger than life cult leader Jim Jones. Once within the walls of the pseudo community, constructed with the facade of a civilization of sorts, Sheila and Mark become the subject of their hyper-cruelty, demonstrating white nationalism in the most archaic sense of the term. 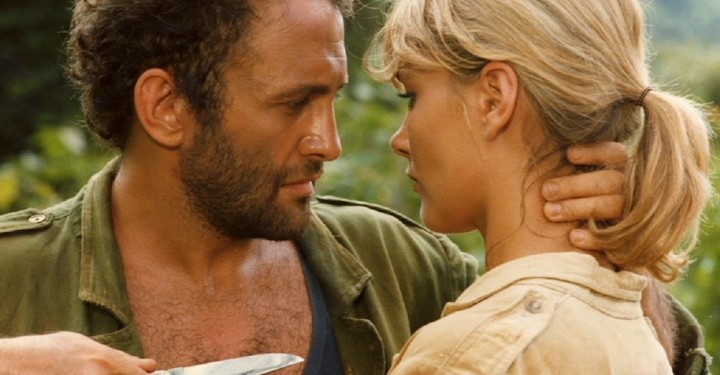 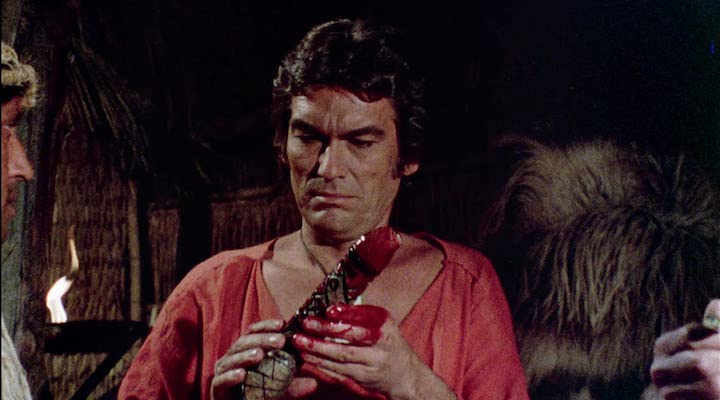 After all, the genre liberally takes from the exotic adventure pictures of the ’30s Pre-Code period, where marketing leaned heavily into interracial sex with films like BIRDS OF PARADISE and more aptly, THE BLONDE CAPTIVE, where a golden headed woman lives among an Aboriginal tribe—the film also depicts the live dissection of a turtle, a trend that would later define the genre’s cruelty towards animals.

Even the action bravado of later films such as RAIDERS OF THE LOST ARK, which dipped its whip in the unbuttoned machismo of ’40s adventure pictures, is far removed from the jungles of the exploitation genre. In one scene, Mark, a far cry from the idolized hero of less grim affairs, is tied up outside and forced to listen to Sheila’s screams while a native removes his watch and laughingly drops it into his pocket. Any other beefed up action flick would have Mark bravely knock out his watches new owner before plucking it from his unconscious body in a rousing escape attempt. Not here though, where moments of glory are few and far between, instead taking pleasure in unshakable and often unimaginable gratuity. 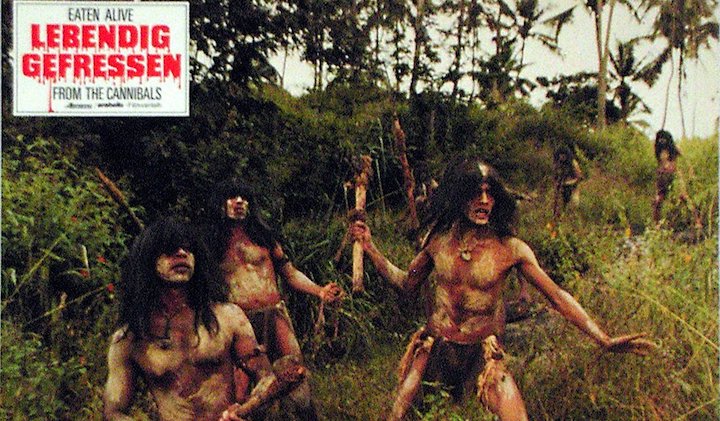 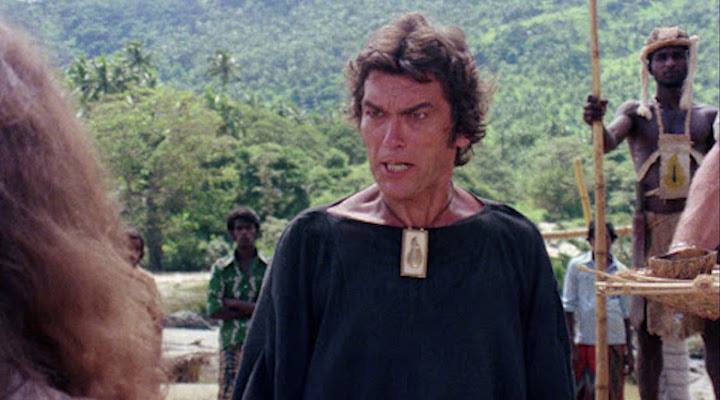 This cultural watermark in EATEN ALIVE! is Lenzi’s particular infatuation with cults, which by 1980 had become a defining characteristic of the turbulent ’70s; a decade birthed by the upending of the counter cultures free love that saw the Manson family amass a devoted following of disassociated hippies. Here, the Jim Jones radicalism of the Peoples Temple is driven straight into the heart of EATEN ALIVE!’s darkness, as the character Jonas gives the film—and the character of Mark, who is far from commendable, all things considered—a flimsy backbone of right or wrong. 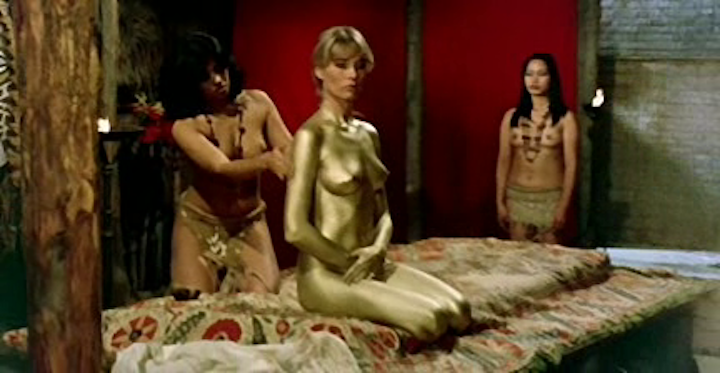 His influence over the film can be seen in his puppeteering of conditioned followers, which extends its contorted hand so far into their minds that every one of them consumes poison in a mass suicide pact; a scene that harrowingly mirrors the real life footage taken after over 900 followers of the Peoples Temple pass the proverbial kool-aid in November of 1978.

Don’t get me wrong, EATEN ALIVE! is a vile exploitation film of the most unsavory kind, one that wrings pleasure out of soiling its undergarments with wanton boundary pushing. Yet, like many of the genres tasteless morsels, it’s what heavy-handedly gives Umberto Lenzi’s film its uncomfortably charming characteristic of impenetrable filth. Because few films even compare to the realism depicted in watching someone munch on a prosthetic limb covered in raw meat, where the crazed line of what’s real or fake is easily discernible to the seasoned horror fan. EATEN ALIVE!, in all of its putrid splendor, remains that time-capsule of corruption, one that far and away demonstrates what it meant to emerge out of a decade terrorized by real people recklessly wielding real fear. 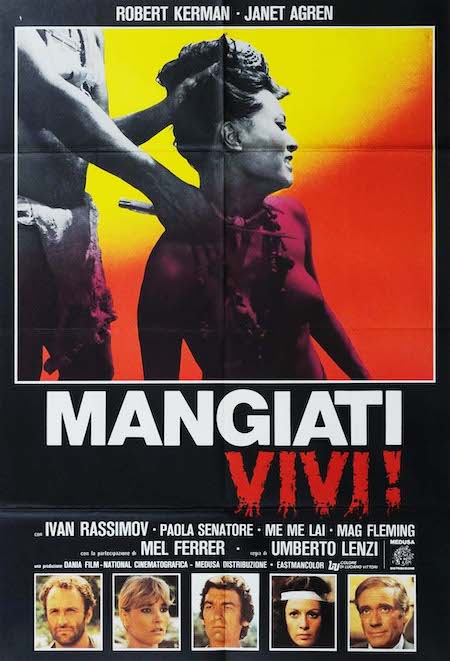