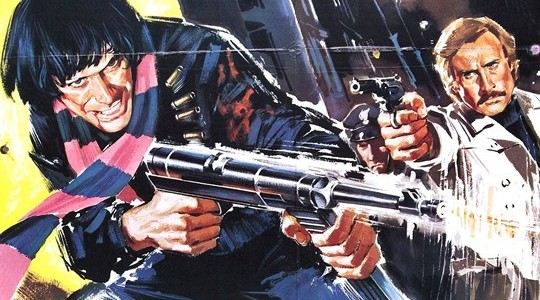 One of the most popular European cinematic sub-genres of the ‘60s and ‘70s was the giallo — a hyper-stylized approach to filmmaking pioneered by Italian filmmakers Mario Bava and Dario Argento, and largely credited as the inspiration behind the slasher sub-genre. Another movement also came to prominence during this time, spearheaded by European filmmakers less interested in depicting the ghastly crimes and more in the ensuing police investigations that looked into them—poliziotteschi: dark and gritty cop and crime thrillers that often offered the same kind of pulpy thrills and graphic violence, but in far less amounts. In American terms, films like DIRTY HARRY and THE LAUGHING POLICEMAN would fall under the poliziotteschi label, even though they were less graphic than their European colleagues. While poliziotteschi weren’t necessarily graphic with horrific imagery, they often could be.

Enter 1976’s THE TOUGH ONES (aka ROME ARMED TO THE TEETH – god, I love Italian movie titles), directed by Umberto Lenzi (the giallo SEVEN BLOOD-STAINED ORCHIDS). Leaning back on the prior example of DIRTY HARRY, THE TOUGH ONES tells your typical story of a police detective making it a personal mission to stop a killer while skirting “official channels” and “the book” in order to make that happen. Detective Leonardo Tanzi (the Franco Nero-looking Maurizio Merli) is that official channels skirter, furious with a system that coddles instead of punishes, and will absolutely, positively get his man — by any means necessary. That man? The very Scorpio-ish Vincenzo Moretto (Tomas Milian), a hunchbacked slaughterhouse worker involved in much bloodier business than merely slicing cows down the middle, and who somehow manages to out-ooze DIRTY HARRY’s Andrew Robinson. (“I shat this out just for you,” he tells Tanzi at one point, holding up a bullet that Tanzi forced him to swallow in a total act of male dominance earlier in the film. Talk about having explosive poop! I’m sorry!) 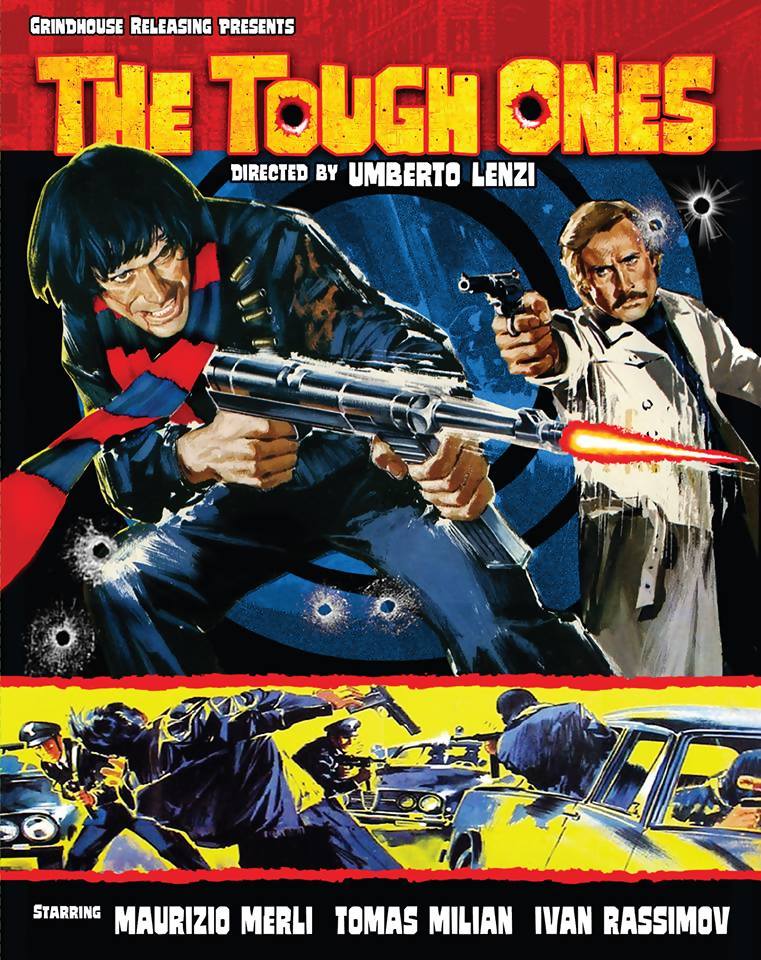 THE TOUGH ONES is hard-hitting and angry. Everyone is angry at everyone else. Tanzi hates Moretto, who hates him back. Tanzi and the police chief share an equal and mutual hatred. Tanzi, at times, even seems to hate the very woman he’s dating (Maria Rosaria Omaggio), as she basically represents the liberal society that releases all of the criminals he arrests on a daily basis. Like other films from this time period, and especially with it being an Italian production, THE TOUGH ONES is very much indicative of its era. It’s impatient and cynical like lots of ‘70s cinema, with the added discomfort of pure misogyny, perpetrated against every single female character, and often at the hands of our lead hero. At the worst of them is a random rape attack committed by a group of thugs, most of which is thankfully left to the imagination, along with a disturbing insinuation that, post-rape, the victim was additionally sexually assaulted with a tree limb. There’s more than one instance of a woman being slapped, or talked down to, or outright threatened – not a single female character walks away unscathed in some form or another. Most cinephiles already well versed in this era of filmmaking likely won’t be surprised or turned off by this, but for those of you just getting started, best prepare yourself now.

Most importantly, Lenzi knows how to stage exciting action sequences, with the standout being an extended car chase that directly leads into the finale. The chase never reaches the heights of the graceful automotive ballet Bill Hickman achieved during his stunt driving in the likes of THE FRENCH CONNECTION, BULLITT, and THE SEVEN-UPS, but only because Lenzi wants the car chase to look manic, gritty, and very dangerous instead. Leading up to that is an impressive barroom fight, which sees Tanzi taking on a Van Damme level of henchmen and reigning supreme. (A punk gets his head smashed through the glass top of a pinball machine and it’s the most satisfying thing.) The shootout during the climax, also, gets that blood pumping – that fun, unrealistically bright kind not seen since Romero’s DAWN OF THE DEAD. Like most Italian genre flicks, the plot doesn’t fully gel, and the editing can sometimes make the film’s events hard to follow, but, like BULLITT, the plot of which is near incomprehensible, Lenzi’s visceral way of presenting the story and the action make up for the weak cohesiveness.

From a technical perspective, THE TOUGH ONES looks and sounds fantastic, lovingly restored for a 4K presentation. The release comes with both English and Italian audio tracks, along with English subtitles for the Italian track only. You can attempt to watch English with English, but the subtitles barely match; the intent is the same, but the dialogue is always different. (One of the best examples of this is when someone calls someone else a “dummy” onscreen, but the subtitles replace it with “proletarian,” which I found very amusing.)

As typical for a title from Grindhouse Releasing, this new edition of THE TOUGH ONES comes absolutely packed to the gills with special content, not the least of them being a third bonus CD of the film’s soundtrack by Franco Micalizzi. Most viewers will likely start with the new interview with director Lenzi, which runs 55 minutes in length. Lenzi starts at the beginning of his career, talking about how he got started, along with his admitted comfort in working in the crime genre over horror, despite his having contributed several titles to the latter. But if there’s a must-watch supplement on this release, it’s the 90-minute(!) interview with Tomas Milian. He explores similar ground as far as his start in filmmaking and acting, but his interview begins with a deeply personal and sad account of his childhood at the hands of loveless and abusive parents. If you’re anything like me, you’ll be hooked on his every word following this stunning admission.

The complete list of special features included on this release is as follows:

THE TOUGH ONES is now on Blu-ray from Grindhouse Releasing.