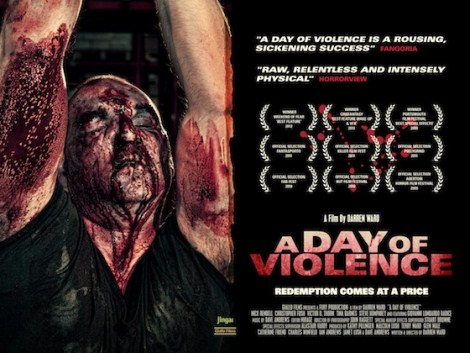 Having excessively gruesome violence is an easy method to make your low-budget genre flick stand out in a crowded field, so it’s no wonder that MVD, U.S. distributor of A DAY OF VIOLENCE have made the films’ bloody qualities front and center. Between the festival notices on the sides, there’s the blood-drenched body of the lead, coupled with several quotes about how “relentless” and “sickening” it is, sure to lure in gore fans who would ordinarily pass up Darren Ward’s British gangster pic, a follow-up to his similarly-brutal SUDDEN FURY just now finding a stateside release.

The trouble with this approach is that it doesn’t matter how graphic the violence is if the film itself is technically inept or the characters on screen aren’t interesting to watch. A DAY OF VIOLENCE has no problem on the former – Ward shows that he knows how to craft a film though editing and a consistently grimy look helps overcome the low-budget origins. The latter is a tougher sell, as A DAY OF VIOLENCE is filled with unsympathetic characters that serve little purpose other than escalating the bloodshed. 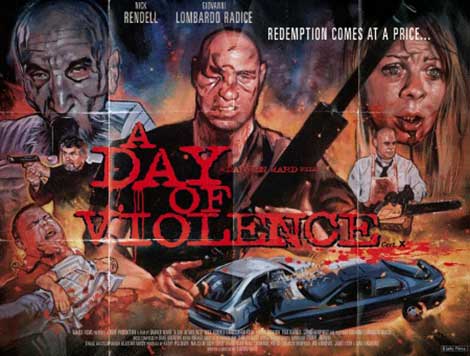 Nick Rendall stars as Mitchell, a debt collector working for a stereotypical mob boss, and we know his fate from early on in the film as we see his naked, lifeless corpse on a coroner’s slab narrating how he ended up there via voice-over. The film then cuts back six months to the time when he discovers 100,000 in cash (presumably in pounds, though the film never specifies) while ransacking the house of collectee on a standard outing, so he offs the creep and takes the cash. Little does he realize that the cash belongs to the mob boss for whom he’s about to be employed, and that his victim has managed to record the theft thanks to his camera phone. 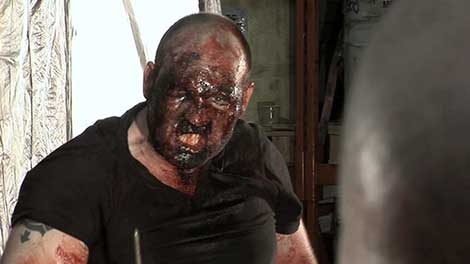 The first half of the film is solid period of genuinely tense interplay between Mitchell and the mob, wherein our antihero attempts to act as casually as possible until his accidental betrayal is revealed. The highlight of this is an excruciatingly explicit castration sequence involving a friend of Mitchell’s, making you realize that the casting of CANNIBAL FEROX’s Giovanni Lombardo Radice was no coincidence. Ward does a fine job wringing suspense from the set-up, and Rendall makes a believably nervous lead.

Unfortunately, as good of a performance as Rendall gives, everything goes downhill in the second half after the mob boss figures things out and it becomes a straightforward man-on-the-run flick. We’re asked to sympathize with Mitchell, but he’s not a sympathetic figure no matter how much the film tries to give us reasons to think he’s just doing this in order to pay for his daughter’s live-saving operation. He’s still just a twitchy guy who got in with the mob and makes no bones about killing anyone in his way, regardless of if they’re involved or not, and while this can be fun to watch in the right context (see Jason Statham in, well, anything, basically), A DAY OF VIOLENCE isn’t a strong enough film to make a steady stream of bloodletting engaging on its’ own. There’s not even much in the way of a charismatic head villain — the bad guys are an interchangeable bunch of stooges that may as well have been played by stock hoods from a late-‘80s side-scrolling beat-‘em-up, and the boss (Victor D. Thorn) gets to spit some attitude but little more between the unremarkable dialogue.

Those just looking for blood, however, will find A DAY OF VIOLENCE to be filled with the stuff – there’s plenty of torture, gunfire and arterial sprays to justify every word extoling the film’s graphic nature on the box cover, and it even has the decency to start with a fairly explicit sex scene just for the sake of pleasing the flesh hunters as well. It’s a shame that it doesn’t offer much more than that, as it gives the idea that Darren Ward could churn out a really impressive piece of grindhouse cinema if he’d work as much on the script as he does on the carnage.