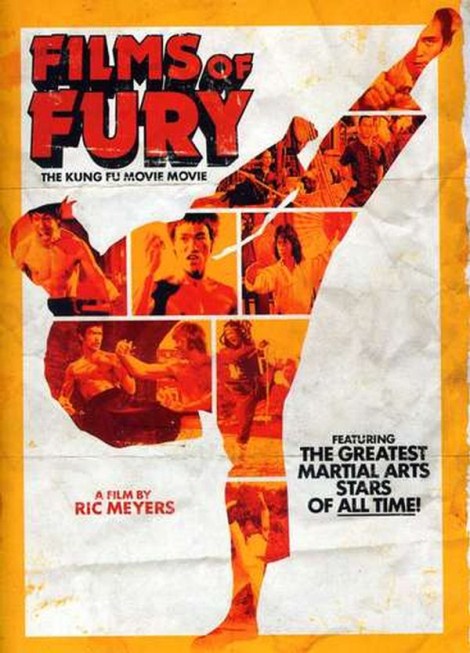 I consider myself something of a neophyte when it comes to martial arts films, at least in comparison to a lot of those in the cult film community.  Sure, I’ve seen a fair share of Jackie Chan and Bruce Lee films, but I’ve probably watched fewer than a dozen tales the involve shaolin temples, and I couldn’t name more than one Shaw Brother if you threatened me with a flying guillotine.  (There’s Run Run, obviously, but after that I’m grasping at straws – Artie?  George Bernard?   See, even my Shaw Brothers jokes are terrible.)

Ideally, I’d be the perfect audience for FILMS OF FURY: THE KUNG-FU MOVIE MOVIE, a new-to-Netflix-streaming documentary about the history of martial arts films, made in conjunction with the book FILMS OF FURY by Ric Meyers, who wrote for Asian Cult Cinema for years and is thought by some to be one of the premiere experts of the genre.   I was a willing student, interested in what I could be taught by someone whose knowledge of the field far exceeded anything I’d researched.

Coming off the heels of the likes of AMERICAN GRINDHOUSE, NOT QUITE HOLLYWOOD and CORMAN’S WORLD, you might be expecting FILMS OF FURY to be formatted in a similar way, combining interviews with film footage and chronologically taking you through the history of the genre as a whole.  It’s even from Lux Digital, who produced AMERICAN GRINDHOUSE.  Unfortunately, there are no interviews to be found here, as the film takes the form of animated scenes set in a shaolin video store as the video clerk attempts to educate his silent customer on the ways of the dragon.  There are film clips galore in between the animated sequences, as the video clerk breathlessly narrates them, extoling their virtues and explaining who shot what film when.

It’s not exactly a good way to format a documentary, but it could have worked if the narration supplied much in the way of consistent, understandable information delivered in a professional way.  Sadly, the first warning sign that this isn’t going to be the case when the opening credits are backed by Ash’s overplayed 1996 semi-hit “Kung Fu,” the default “go-to” at this point for martial arts film clip producers too cheap to spring to give Carl Douglas a few bucks for “Kung Fu Fighting.” 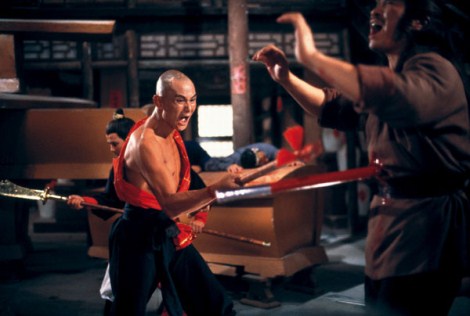 The next 70 minutes are essentially the cinematic equivalent of a juiced-up video clerk who thinks he knows more than he does ranting at you excitedly.  The definition of “kung fu” is loose enough to include SINGING IN THE RAIN, allowing the narrator to talk about Buster Keaton’s kung fu prowess, because it’s “balance and serenity and stuff.”  The proper kung fu era allegedly begins with King Hu’s TOUCH OF ZEN in 1971, as though martial arts had never been filmed in China before, and then the film backtracks to FROM RUSSIA WITH LOVE in 1964.  We hear that Chang Cheh, who “replaced” Hu as the go-to director, wanted to “make films for men” after being told that “only women had time for going to films,” without explaining if anything had changed culturally so that men were suddenly able to take time off.  Bruce Lee first appears in the film with mentions to his appearances in MARLOW, “Ironside” and “Longstreet,” before going on to mention “The Green Hornet,” which was made before all three!  Soon after, we then hear a story about how Lee was called “Three Kick Bruce,” backed by a clip of him using four kicks.

The film continues to move back and forth in time, throwing film clips out almost randomly and giving little sense of context, cultural significance or even how the films were received or distributed.  SPIRITUAL BOXER is called “a surprise hit” and “not exactly what audiences were looking for” in the same sentence.  Few connections between the actors it identifies are mentioned – it even shows a clip from PAINTED FACES while describing Jackie Chan’s career without mentioning that the film is about Chan’s youth at the China Drama Academy with Sammo Hung, who appears in the clip!

All of this time-shifting and distortion of facts would have been okay if the narration itself didn’t feel as though it was talking down to the audience.  But the excitable way films are described (Chang Cheh’s FIVE ELEMENTAL NINJAS is his “last great martial Arts flick,” 36th CHAMBER OF SHAOLIN is the “greatest training sequence ever filmed”) and incongruities in his logic (He’s morally outraged by the re-cut, finished version of GAME OF DEATH completed after Bruce Lee’s demise, but when the same thing happens to EIGHT DIAGRAM POLE FIGHTER, he’s more interested in the climax) that it wears you down and you can’t help but start to pick nits just because this guy’s so intolerable that you want to argue.

The biggest, and oddest, omission is that of the Shaw Brothers.  While we see the title card and the Shawscope logo, the studio and the people behind it are completely absent from the narration.  Even for someone whose knowledge of the genre is as limited as my own, it’s feels a bit like if MACHETE MAIDENS UNLEASHED! had neglected to mention Roger Corman.

With all of this said, FILMS OF FURY does have a lot of good film clips, and introduced me to a few martial arts flicks of which I’d been previously unaware – LEGENDARY WEAPONS OF CHINA and EIGHT DIAGRAM POLE FIGHTER look great.  There’s also a fine bit that shows how POLICE STORY was ripped off by both TANGO & CASH and BAD BOYS II, edited together WHO DO YOU THINK YOU’RE FOOLING-style.

FILMS OF FURY was reportedly a troubled production, and Meyers was originally offered a chance to direct and produce as well as write the screenplay, and he’s been vocal about his issues with the format.  But there’s so much slipshod work in FILMS OF FURY that it’s hard to figure out what the audience was in the first place – newcomers will be confused and disoriented, and it offers nothing in the way of new information for anyone whose knowledge of the genre goes beyond the latest Donnie Yen movie.

There’s certainly a place for the a great documentary on the history of martial arts films (1992’s THE DEADLIEST ART isn’t bad, though it is dated, and 2002’s THE ART OF ACTION is cursed with a generic name but is pretty good) or even just on a single person or subgenre – hell, I’d love to see a film or book on the history of Brucesploitation – but FILMS OF FURY misses the target by at least three four kicks.