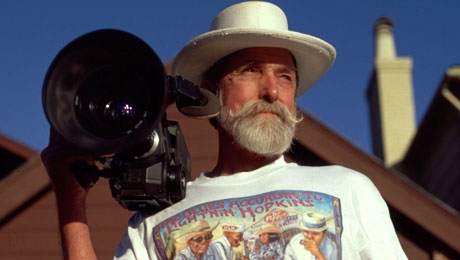 Just as last week ended with the death of beloved critic Roger Ebert, this week begins with the news of another legend who saw the credits roll on a quiet life. Acclaimed documentary filmmaker Les Blank died Sunday at the age of 77 after a battle with bladder cancer. With nearly 40 films to his credit, Blank covered subjects ranging from Dizzy Gillespie to Werner Herzog eating his shoe (his most famous piece which captures Herzog making good on a bet he made to his friend Errol Morris). Though he was adored by critics and filmmakers, his films never found the traction with the public, in part due to Blank’s nature which was very low-key. Hopefully, new light will shine on his work which seems perfect for a boutique label to pick up and distribute to the masses.

New York Times has a great piece on the filmmaker which includes a quote from Blank on his technique:

A shy, quiet man, Mr. Blank achieved a kind of intimacy in his work — his subjects often seem almost impossibly at ease — that suggested the camera had been unobtrusive, or perhaps a welcome guest. Mr. Blank sometimes lived among the people he was filming for weeks at a time.

“I try not to make a big deal about the camera, to let it get between me and them,” Mr. Blank said in 1979. “I’ve seen a lot of cameramen go in and treat the subjects like so many guinea pigs. I think the people pick up on my very protective feelings toward them, and they aren’t self-conscious about what they do or say, and they try to show the inner light about themselves that I find so attractive.”

For more on Les, check out his IMDB page.

See you on the other side Les, you will be missed.