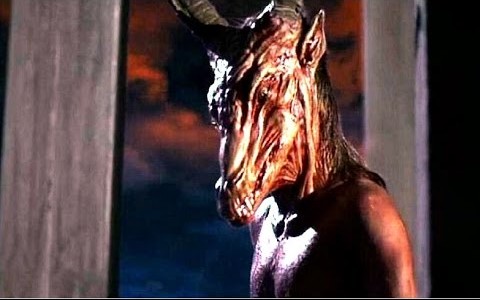 Who doesn’t love an advent calendar? Around the Daily Grindhouse virtual offices, we decided the only way to make the advent calendar better is to replace what you might traditionally find behind the door with Christmas horror movies! So everyday from December 1st through to Christmas, we will be highlighting a different movie for our horror-loving readers to celebrate the season. Our film for Day Sixteen is THE DAY OF THE BEAST!

Christmas Eve is on the horizon. Father Cura (Alex Angulo), a harried priest, rushes into the sanctuary of his church, thrusting a pile of papers into the face of his praying colleague. He’s found the answer, or thinks he has. The Antichrist is coming, and the only way to stop him is to sin. The other holy man is on board, but warns him that this mission could be dangerous, that the forces of evil could be listening, watching and ready to do whatever it takes to stop them in their mission. And then gets up, walks away…and is promptly crushed by a falling stone crucifix.

Thus begins Spanish director Alex De La Iglesia’s 1995 cult oddity THE DAY OF THE BEAST (EL DIA DE LA BESTIA in the director’s native tongue), a pitch dark comedy that aims to put a little hell into the holidays. It starts off from an idea so ingeniously sick, you wonder why a horror film hadn’t thought of it prior: a pious man of the cloth, earnestly devoted to serving Christ, his lord, decides that the only way to defeat the Antichrist, to trick Satan himself, is to sidle up to the Beast and act like a devotee of evil, all in order to raise–and then kill–the Dark Lord. 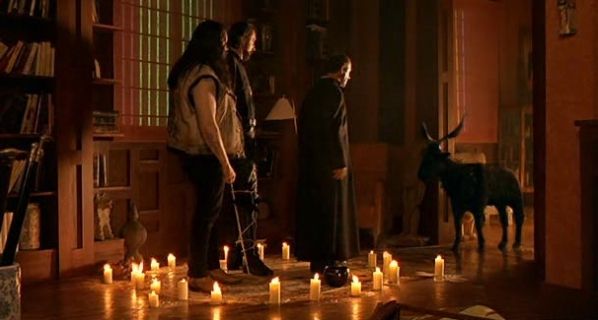 That’s a kicky idea for a dose of bad taste horror hijinks, and De La Iglesia runs with it. THE DAY OF THE BEAST was the director’s second film, following his microbudget breakthrough ACCION MUTANTE, which earned De La Iglesia international acclaim. It cemented the filmmaker’s reputation for offbeat, button-pushing wildness, something he’s staked a cult career on through the subsequent decades, churning out wildly eccentric features like the hyper-violent Javier Bardem/Rosie Perez road movie PERDITA DURANGO (aka DANCE WITH THE DEVIL) and battle-of-the-sexes witchcraft comedy WITCHING & BITCHING.

Except for a few yuletide trappings, there’s nothing really Christmas-y about THE DAY OF THE BEAST, instead simply using the holiday for its Christian trappings, and the rather obvious convenience of making Jesus’s birthday also be the birthday of his mythic evil twin, the Antichrist. De La Iglesia doesn’t take any of this religiosity seriously, burying his tongue firmly in cheek and treating both his sincere man of the cloth, his allies and their demonic adversary as the cartoons they are. Father Cura is so single-mindedly devoted to his cause, so childishly forthright to anyone who will listen, that he’s almost sweet–and that’s why we can watch, and stay on his side, as this paragon of societal morality decides to let loose and break the rules, which starts with something as simple as sneaking a cigarette to full on watching a homeless man get beaten and set on fire, not intervening even as he resists every urge to give in to his better nature.

Along the way, he’s joined by two sidekicks: Jose Maria (Santiago Segura), a metalhead record store clerk who gleefully joins in on Cura’s quest while even more gleefully introducing him to the death metal scene; and Cavan (Armando De Razza), a preening, David Copperfield-like TV star occultist, who gets kidnapped by Cura and Jose Maria and eventually comes to believe their stories of potentially demonic takeover on Christmas Eve.

Much of the first half of THE DAY OF THE BEAST has Cura trying to become the worst he can be, all in the name of good. Cura’s a fundamentally decent man who’s trying his darnedest to do evil, and Angulo’s sincere performance and fumbling attempts to go rogue does a lot to make the character sympathetic–in a lesser performance, we would have just seen a man acting with utmost cruelty, but we understand the impulses that actually drive him, and Angulo bounces well off Segura, who plays Jose Maria as a cheerful, jovial wildman.

That said, De La Iglesia teases us about the veracity behind Cura’s campaign, keeping it ambiguous as to whether the priest is in the right, or if he is simply just using God as a justification for his own barely concealed madness. Squint and you can see a political allegory in De La Iglesia’s film, something about the hypocrisy of Christian institutions and the way they use piety and “goodness” as an excuse for violence and cruelty and the demeaning of others. It’s telling that, although Cura starts off as a priest, it’s Satanism and the occult that, in fact, help him, that, by increasingly eschewing the bonds of Church does he grow closer to doing genuine good. That said, politics are not at the top of De La Iglesia’s concerns. He wants nothing more than to provide a cheekily blasphemous thrill ride, full of quirky characters and naughty humor and hair-raising escapes, and, on that note, he succeeds. There’s a part of me that thinks he could pushed a little more into the blasphemy–a little more outrageous, a little more mean-spirited–but that also could have thrown off the dizzying balance the Spaniard sustains. THE DAY OF THE BEAST may not exactly be a traditional Christmas movie, even by the standards of the horror genre, but it’s a perfect one for those who want to thumb their noses at the “Christ” part of Christmas.