When American Horror Story premiered in October of 2011, it garnered the best numbers that FX had ever received for a series premiere. But that really shouldn’t have come as a surprise, since creators Ryan Murphy and Brad Falchuk had previously brought the groundbreaking medical drama Nip/Tuck to the network back in the summer of 2003. Nip/Tuck became the highest-rated new series on American basic cable and can be credited—alongside The Sopranos—as ushering in the “neo-network” era of television. Nip/Tuck ran until 2010, with Murphy leaving as showrunner to head Fox’s teen musical drama Glee. Murphy explained that after shifting gears to something a little more nice and even family friendly with the high school drama, that he “wanted to do something challenging and dark.” Both he and Falchuk were longtime fans of the horror genre, and nowhere was that more evident than in episodes that featured the villainous slasher, The Carver, who debuted halfway through Nip/Tuck’s second year. The third season of the series set the stage for American Horror Story’s “everything and the kitchen sink approach,” defying genre by blending erotic thrillers, slasher movies, and a soap opera into a kinky, gory, scary, and totally fun 15 episodes. 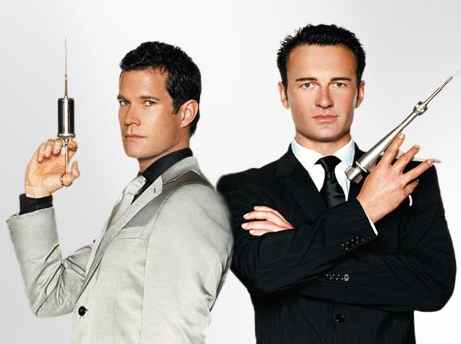 When Nip/Tuck carved its way onto basic cable network FX back in ‘03, it became known for its bloody and realistic surgery scenes and hypersexuality. Cribbing from ‘80s Paul Schrader, the series never shied away from utilizing kink and fetish in its lurid storylines (always with a notion of knowing respectfulness), and cast it all in primary colors, slick chrome, and sultry neon. It was at once a wry parody of soap operas, and also the wildest soap this side of NBC’s Passions. Viewers couldn’t get enough of sexy, sleazy Dr. Christian Troy (Julian McMahon) and the slightly less sleazy Sean McNamara (Dylan Walsh), two materialistic Miami plastic surgeons that seem to have walked off the pages of a Bret Easton Ellis novel. The provocative storylines and extreme surgery sequences—generally cut to classic Top 40 hits—shocked and titilized suburban housewives and househusbands across the country. In less delicate hands, the show could have come off as misogynistic, featuring two unsavory, materialistic men as main characters who were constantly bedding women and had generally loathsome and reprehensible ways. With Ryan Murphy at the helm, the show “trojan horsed” an innate queer aesthetic into the show, introducing elements of camp (but never getting too silly) and casting gay icons from Joan Rivers to Richard Chamberlain in surprising roles. 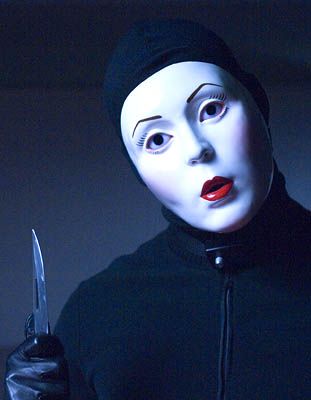 The show always had horror in its D.N.A.; the surgery scenes at times recalled David Cronenberg’s DEAD RINGERS, particularly in one episode where Troy and McNamara don red surgery gowns. Halfway through the second season, Murphy introduced The Carver: a serial rapist who maimed and killed his victims (although he only killed one). Murphy only intended The Carver to be a “one pop thing,” but the response was tremendous from fans of the show. “People liked that character so much that he was sort of both a villain and an intellectual force on parallel with [Sean and Christian]” explained Murphy. The Carver had an iconic costume, which in true Nip/Tuck fashion was made by Prada (the Winter 2004 collection to be precise) and a terrifically creepy porcelain mask that recalled ALICE, SWEET, ALICE. Like a Miami Freddy Krueger, The Carver even had a catchphrase, “Beauty is a curse on the world.” The sequence in which The Carver attacks Dr. Sean McNamara expertly plays with the slasher movie trope of the victim in the shower, turning it on its head by featuring a man in the vulnerable role, right down to the way director Michael M. Robin utilizes a mirror cutaway/reveal for the scene’s big reveal that The Carver is right behind Sean. It’s a move right out of the FRIDAY THE 13TH playbook.

The second season of Nip/Tuck ended on a cliffhanger, with The Carver attacking an unconscious Christian Troy in his bedroom. In 2005, Nip/Tuck premiered in the fall instead of the summer like its previous seasons. It was a risk for the network, but The Carver was on the tip of everyone’s tongues. It was like a modern day “Who Shot J.R.?” for those in the know and the third season’s finale became one of the highest rated scripted programs in the network’s history. Murphy has been adamant that a show is only as good as its villain, and while Nip/Tuck has certainly featured an impressive and varied rogues gallery, from chilling drug kingpin Escobar Gallardo (Robert LaSardo) to the gleefully bonkers Colleen Rose (Sharon Gless), The Carver is the most memorable.

With each season of American Horror Story, fans muse on what style of horror film Murphy and his crew are going to subvert: they’ve done haunted houses, witches, freaks, creepy nuns, and even aliens. This season, Murphy is even crossing over characters from Coven and Murder House for Apocalypse, what can be assumed to be a take on devil movies like THE FINAL CONFLICT. Of course, it is never that simple. Asylum incorporated musical elements, and Cult even delved into political satire. The third season of Nip/Tuck had its “own world” explained Dylan Walsh in a making of featurette, and that world set the tone for what would become American Horror Story. The Carver storyline represents an almost 15 hour erotic slasher mystery, even if every episode is not focused on the big bad. The third season was much darker and violent than the previous years of the show, but that intangible Murphy touch is what really endeared to fans of the show and those who came on in the midst of the mystery. Even for a serialized soap such as Nip/Tuck, it’s pretty easy to use this as a starting point.

Fans seem to be clamoring for a slasher season, but it would be hard to top The Carver in terms of story, and let’s face it, one of the most important aspects of a slasher: the costume. It’s a short walk from The Carver to the Murder House.  For better or worse (especially when considering later seasons of American Horror Story) that intangible Ryan Murphy touch is indeed what made Nip/Tuck and now the American Horror Story franchise memorable. “I think he is an amazing, creative force, especially with horror,” explained Jason Blum, who co-produced 2014’s THE TOWN THAT DREADED SUNDOWN with Murphy. “I think he thinks about horror in a really unique way.” American Horror Story appears to be focused more on the supernatural for now, but for fans who can’t get enough of slick, provocative, horror from Ryan Murphy, The Carver may be just what the doctor ordered.