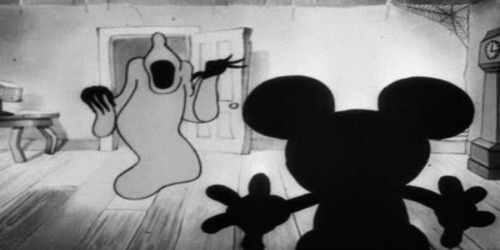 THE TEXAS CHAINSAW MASSACRE was the first film that terrified me. Not just gave me the creeps, but terrified me. For a good solid month after viewing that film I was convinced somebody was going to walk into my bedroom with a chainsaw and make ground beef out of my favorite body parts. HALLOWEEN is a close second and despite not being really a true horror film, CARRIE is third. A close fourth however is the one where that cute little mouse from the Magic Kingdom gets tortured by a mad doctor.

Cartoons weren’t scary when THE FLINSTONES visited Frankenstone or when FAT ALBERT and his friends celebrated Halloween in the ‘hood, but something special happened when you gave an animator 5-7 minutes to tell a story of haunts and frights. It created a unique little piece of macabre that was subversively terrifying or (even better) sanitized horror that was often more terrifying than a slasher film.

This is not a Top 10. You could easily arrange these from best to worst, the artistic merits of one over the other, but these are all on the same level for me so the thought of saying one was better than the other isn’t something I could do. Some are cool, some are scary, but all are classics. Here’s to all the nightmares coming your way on the 31st of October and to everything that goes bump in the night. Dig it!