Our good buddy Mike Vanderbilt stirred up a hornet’s nest over at the A.V. Club today when he dared to suggest that 2012’s RED TAILS deserves a second look for the first time. He’s right, by the way. So this post isn’t an “answer track” in the modern hip-hop sense of the term; it isn’tt meant to start a feud with anybody, except maybe the kinds of anonymous jerks who write mean things on the internet against talented writers. But let’s start with the movie.

RED TAILS is a big-budget rendition of the exploits of the Tuskegee Airmen, the 332nd Fighter Group of the United States Army Air Corps during World War II. The Tuskegee Airmen were the first African-American pilot squad in our country’s history, a fact that means everything. Remember that the seeds of the Civil Rights movement were still ten years away, and desegregation was not even officially a word. 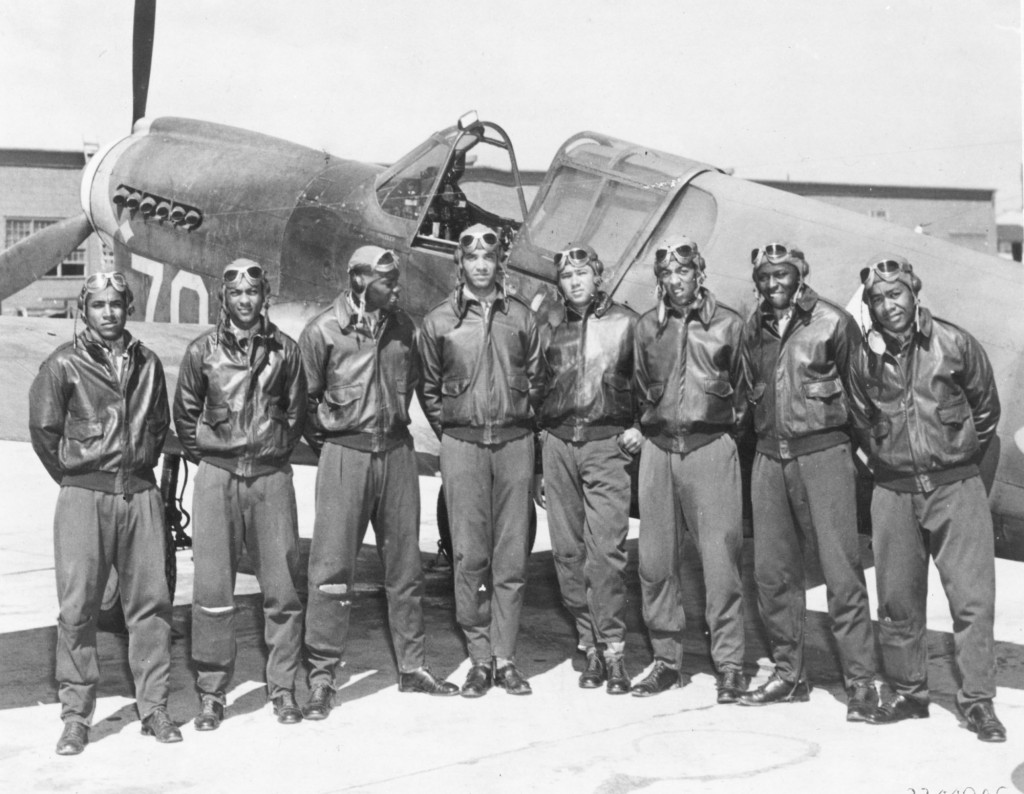 The Tuskegee Airmen weren’t just a noble concept; they were all-the-way heroic. So named because they were trained in Tuskegee, AL, these pilots were the result of twenty years of advocacy by, among others, African-Americans who were barred from service in the first World War. Before they could fly combat missions (a sore spot the movie details), the 332nd flew bomber escort missions, acting as midair bodyguards for the white pilots on actual combat missions. When they were finally sent to fly on their own, they excelled. They shot down German jets and destroyed German trains, trucks, boats, barges, destroyers, and military factories. A couple hundred of the almost one-thousand of them didn’t survive the war. The unit was awarded a long list of Flying Crosses, Bronze Stars, and Purple Hearts. They were called “Red Tails” due to the distinctive crimson paint on the tail section of their planes.

Despite an interest in the great true story behind RED TAILS, I failed to see it when it was released theatrically. 2012 was a crowded time for movies, and this particular movie arrived to positively toxic word of mouth. I still wanted to see the movie, but after getting a sense of that critical vitriol, I didn’t rush. Now, if you watch RED TAILS and then poke around online for reviews afterwards, you will see something very clearly: The movie is not jump-out-of-your-seat-and-tell-everybody great, but nor is it remotely as bad as its reviews, which are generally venomous and nasty.

The reason is that most reviewers didn’t review the movie RED TAILS. They reviewed its producer, George Lucas. I’m sure I have been guilty in the past of looking beyond a movie to write about other things besides the actual movie in front of me, so I can’t condemn the practice, but it was a widespread and noticeable mania in this case. RED TAILS is the passion project of George Lucas, who talked for years in interviews of getting it made. His reasons are his reasons. Maybe his reasons are only that it’s a great story. That didn’t matter to most critics. They wanted to write about STAR WARS.

Older critics blame George Lucas’ STAR WARS and Steven Spielberg’s JAWS for the glut of offal that followed, the thirty years of summertime blockbuster bombast made by less-talented fans and craven capitalists. Younger critics, particularly those hailing from my generation, feel burned by George Lucas. He made some movies when we were young that we loved (three STAR WARS‘s and three INDIANA JONES‘s), and then he made some follow-ups (three more STAR WARS‘s and one more INDIANA JONES) that we did not love.

That we kind of hated.

“The new STAR WARS movies suck,” most of us have said. “George Lucas ruined my childhood,” the drama queens among us have said.

Now, as for me, I haven’t gone back to revisit the newer STAR WARS movies since I first saw them, but nor have I gone back to the originals in over a decade. George Lucas didn’t ruin my childhood. He made some super-imaginative movies that I loved as a kid, but which, as a result of my changing tastes, I haven’t felt a need to obsessively revisit, the way many of my peer group do. Apparently I’m coming at this from a slightly different place than many people my age. Ain’t no grudge being born on these shoulders. I’m not going to hold STAR WARS against RED TAILS. 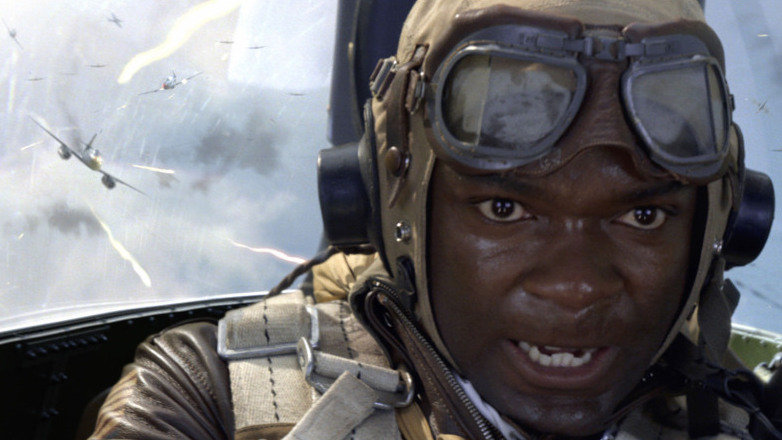 Also, George Lucas didn’t direct RED TAILS. But here’s what he did do:

Now, those are only the facts, son. I’m hardly a George Lucas apologist. I like good movies as much as you do. And so I’m not able to argue that the finished product can stand shoulder-to-shoulder with the very best World War II filmmaking, not even alongside those made by Lucas’s pal Spielberg. RED TAILS isn’t as viscerally involving as SAVING PRIVATE RYAN and it isn’t as layered or affecting as BAND OF BROTHERS. (On the plus side, no creepy old guy framing sequence, and no Jimmy Fallon.)

But yes, RED TAILS is somewhat superficial, leaning back on firmly-established cliches when you’d like to see some real fire, some rage. I mean, these guys are fighting the Nazis. I’m the guy who thinks INGLOURIOUS BASTERDS didn’t go far enough. Judge me however you see fit, but: It’s as satisfying for me to watch black guys shooting down Nazis as it is to watch Jews doing the same. I love watching Nazis get killed onscreen. It’s one of the best things about movies.

The violence in this movie is somewhat sanitized, certainly removed, not impassioned. Maybe that’s more healthy, but it’s also the less bloody, less emotionally-invested approach — with all the work I did to back away from STAR WARS earlier, it’s still a fair comparison to liken the best moments of RED TAILS to the part of RETURN OF THE JEDI where Lando Calrissian blows up the Death Star.

Still, is that the worst thing? RED TAILS is all broad strokes. It’s corny. It has some very likable actors saying some very purple dialogue that isn’t eminently quotable on its own. It’s got some cheesy romance. It’s got real production value in the sets and in the costuming. It has state-of-the-art effects, its dogfight scenes being its most tangible and thrilling moments by a wide margin. Its score is all pomp and circumstance, and yet it’s emotionally stirring all the same. 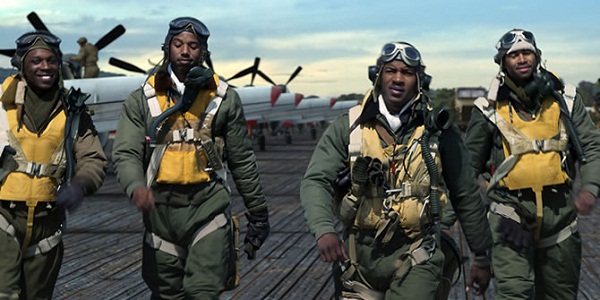 Here’s a question: Don’t little black kids have the same right to have a STAR WARS that little white kids do? (Yes, certainly. I will literally fight you if you disagree.) Following that: Isn’t it a decent thing that George Lucas at least tried to get one made for them? (Yes, almost as certainly.)

RED TAILS isn’t a great movie. You can find a more detailed accounting of why that is in the reviews by Wesley Morris and the late Roger Ebert. They give you the honest take-away. RED TAILS is most enjoyable when it’s about the planes, not the people. And that’s a let-down. This story deserves to be made into a great movie. Still, it’s hardly awful or a waste of your time. It isn’t an embarassment. It’s way, way better than all three prequels. It’s a diverting rendition of an important story that deserves telling, on the widest screen possible. Lee Archer should be way more famous than either Yoda or Boba Fett. If watching RED TAILS makes little kids — black or white — look up his name, it’s a success for that alone. 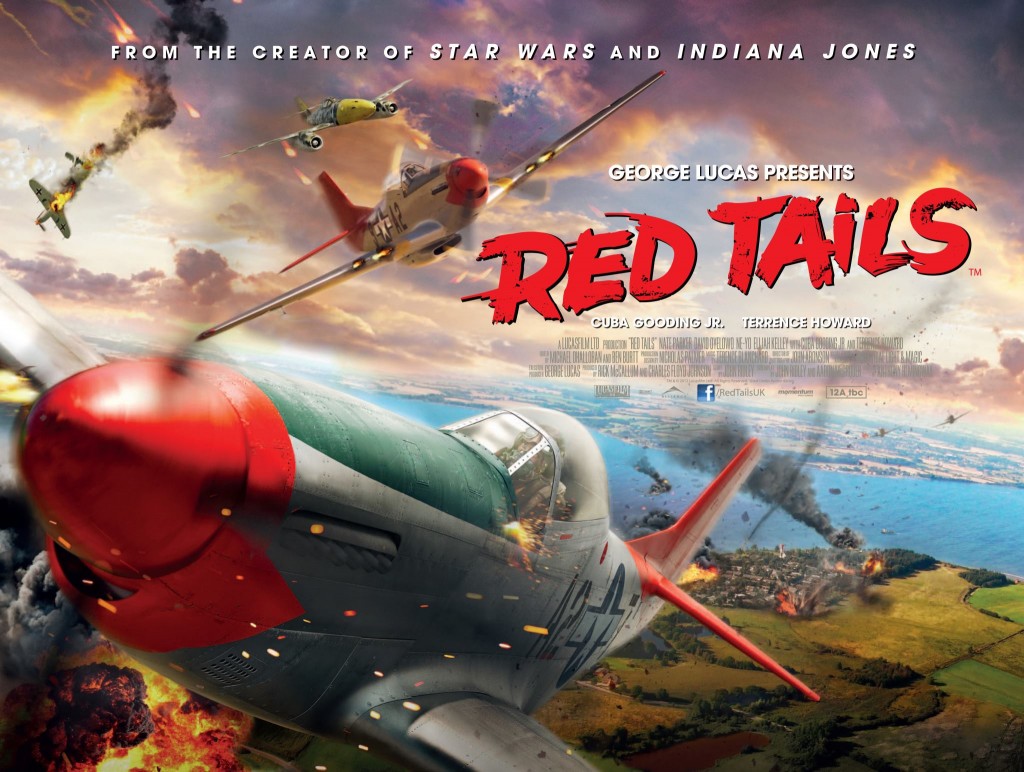