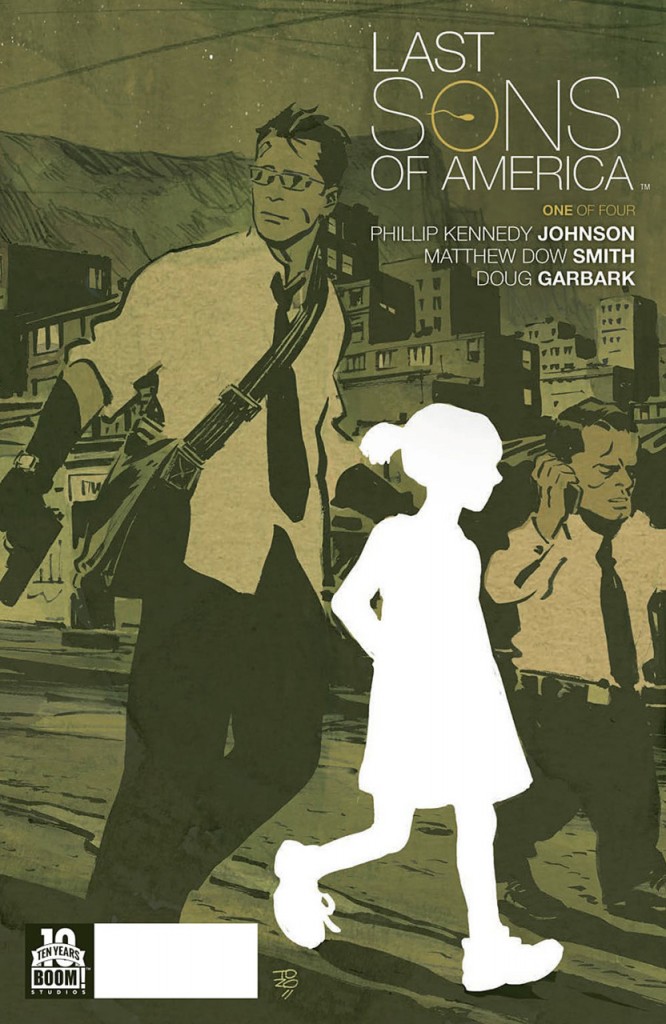 Welcome to the not-so-distant future, where a biological attack has rendered the entire American population, both male and female, incapable of having children. Sounds like the invitation to start a 40-or 50-year party to me, but let’s face it — in a nation where siring offspring is seen by most as some sort of God-given right, it wouldn’t take long for the entire population to have a massive freak-out. And to start looking elsewhere for little angels to call their own —

So goes the intriguing premise behind newcomer (at least to my knowledge) writer Phillip Kennedy Johnson and artist Matthew Dow Smith’s new four-part Boom! Studios mini-series, Last Sons Of America, and while there’s definitely a distinct CHILDREN OF MEN influence on the proceedings here, the idea that the “sterility plague” in this book is only affecting one country — and that said country just so happens to be the most powerful one on Earth — definitely alters the “no future for us, I guess” framework for the (in my view, at any rate) better, by opening up rather obvious possibilities for commentary on imperialism and the like. After all, it was bad enough when we just wanted your oil, but when we start coming for your kids, too, well — all bets are off. 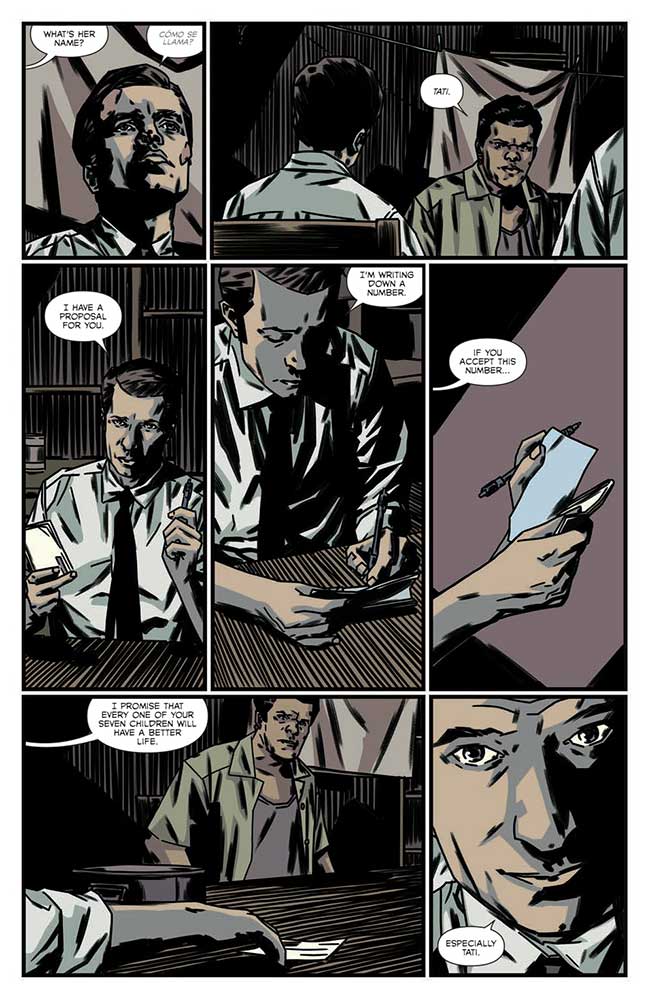 Enter brothers Jackie (the ethically challenged one) and Julian (the one with at least some conscience remaining), two guys employed in the booming “adoption” business who have traveled to a particularly impoverished region of Nicaragua (the only factory in town having just shuttered) in order to “offer” dirt-poor parents the “chance” to “give” their children a “better” life by selling them off to well-to-do American couples desperate to hear the patter of tiny feet in their homes. Our pair of protagonists are essentially brokers or middle-men in this perverse economic equation, but when their latest “extraction” (that’s it for the scare-quotes, I promise) goes south, Jackie decides to resort to more direct means for obtaining his flesh-and-blood wares. Folks in his line of work, of course, are able to justify this sort of off-the-books appropriation as rescuing youngsters from a life of poverty and hardship (even if they don’t bother getting the kids’ — or their parents’ — consent), but you and I have no need for such pleasantries and can still call kidnapping exactly what it is.

There’s just one problem with Julian’s brilliant idea, though — he’s unknowingly snatched the last child in town that any person who went in with an actual plan would have, and now both brothers are well and truly fucked. 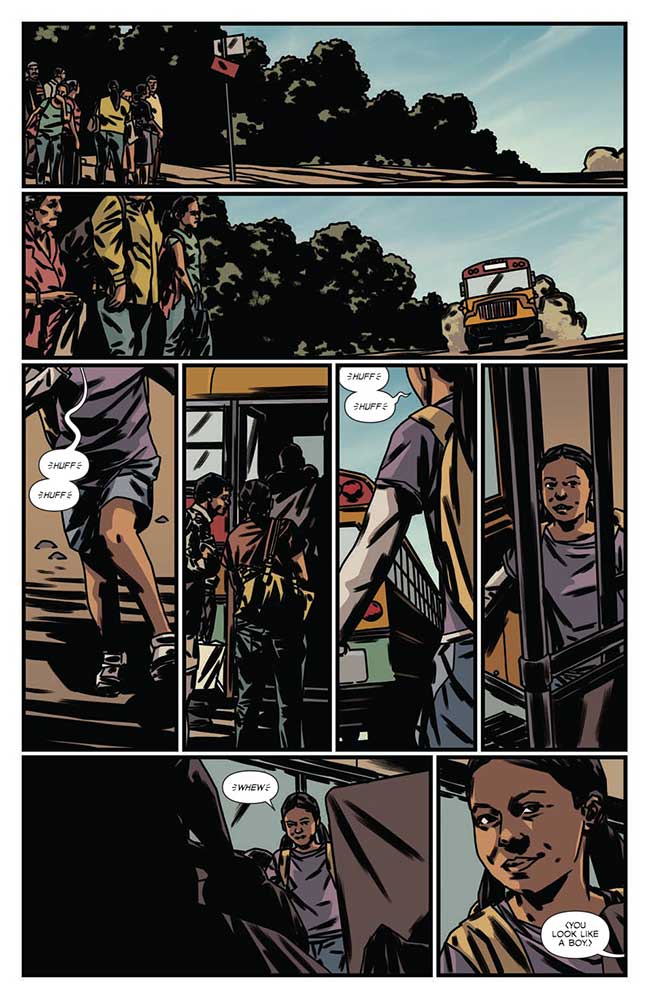 The term “world-building” is a highly overused one in our media-saturated culture, but Johnson does a bang-up job of it here and sets the stage for what promises to be a highly immersive, if decidedly queasy at times, read. We get a solid handle on our main characters quickly, the desperation on the locale they’ve descended upon is palpable, and we even manage to piece together a pretty workable outline as to on the operational set-up of the region’s socio-economic power structure, both above-board and otherwise. Deliver all of this to us by way of sharp, authentic dialogue that engages in only a minimal amount (really just a page or so) of “info-dumping,” (whoops, there goes my promise) , move events along at a brisk but far from overwhelming pace, and you’ve got a winner of a story on your hands.

Contrary to what some critics would have you believe, though, comics ain’t all about word bubbles and caption boxes, and Smith’s art might just be real star of the show here. It’s moody, atmospheric, and very pleasing to the eye indeed, and aided by the well-balanced colors of Doug Garbark, the overall aesthetic conveyed is a unique combination of stylish and grimy. You can feel the dirt from the Nicaraguan village getting right under your skin, but you’re not in any big hurry to wash it off. Wrap the package up with a suitably art deco-influenced cover by Tonci Zonjic and a really cool logo complete with an eager, squiggly little sperm, and the end result is a comic book with a singular — and successful — visual philosophy throughout. 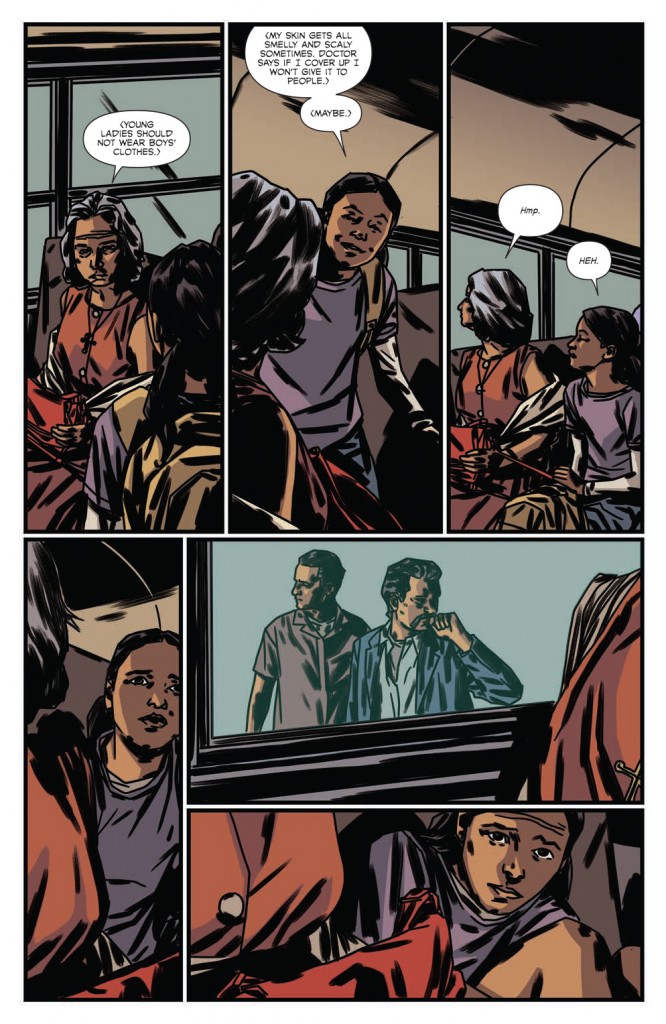 Chances are that your LCS went pretty light on their orders for this one, given that it comes to us via less-than-well-established creators working for an independent publisher (I think my store got six copies total), so you may want to make tracks over there and grab up this first issue while you still can — or have them order one up for you from Diamond if it’s already gone. There’s not any burning need to wait for the inevitable trade here, given that it’s just a four-parter, and picking it up in singles probably won’t cost you considerably more (if anything), either, so hey — if this sounds like your cup of tea, you may as well jump on board now.

I’m hesitant as hell to employ worn-out adages like “this is a book that deserves your support,” but damn if that’s not precisely the case. Last Sons Of America is flying distinctly beneath the majority of the comics-buying public’s radar screen, so if you do buy it and like it, do your part to spread the word — it would be nice to see these fresh, talented creators be able to pay their rent for at least a few months with income earned from this project, and to subsequently decide that comics is a business that they’d like to stick around in for the foreseeable future. 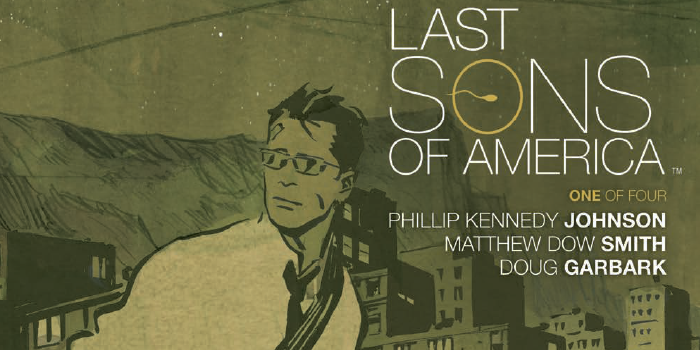