Despite having already played there, Astron-6’s outrageous, amazing exploitation comedy FATHER’S DAY has been essentially banned down under. The film was assessed as RC (refused classification), meaning it cannot legally be screened or distributed in Australia in its present form, despite the fact it was granted an exemption from classification earlier this year to allow it to screen in a horror festival in Sydney.

According to WAToday, “The agency assessed the film as belonging to a category of films that ‘depict, express or otherwise deal with matters of sex, drug misuse or addiction, crime, cruelty, violence or revolting or abhorrent phenomena in such a way that they offend against the standards of morality, decency and propriety generally accepted by reasonable adults to the extent that they should not be classified’.” 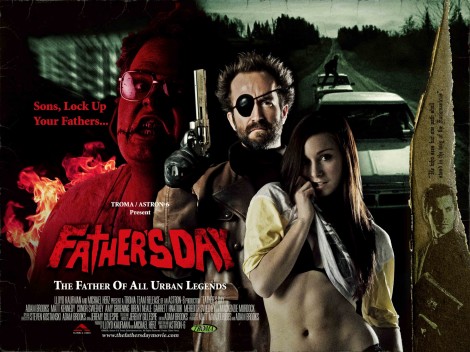 The plus side to all of this is that Astron-6 can now gloat about being “BANNED IN AUSTRALIA” on their cover boxes, which should be great for sales, and the more people that sit through this batshit dad-rapey, gore-filled masterwork, the better.