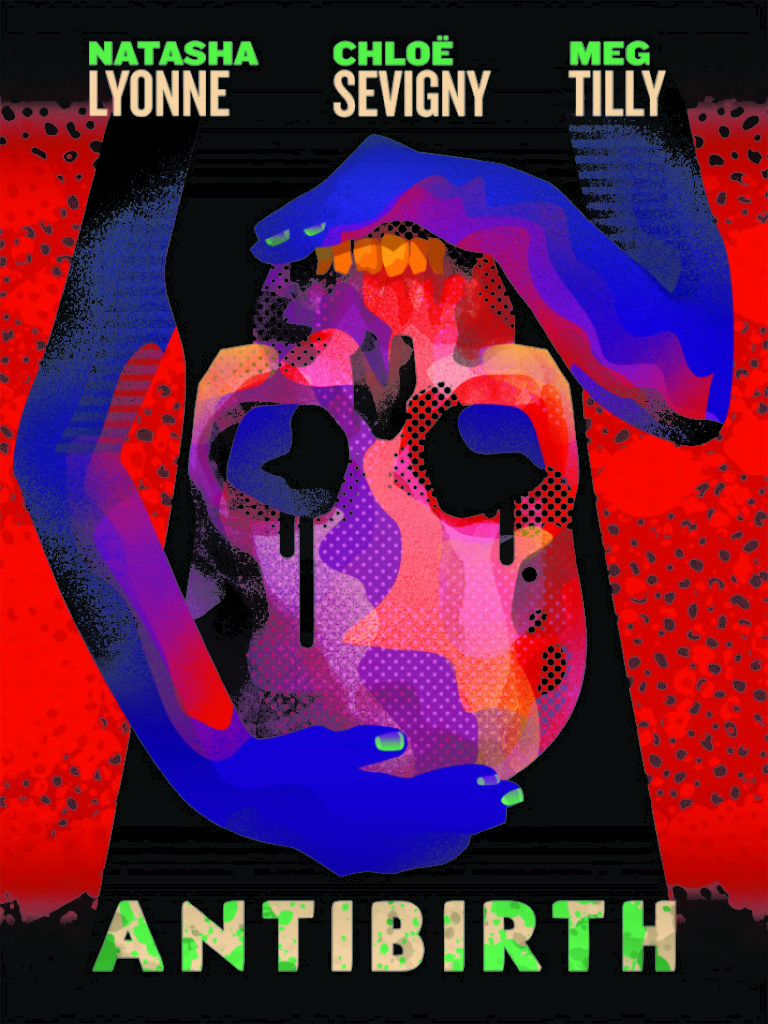 I am not going to pretend that ANTIBIRTH is a perfect movie. But I have a lot of affection for low-budget horror films that commit to their absurd premises and pull out all the stops in their efforts to shock or surprise. The debut feature by writer/director Danny Perez, ANTIBIRTH over-reaches at times and spins nearly out of control, but it is those excesses that make it an enjoyably bizarre, candy-colored trip through an otherwise hellish landscape.

Lou (Natasha Lyonne) is a walking bender. Almost never seen without a drink, a bong, or any variety pills in her hand, she spends more of her time in an altered state than anything resembling sobriety. Staggering through a small, economically depressed Michigan town (with northern Ontario filling in for Michigan) full of junkies, prostitutes, homeless people, and fellow hardcore partiers, she is thirty-something going on giving up on life. 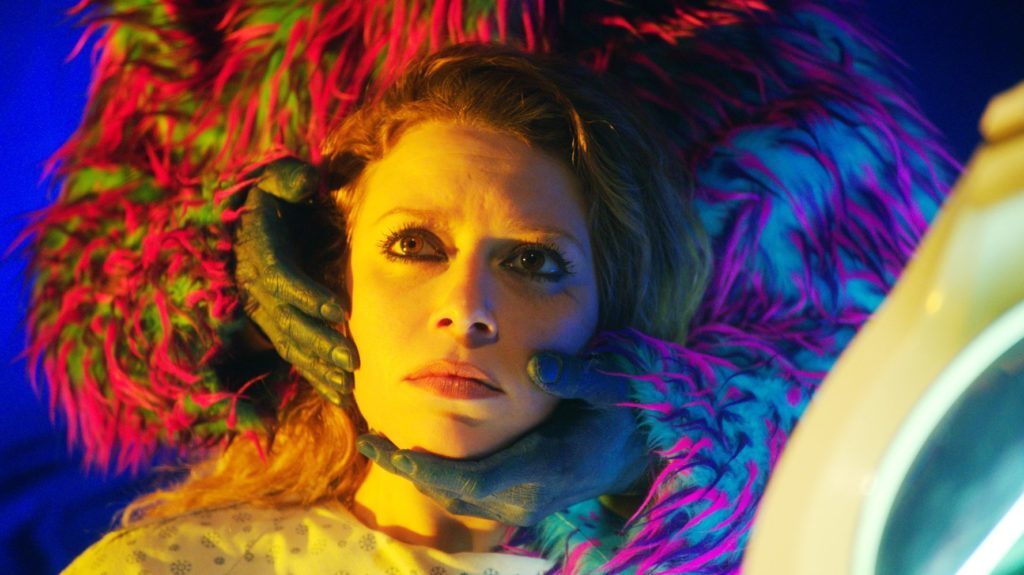 During a raucous party in an abandoned warehouse, Lou blacks out. She wakes up at home in her dilapidated trailer with her friend Sadie (Chloë Sevigny). Unable to remember what happened after the party or how she got home, Lou’s life turns even more depressing when she shows signs of being pregnant.

Her apparent pregnancy comes with several strange issues. The first — and most confusing — problem is that she has not had sex in six months. The second problem is how it progresses quickly over the course of a few days until she looks like she is at full term. The third problem is that her body responds to the pregnancy by causing side effects like molting skin, multi-colored pus, and loss of teeth. If you had not yet guessed it, ANTIBIRTH leans pretty heavily on body horror and gross out sequences.

While I would never call the film a gorefest, in many ways, it reminds me of a particular strain of ’80s horror comedies that found dark humor in seedy environments introduced to sinister forces. I found myself reminded of films like STREET TRASH and BRAIN DAMAGE, even though it is more polished than the former and less focused on drug addiction metaphors than the latter. What it does have in common is a real sense of place and an insular, self-destructive community that is as damaging to the characters as the supernatural menaces they face. 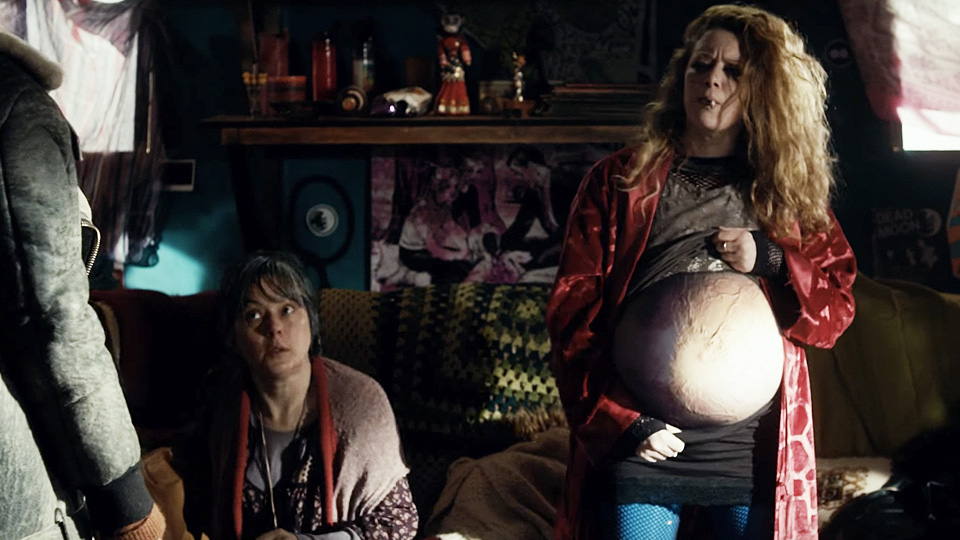 Lyonne anchors the film with a sarcastic performance that makes it easier than it should be to root for Lou. As an irresponsible party girl who flaunts her sense of entitlement to a life free from any consequences, Lou should not be a sympathetic character until forces converge unfairly on her. But Lyonne gives her a wry sense of self-deprecation that goes a long way to making her less a series of bad decisions and more a very damaged human being.

The script by Perez gives the impression that Lou became trapped at a young age by a series of circumstances beyond her control. Despite her constant attitude that she just cares about getting high and drunk, Lou shows just enough insight into her situation to betray an intelligence that is being wasted on her dead end existence. If Lyonne’s performance were not so consistently funny, ANTIBIRTH would probably be too depressing to watch.

Thankfully, despite the ugly look and feel of the film, Perez populates the margins with such bizarre characters, asides, and funny/gross body horror gags that it never tips over into nihilism. Just when things are getting a little too heavy, Perez will go to a scene of Meg Tilly as a spaced-out mystery woman who may or may not have rolled into town to help Lou, a disgusting bit with the lancing of a massive blister on the sole of a foot (complete with a disgusting close up of the pus being squeezed out), and a nightmarish commercial for a bowling alley that is reminiscent of something that would air on Adult Swim at 3:30 in the morning. 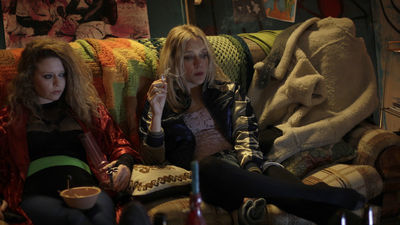 The tone does get a little jumbled at times. Perez has trouble going from the dark comedy and odd tragedy of Lou’s story to scenes with a brooding Mark Webber as a disgusting pimp/drug dealer. Sevigny is also left hanging out to dry as Sadie is forgotten for large sections of the film only to pop back up in unnatural ways that are jarring. The eventual reveal of what is happening to Lou is a little too convoluted of a conspiracy for such a slight film to ultimately support.

Even though the film threatens to fly off the rails at times, Perez eventually brings ANTIBIRTH around to a great ending full of gooey special effects and a bonkers final shot that I never would have guessed from the opening of the film. For once, a modern horror film left me wanting more rather than overstaying its welcome.

Although the Blu-ray is relatively barebones, Scream Factory has given a very crisp presentation to the film. The colorful lighting, neon-tinted bodily fluids, and grungy production design really pop. Extras include the trailer, storyboards of the film’s finale, and the full versions of the hallucinatory reality shows and commercials that haunt Lou’s dreams and hazily appear through the static of her TV. It would have been nice to get a commentary by Perez, but maybe it is better to let the film’s excesses and messiness exist without explanation. 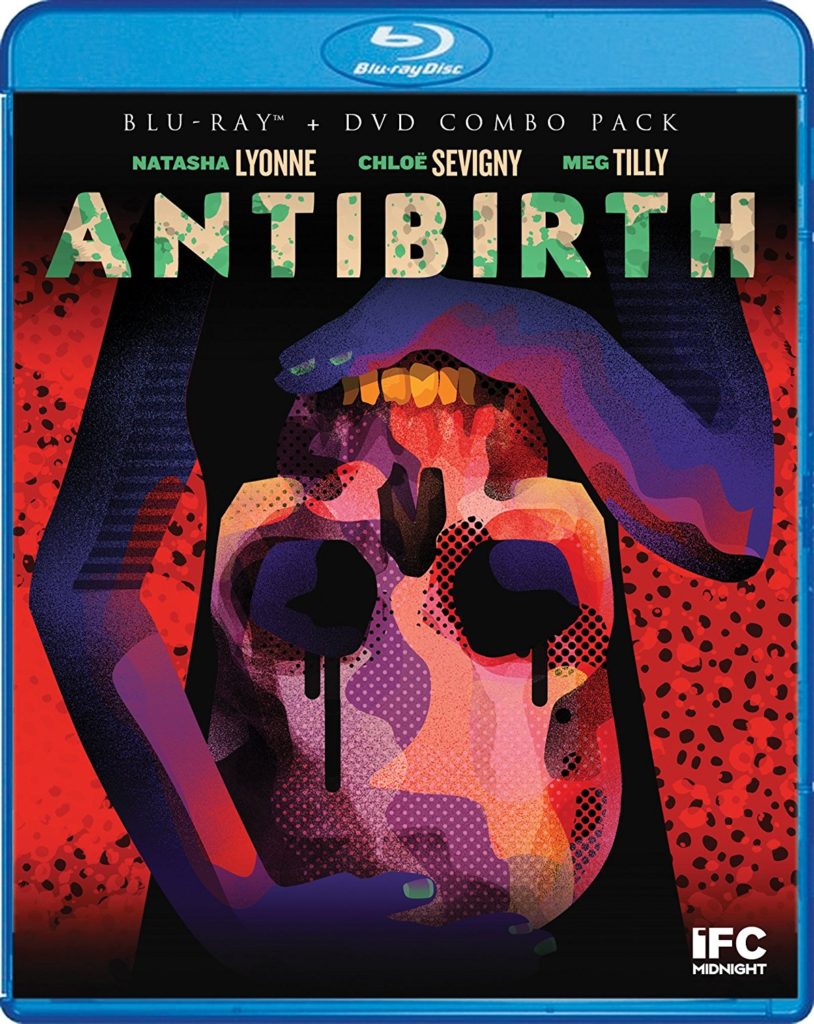 ANTIBIRTH is out on a Blu-ray/DVD combo pack from Scream Factory on Tuesday, February 7th. It is available to order on their website.