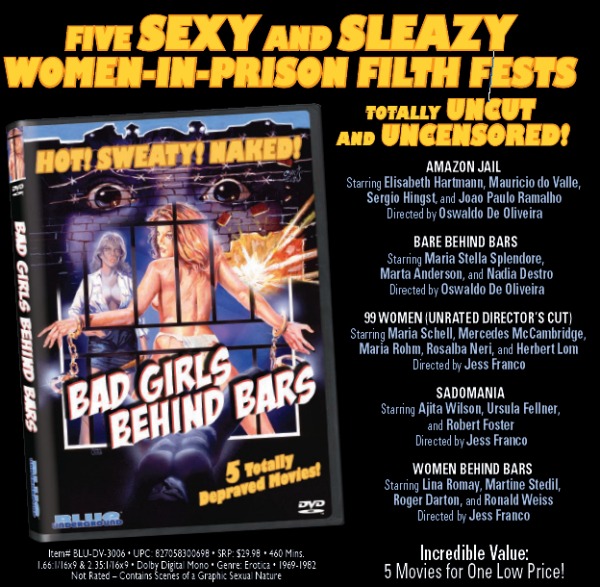 BARE BEHIND BARS:
In a women’s penitentiary where brutal beatings, steamy showers, and full cavity searches are the order of the day, the cons are turning into pros – and the cemetery is running out of room! To stay out of the torture chamber, the inmates can barter their bodies in the wicked warden’s white slave trade, or submit to the nympho nurse’s peculiar brand of medical malpractice. But when these lawless lovelies go on the lam to wreak vengeance on straight society, no one will be safe!

99 WOMEN:
For his epic shocker of caged women gone wild, legendary director Jess Franco (SUCCUBUS) brought together a once-in-a-lifetime cast of International beauties including Maria Schell (THE ODESSA FILE), Luciana Paluzzi (THUNDERBALL), Rosalba Neri (LADY FRANKENSTEIN) and Maria Rohm (VENUS IN FURS). Mercedes McCambridge (JOHNNY GUITAR) and Herbert Lom (MARK OF THE DEVIL) co-star as the sadistic wardens of an island prison where abused yet luscious young lovelies surrender to their own depraved desires. Behind bars…without men…experience the unchained passion of 99 WOMEN!

SADOMANIA:
In all the annals of exploitation cinema, there has never been anything quite like it: Take a luscious young bride (beautiful Playboy centerfold Ursula Fellner) thrust into a brutal prison camp run by a sadistic woman warden (the stunning transsexual adult film star Ajita Wilson). Add generous helpings of lesbian lust, bestial perversion and some very extreme violence. Then mix in a jaw-dropping performance by the film’s controversial director as a degenerate white slaver. Do you dare take a forbidden taste of the wildest women-in-prison movie ever made?

WOMEN BEHIND BARS:
When a brazen diamond heist on a Chinese junk ends in a bloody double-cross, the traitor escapes only to be mysteriously murdered by his mistress. The vicious vixen is locked away in a tropical prison where, to keep the hidden jewels for herself, she’ll have to resist the charms of the warden’s Sapphic spies; withstand whips, chains, and high-voltage electrodes in his dungeon; and, if she breaks free, she must pass through the gauntlet of greedy gangsters working on both sides of the law. Are her mind and body strong enough to survive the agonies and ecstasies of life in the big doll house?