Who can possibly resist a movie with the advertising tag-line “After the oil wars — out of the rubble of the cities comes — Battletruck!” Shit, I know I can’t, which probably says a lot about me — first and foremost being that some serious therapy is needed right away. But if you’re equally in need of professional therapeutic help, then Roger Corman’s 1982 post-apocalyptic cheapie BATTLETRUCK (also released under the title WARLORDS OF THE TWENTY-FIRST CENTURY) is going to be right up your alley.

We’ve surveyed some of the low-budget post-apocalyptic flicks that sprung up in the wake of THE ROAD WARRIOR here at DG this week, sure, but one of the things that sets BATTLETRUCK apart from the Italian and Filipino-produced (for the most part) films that came to populate the bulk of this genre is the fact that it’s not actually a knock-off, given that first-time director Harley Cokliss (who now pronounces and spells his name Cokeliss — I think you’d do the same) who had pitched his idea to “King of the Bs” Roger Corman as a young, fresh-faced filmmaker just off doing some second-unit work for George Lucas on THE EMPIRE STRIKES BACK, was that it was actually shot in New Zealand at roughly the same time that George Miller was making what was then known as MAD MAX 2 over in Australia, and made its debut in theaters two weeks earlier than its more-famous counterpart in 1982. In addition, it’s based on a novel by Margaret Abrams that had come out some years previously, so rather than being a ROAD WARRIOR rip-off, this is more like its forgotten twin brother.

There are other factors that set it apart from (and, frankly, above)  the rest of the films that followed in its wake, as well — for one, the south island New Zealand filming locations are gorgeous, yet presented in a suitably drab “after-the-fall-of-civilization” style. Trust me, that takes some talent. I’ve spent plenty of time down on the south island of New Zealand and its one of the most breathtakingly beautiful spots on the planet.  It would be the absolute last place I’d choose to set a movie that takes place after the apocalypse, but Cokliss makes it work.

Also working in BATTLETRUCK‘s favor is the fact that, for the most part, the production values on display here are — dare I say it? — good, with the ramshackle tin-hut communes, dilapidated vehicles, ragged homemade clothes, and other accoutrements we’ve come to expect in movies that take place after the shit’s hit the fan appearing very authentic indeed. There’s a reason stories in this genre were so appealing to producers of low-budget cinema — a future society that looks like shit is a pretty easy thing to get looking right without shelling out too much cash. 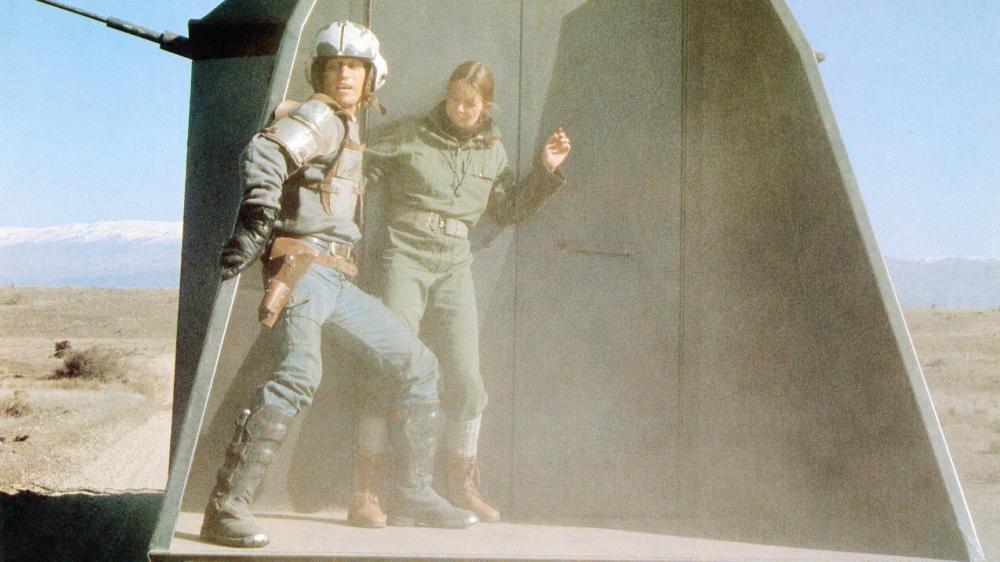 And speaking of production values, the mighty Battletruck itself is a damn impressive piece of work. A fully-functioning, armor-plated 18-wheeler constructed over the skeleton of a Canadian logging rig, it’s an early progenitor of other bad-ass movie behemoths like “Dead Reckoning” from George Romero’s LAND OF THE DEAD and cuts a truly imposing figure on the landscape, as you can clearly see —

Now, to be sure, BATTLETRUCK has some solid strikes against it, as well. For one thing, the story’s not especially original. A bad-ass warlord named Col. Straker (James Wainwright) leads a bloodthirsty band of marauders around in his super-vehicle looking to rip off all the fuel and food and women they can find in the post-oil-war wasteland. Gasoline is the most valuable commodity in the world, and the Battletruck doesn’t even come close to meeting EPA standards, which aren’t enforced anymore since there’s no government left (although filmed in New Zealand, the movie is obviously supposed to be taking place in what used to be the USA).  When his pretty twenty-something daughter Corlie (Annie McEnroe) refuses to kill a guy on her old man’s orders, she goes on the run and ends up finding temporary refuge with the hero of the story, a solitary motorcycle-riding man of few words who lives on a mountaintop named Hunter ( played by Michael Beck — ever notice how all the guys in these movies have names like Hunter, Straker, Stryker, or Slade?).  Hunter lives by own code and, while he can (of course) fight with the best of them, if left to his own devices all he really wants  to do is make his way as peacefully as possible through life in a violent world. He’s got a heart of gold under that somber exterior, though, and he can’t refuse a damsel in distress, or leave a wrong un-righted.

He takes her to his friend, scrap-heap mechanic/amateur scientific whiz Rusty (John Ratzenberger, best known as Cliff Clavin  from Cheers), who lives in one of the makeshift communal camps that have sprung up in the wake of collapse of the world economy, and despite being the daughter of the evil dude everyone’s scared of, they vote to take her in (everything’s decided democratically, just like in the old hippie communes). Her brief respite is shattered, though, when her dad and his gang show up in the titular Battletruck, trash the place, take her back, and steal all the gas in sight. 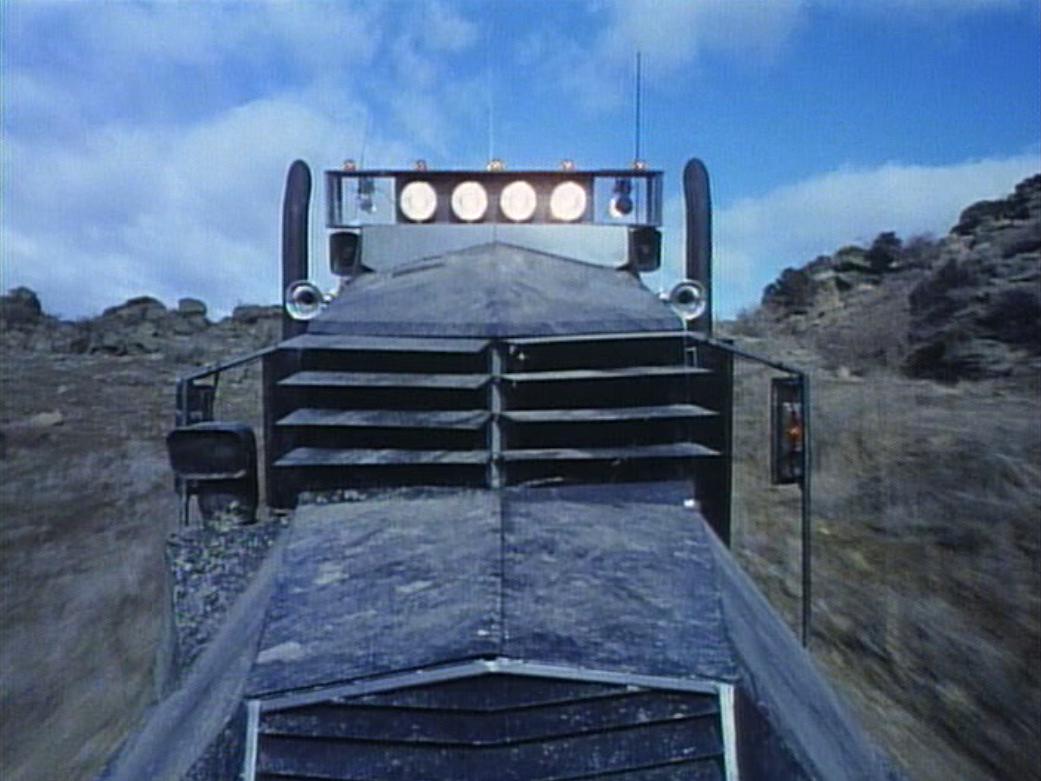 Then — stop me if you’ve heard this one before — it’s up to Hunter to come down from the mountaintop, assemble the ragtag survivors into a deadly and heavily-armed fighting force, get the girl back, and stop Col. Straker once and for all.

So, yeah, nothing terribly original going on there, but you have to hand it to Cokliss and screenwriter Irving Austin — the characters and society they craft are believable, the dialogue never gets too hokey, and the vehicular mayhem that makes up a good chunk of the last third or so of the film is sufficiently exciting, impressive, well-executed, and well-staged. In a movie like this, you’re not looking for them to do anything new so much as to do what’s done before and hopefully do it right, and BATTLETRUCK gets all the basic elements very right indeed.

The only other major knock on the film in this reviewer’s opinion is some of the acting. Wainwright is never particularly menacing as Col. Straker, going for more of the flat-and-monotonous approach rather than reeking of pure evil, and Beck as Hunter is equally, at least, uninspired as the hero of the piece. Being a solitary and reluctant warrior is one thing, but this dude’s got all the screen presence and charisma of a soggy three-day-old cardboard pizza box that’s been left out in the rain. Still, there’s enough going on here that’s done well for this flick to transcend both its budgetary limitations and two listless lead performances.  It’s not exactly authentic but it is reasonably interesting, beautifully shot, has a solid script that moves along at a good pace, and it packs a solid whallop in the action department. If you’re looking for some cheesy post-apocalyptic fun, you could do a hell of a lot worse than BATTLETRUCK. If you’re so inclined, BATTLETRUCK is available on DVD from Shout! Factory as part of their “Roger Corman’s Cult Classics” series. It’s paired as a double feature with DEATHSPORT, a pretty lame attempt on Corman’s part to recapture the winning formula of one of his earlier efforts,  DEATH RACE 2000 (it even stars David Carradine) that fails on pretty much every level — it’s still worth watching at least once, though, if you’re a B-movie aficionado. Both films are presented in pretty basic 2.0 stereo mixes, which is just fine for BATTLETRUCK, where everything is crisp and clear, but a little less successful in the case of DEATHSPORT, which is a mess in the audio department. DEATHSPORT is presented in an anamorphic widescreen transfer, and BATTLETRUCK is presented in its intended full-frame aspect ratio. Both prints have been remastered, but BATTLETRUCK looks a hell of a lot better since it was struck from a good-looking answer print while DEATHSPORT had to be stitched together from an edited TV version and excised scraps from a theatrical print, and the contrast is often jarringly obvious. As far as extras go, both feature terrific commentary tracks, especially in the case of BATTLETRUCK, which takes the form of a Q&A session between director Cokliss/Cokeliss and moderator Jonathan Rigby. The disc retails for under ten bucks at most online merchants and makes a solid addition to your cult movie library.