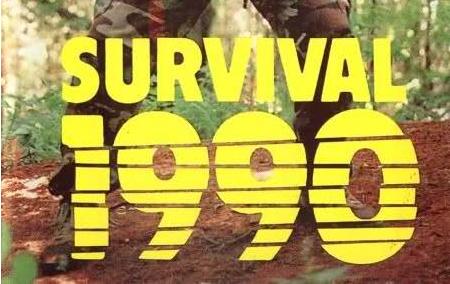 The other day, a kind-hearted reader (who, by the way, has my eternal thanks) dropped in my email inbox a video “rip” of a Canadian post-apocalyptic shot-on-video obscurity from 1985 called SURVIVAL 1990, alternately known as SURVIVAL EARTH, along with an a one-line email that simply read “This you’ve got to see.”

How right he was, friends,  how right he was. Details on this flick’s production are scant, but here’s what I’ve been able to come up with following about an hour of legwork on the internet: It was financed by an outfit called Emmeritus Productions, the brainchild of Hamilton, Ontario local TV presenter Lionel Shenken, was shown once on (non-CBC) Canadian television, and recouped its (infinitesimal, I assure you) production costs in advance by dint of Shenkel having an international VHS distro deal in place before shooting even began. Apparently it never made it onto home video here in the US, and barely got much of an outing on its home soil (that aforementioned distro deal obviously wasn’t so great), with the end result being that what few people have seen it probably caught it via its European issuing on short-lived British label Visual Entertainment. 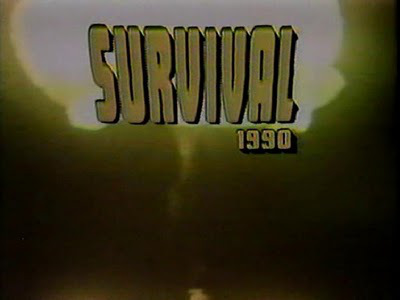 How badly does it suck? Let us count the ways : even though it’s got “1990” in the title, the movie actually takes place in 1996; despite the fact that stock footage of an atomic explosion plays at the beginning, we’re told about an hour in that the “end of the world” was actually brought on by an economic collapse that forced “the army” (which army, precisely, they never tell us) to disband; a group of marauding forest-dwellers called “vandals” are, we’re informed, devolving back into animals (apparently the radiation from a financial meltdown can have that sort of effect); the flick’s “mutants” aren’t actually mutants at all, just people with no memory of what life used to be like before the shit hit the fan — the list is, literally, endless.

Our principal players in this harrowing tale of survival in a world gone mad are John (Jeff Holec) a former high school teacher, and his “mutant” (as in amnesiac) girlfriend, Miranda (Nancy Cser), who are joined in their forest shelter (in reality a crumbling set of three partial walls with no fucking roof) by Simon (Craig Williams), a former army dude who ingratiates himself to his new hosts by — no, I’m not kidding — killing their pet dog and serving it up for dinner.

Anyway, there’s apparently more to John than meets the eye — his dad is a research scientist who has a plan to save humanity through cloning, but don’t worry : that’s just dropped in about halfway into the 80-minute “story” here and never really picked up on. Kinda like the talk about cannibals having taken over all the major cities. Director Peter McCubbin and his co-screenwriters (Gina Mandelli and a double-duty-pulling Williams) have a real fondness for throwing out little tidbits of information that have no actual bearing on the proceedings whatsoever. 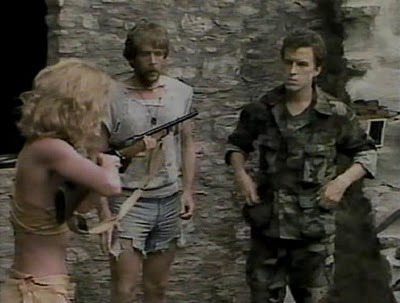 And that’s probably a good thing, since the proceedings themselves are pretty half-assed. McCubbin stages the occasional limp fist-fight and “action” sequence involving our “heroes” in battle with the vandals (one of whom, as you’ll see below, looks a bit like Charlie Manson with a weight problem, complete with carved forehead and everything) — oh, and I guess there’s a grenade explosion or two thrown into the works — but by and large SURVIVAL 1990 is composed of one interminable conversation with no real point to it after another. I swear to God, there’s more happening on your average Seinfeld episode, and we all know that was a show about, in its own words, nothing at all. This is just nothing at all after the end of the world — and we don’t even get a consistent explanation about how the world ended. 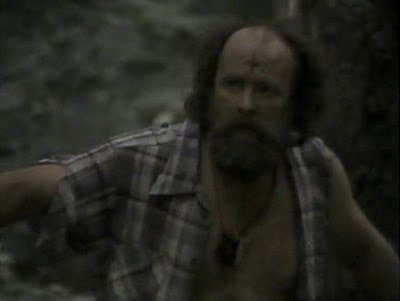 If you’re one of those folks who thinks a little bit of T and A can solve any problem, you’ll be glad to know that Miranda engages in a brief bit of skinny-dipping (evidently you can show a bit more on Canadian TV than you can here in the US), but honestly, it’s  no more enticing than anything else on offer here. It seems McCubbin suffers from a very acute case of being violently allergic to anything interesting.

All of which makes SURVIVAL 1990 quite possibly the most pointless thing ever committed to videotape, and probably worth seeing for that reason alone. I mean, this kind of utter utter nothingness doesn’t just happen by accident, right? Somewhere along the line some real skill had to be involved. It takes a special kind of creativity to come up with anything this aggressively absent of merit — I think.

Or I don’t. Or — shit, I dunno. You’re probably — okay, certainly — better off if you never see this thing. Any activity you care to mention is a more productive use of 80 minutes of your life than watching SURVIVAL 1990. Go watch the flagpole rust. Go watch your toenails grow. It doesn’t matter. This is the biggest waste of time ever. Period. Without exception.

I, of course,  plan on watching it again later tonight. But you knew that already, didn’t you?