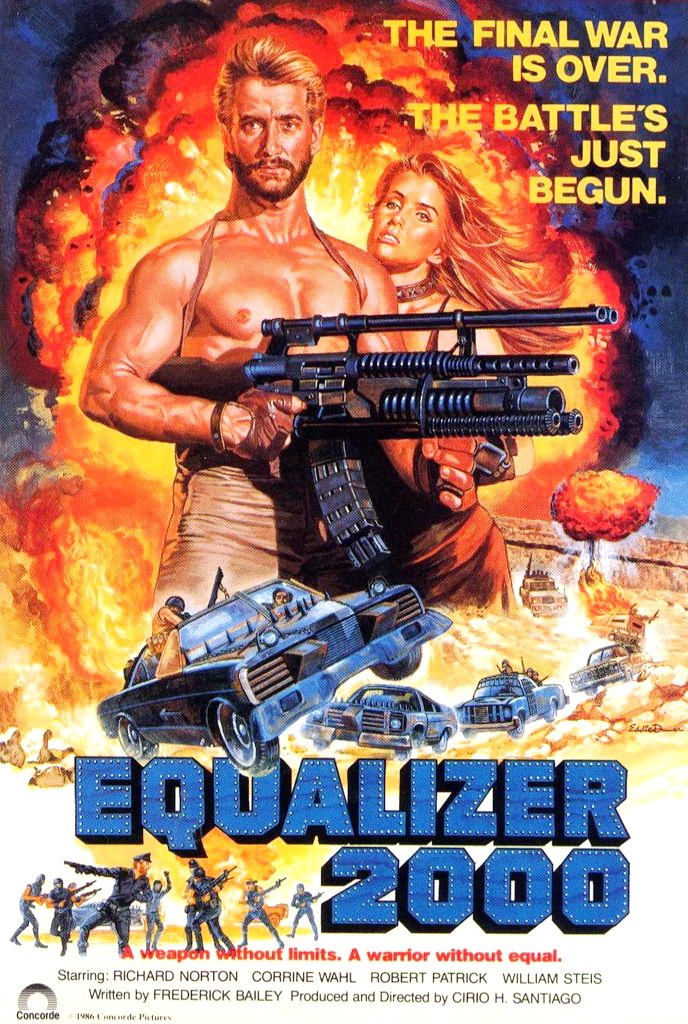 Let’s be honest — it really does take a certain amount of dedication to make it through normally-reliable veteran Filipino  exploitation auteur Cirio H. Santiago’s 1987 snooze-fest EQUALIZER 2000. All I can say is — thank God for Corinne Wahl. 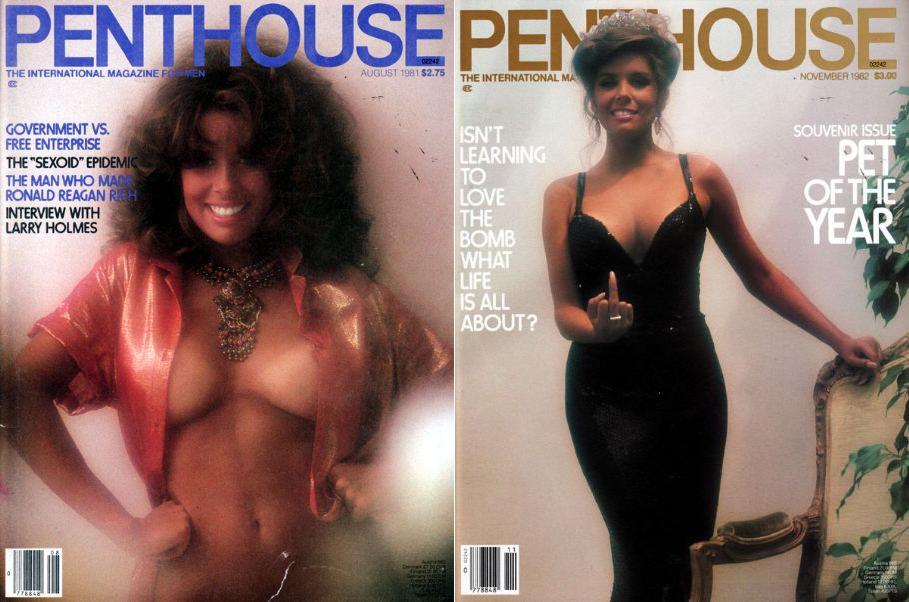 If you’re unfamiliar with the luscious Ms. Wahl (shame on you!), she was a two-time Penthouse “Pet of the Month” back in the early 1980s,  was voted “Pet of the Year” in 1982,  was married to former Wiseguy star Ken Wahl before he hooked up with one of the Barbi Twins (remember them?), gave acting a try there for awhile, and now works with her sister as a tarot card reader to the stars. She spends a goodly amount of time in this flick running around in skimpy, tight-fitting leather bondage-ish gear (or less), and gets to do things like point a big ol’ gun at a group of standard-issue post-nuke ruffians and exclaim “I’d love to blow you all right now!” What’s not to love, I ask you? 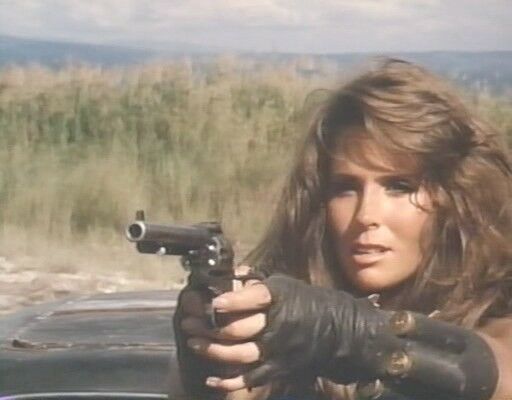 Well, quite a lot as it turns out, because unfortunately the list of EQUALIZER 2000‘s relative “merits” begins and ends right there. The plot here is your usual insipid, by-the-numbers stuff — after the requisite “nuclear winter” we were all scared shitless of when I was a kid, Alaska (by way of the Philippines) has become a scorching, irradiated desert wasteland lorded over by an outfit of elitist pigs called “The Ownership,” who horde all the oil that’s left in the world (a “world,” we’re told, with “no vegetation,” even though plants are clearly visible in a couple of scenes — whoops!) and protect themselves from the disorganized rabble who semi-populate the wastelands via the services of their paid mercenary biker forces. 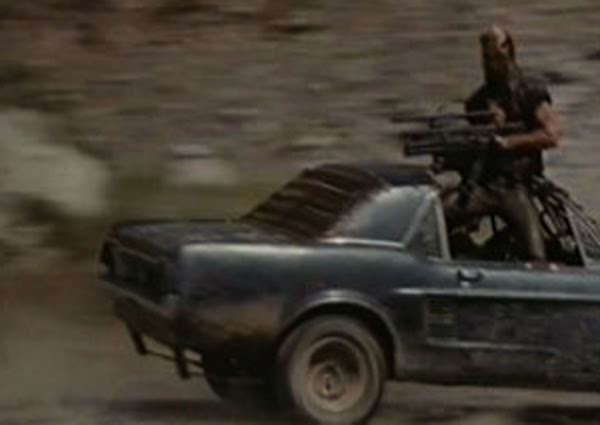 After “The Ownership” makes the mistake of killing his father, our tale’s ostensible “hero,” a mercenary named Slade (Richard Norton, who had a decent career in Hong Kong martial arts flicks but who gets a chance to display exactly zero of his skills here and instead spends the entire film doing his best imitation of a rock), tells his employers to take their job and shove it and splits to join one of the disparate, nomadic bands of rebels he used to fight and kill for a living. In between blowing shit up for reasons usually not adequately explained and impressing the lovely young Karen (Wahl) with his stoic non-personality, he’s also working on a bad-ass super-gun called, yup, the Equalizer 2000, which he’s gonna use to bring the whole “Ownership” down. 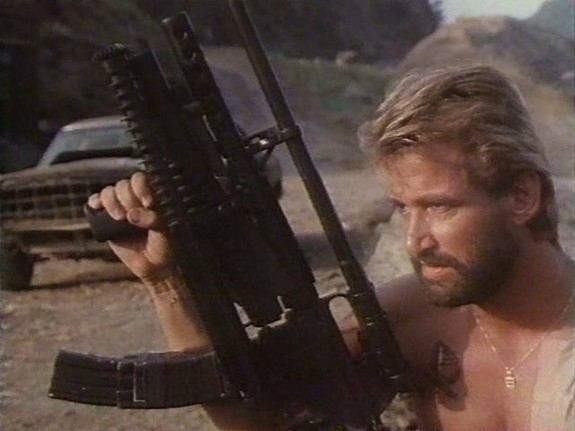 I won’t kid you, folks — even by the admittedly meager standards of the post-apocalyptic genre, this is pretty bare-bones stuff. To the extent that there’s even a coherent “plot” here at all, the script diverges from it constantly to indulge in one pointless, listless “action” sequence after another, and Santiago is quite clearly “mailing it in,” as the saying goes.  It’s hard to believe this is the same guy who gave us TNT JACKSON — hell, even the one other post-nuke flick on his lengthy resume, the third(-at best)-rate STRYKER, has more going for it than this poorly-thought-through, lackadaisically-directed mess.

All that being said, if pretty much any flick with souped-up, junked-out muscle cars chasing around after souped-up, junked-out motorcycles that throws in some good-looking ladies and an explosion or two here and there can keep you entertained for all of about 80 minutes then EQUALIZER 2000 will, I suppose, get the the job done — but even then only just barely. I caught this flick online, via a website which shall remain nameless (it’s not out on DVD, even though it got stateside distribution under the auspices of Roger Corman’s Concorde/New Horizons, but it’s pretty easy to find online, at least in 10-minute chunks — there’s a big hint) and have to admit that when Wahl wasn’t onscreen, my eyelids started to feel pretty heavy pretty fast. Oh, sure, there’s a “hey! How ’bout that!” moment when a young(-ish) Robert Patrick turns up turns up as a  generally amoral gun runner named Deke, but beyond that and Ms. Corrine’s leather ensembles, there’s not much to be on the lookout for here. 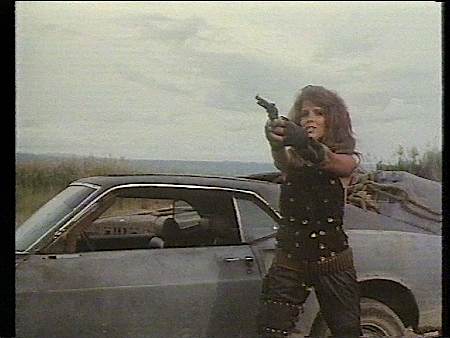 I guess, at the end of the day, the sad truth is that even if you go into this thing with appropriately low expectations, EQUALIZER 2000 will have a pretty hard time meeting them — and it doesn’t even feel like Santiago is really trying to. 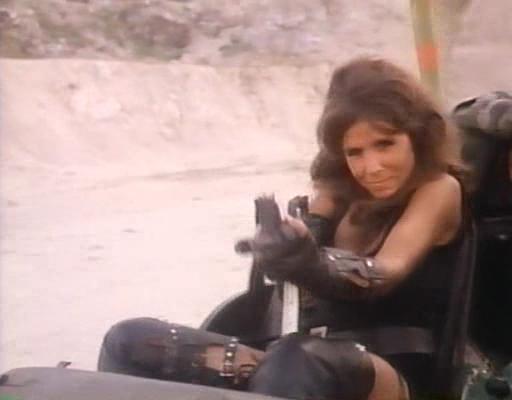 Weird as it may sound — or not — the best thing this movie could have done was be even worse than it actually is. It goes without saying that it was sure as hell never going to be good, but at least then it might have veered into the old “so-bad-it’s-good” territory that we all love around these parts. Still,  that usually requires a unique combination of inspiration matched with absolute inability, and this is a film that’s blessed with/suffers from neither — the script and acting are clearly, painfully uninspired, and Santiago is a perfectly capable director who just isn’t showing it here. The end result? A movie that features Corinne Wahl running around in just about nothing yet still manages to be achingly, crushingly dull. I guess that’s a semi-remarkable achievement of some sort, but it’s not one I care to witness again.