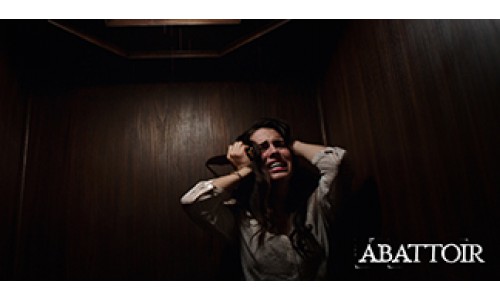 Following the brutal and seemingly unmotivated murder of her sister’s family, aspiring crime reporter Julia (Jessica Lowndes) returns to their home to find the room where the murders took place has been literally ripped out of the house. With reluctant assistance from her occasional lover, detective Grady (Joe Anderson), she starts to dig and uncovers a series of similar events spanning decades. Determined to discover the truth, she follows her leads to an isolated town where the dense forests hide a horrible secret. ABATTOIR is a strange beast, starting off looking like a period noir until the first computer screen shows up. Julia and Grady don’t have dialogue so much as they have snappy banter, and they dress the parts, too. The first hour or so of the film is elaborate setup for its jaw-dropping final act. This is Bousman’s best film since SAW II, a unique and ambitious mystery/horror with style and personality to spare.

Darren Lyn Bousman was in attendance for the BCHFF screening, and claimed during the Q&A after the film that the film was originally envisioned as a part of a larger story covering a limited TV series, a graphic novel, and this film. He also claimed that his first cut of ABATTOIR was 19 hours long, so maybe that TV series is still in the works? Bousman and his collaborators have created an intriguing mythology here, so it would be really interesting to see where else they might go with it. 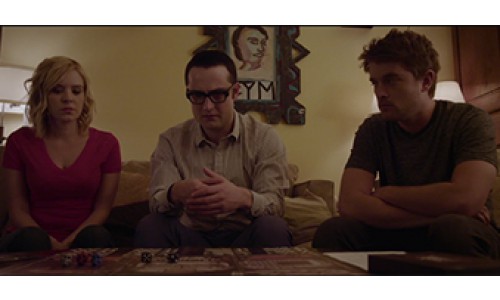 Seven months after the disappearance of their father, brothers Gordon (Graham Skipper) and John (Chase Williamson) get together to clean out his old video store. When they go into the store’s office, they discover their father had been in the middle of playing a VCR board game called “Beyond the Gates” when he went missing. Intrigued, they watch the tape, but soon discover it’s much more than just a game. As far as dead tech hooks go, the VCR board game is a new one and it lends itself perfectly to the 80s throwback tone of BEYOND THE GATES. It takes place in modern day, but the atmosphere is prime Satanic Panic. Barbara Crampton plays Evelyn, the mysterious hostess on the board game tape, providing director/co-writer Jackson Stewart a direct link to some of the 1980s horror films that obviously inspired this film. The whole cast is fantastic, and Stewart nails the tone, making BEYOND THE GATES one of the most fun horror films of the year. Stewart attended the BCHFF screening along with cast members Barbara Crampton, Brea Grant, and Chase Williamson for a fun post-screening Q&A. 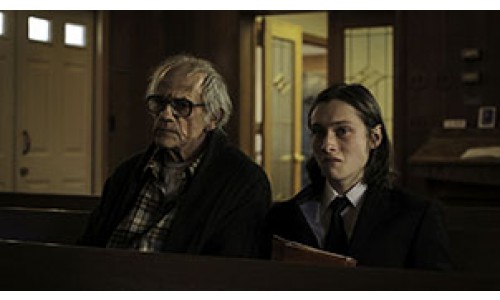 I AM NOT A SERIAL KILLER (Ireland, dir. Billy O’Brien – Chicago premiere)

John Wayne Cleaver (Max Records) is a high schooler who works at his mother’s funeral home and whose therapist Dr. Neblin (Karl Geary) has diagnosed him as a sociopath. John has a set of rules he follows to prevent him from hurting others, but when a rash of murders strikes the small town where he lives John begins breaking those rules as he launches his own investigation into the killings. He quickly learns that there is something in town much more dangerous than himself. I AM NOT A SERIAL KILLER is flat-out amazing, a seemingly effortless hybrid of mystery, horror, and coming of age stories driven by a pair of fantastic lead performances by Max Records and Christopher Lloyd as Crowley, John’s elderly neighbor. It’s often quite funny, but it also manages to be touching and unsettling without ever tipping too far into any one direction. It also looks beautiful, shot on 16mm film to give it a warm, pleasingly analog grain. Christopher Lloyd was at the BCHFF screening for a post-screening Q&A that unsurprisingly covered a lot of ground in his long career, and it was even more obvious that this film was a project close to his heart. This is one of the best films of the year, horror or otherwise, and will hopefully be out later this year from IFC Midnight. 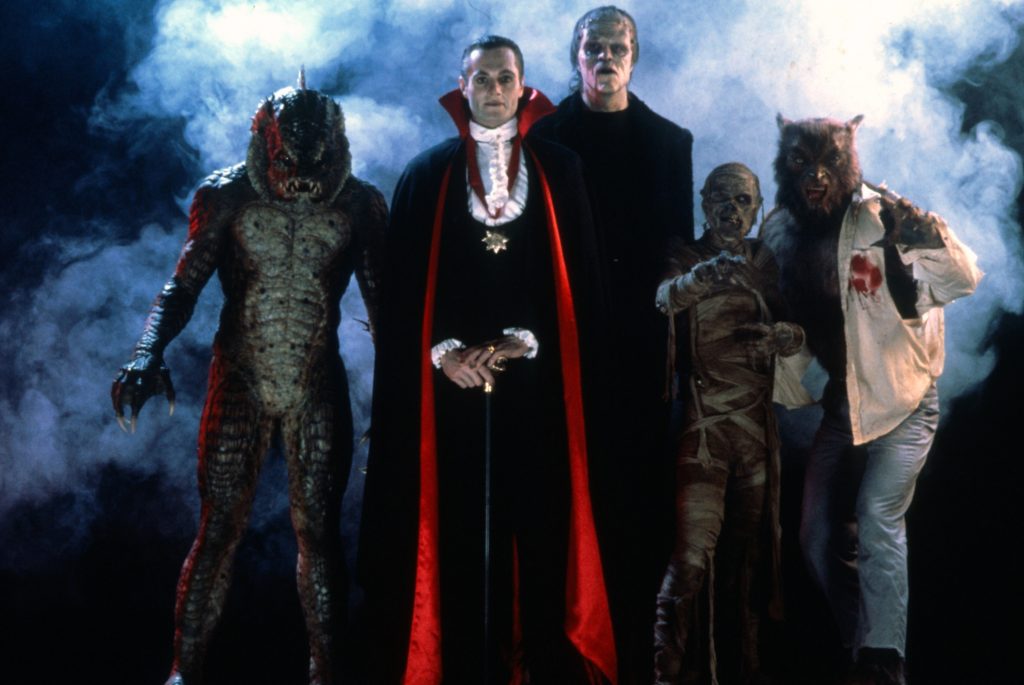 Following I AM NOT A SERIAL KILLER was a 30th-anniversary screening of THE MONSTER SQUAD. Bruce Campbell was on hand to introduce the film and special guests Andre Gower (who played “Sean”) and Ryan Lambert (who played “Rudy”). Gower and Lambert said a few brief words before bringing out writer/director Fred Dekker to accept the first BCHFF Groovy As Hell Lifetime Achievement Award, which is a very convincing replica of the hand chainsaw Ash wields in the EVIL DEAD films and series. THE MONSTER SQUAD is always great fun to see with an audience, and the BCHFF crowd was especially enthusiastic. Dekker, Gower, and Lambert did a super-fun Q&A after the film. 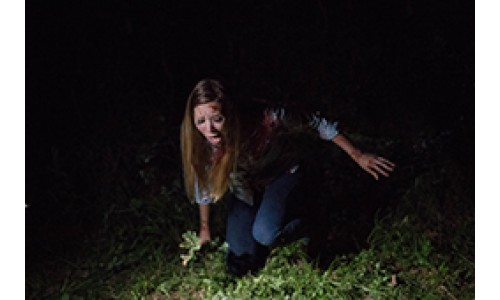 Producer/actor Derek (Carter Roy) has gathered a small crew and his ex-wife Amy (Alena von Stroheim) to shoot a “found footage” horror movie at a remote house owned by Amy’s family. It’s about a married couple whose relationship is disintegrating who unwittingly go to a haunted house to give their marriage one last shot. This is also basically the same thing that is happening between Derek and Amy in real life, and although it sounds like a fairly standard “found footage” setup, Derek has come up with a gimmick to help them market the movie: it will be the first “found footage” movie shot in 3D. As the days wear on, tensions mount and the line between the film and their circumstances starts to blur. FOUND FOOTAGE 3D is a both a brilliant satire of “found footage” horror movies and one of the best examples of the form itself. Basically, with this film Steven DeGennaro has given “found footage” its equivalent of what Scott Glosserman’s BEHIND THE MASK: THE RISE OF LESLIE VERNON did for slasher movies. The cast is great, it’s very funny and it uses 3D in inventive and innovative ways. This is seriously one of the best uses of 3D I’ve ever seen.

This was the first world premiere for the BCHFF, and appropriately the entire cast of the film was on hand as well as writer/director Steven DeGennaro. They revealed that the cast had all had experience in comedy and improve, which definitely showed in the final product. DeGennaro also happily admitted to being a huge fan of the “found footage” style of horror, which again was unsurprising given how thoughtfully this film plays with its conventions. Here’s hoping this film gets a wide release on big screens, because it absolutely needs to be seen in that format. 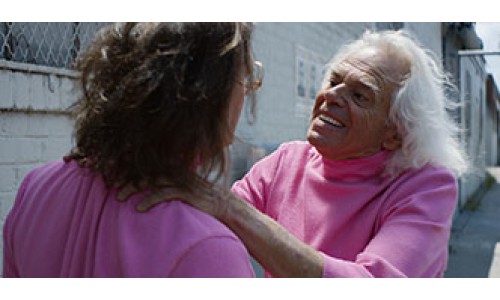 A monstrous serial killer is on the loose in Los Angeles, leaving a trail of bodies and streaks of thick grease in his wake. Big Ronnie (Michael St. Michaels) lives with his son Big Brayden (Sky Elobar) and they give “disco tours” of the city, in which Ronnie points at buildings and claims disco stars were there at some point. During one tour, Brayden meets Janet (Elizabeth De Razzo), and a romance blossoms. There’s a complication, though: Big Ronnie is the Greasy Strangler, and he also can’t stand to see his son happy. A weird love triangle develops, and everybody says “shit” a lot.

The experience of watching THE GREASY STRANGLER is roughly akin to being locked in a room with a very enthusiastic 14-year-old theater kid who was just shown an episode of TIM & ERIC AWESOME SHOW, GREAT JOB!, thought it was the funniest thing they had ever seen, and spends about 93 minutes repeatedly retelling to you everything that happened in the episode while the song “Daddy Would You Like Some Sausages?” from FREDDY GOT FINGERED plays on a constant loop. It’s a shameless lift of those references’ sensibilities with no understanding of what made them so interesting and unsettling. Instead, THE GREASY STRANGLER constantly milks the same handful of “jokes” over and over again: some guys have big penises, others have small ones, disco is inherently funny, sometimes people who don’t look like people in Hollywood studio movies are naked and have sex with each other, saying the same thing over and over again will eventually make it funny, etc. If that sounds like something that would appeal to you, have at it. Anyone else would do better to watch one episode of AWESOME SHOW and decide whether or not they want to ever watch anything like that again first.