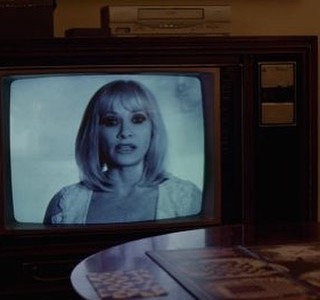 The second screening on day two of the BRUCE CAMPBELL HORROR FILM FESTIVAL was BEYOND THE GATES. From first time director Jackson Stewart, BEYOND THE GATES concerns a haunted VHS board game in the vein of NIGHTMARE that a pair of estranged brothers—Graham Skipper (THE MINDS EYE) and Chase Williamson (JOHN DIES AT THE END, THE GUEST) must play in order to save their father’s soul. Direct to video horror luminary Barbara Crampton portrays the game’s gate keeper with creepy, big-eyed, Barbara Steele-panache. 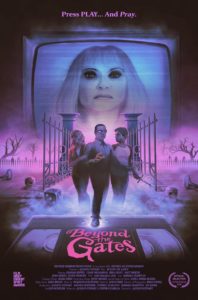 BEYOND THE GATES is a loving nod to films such as THE GATE and PHANTASM that retains a light touch while also providing some gloriously shocking gore. Stewart lifts a cool blue and magenta color pallets from NIGHT OF THE CREEPS and FROM BEYOND that gives certain scenes in the film a perfect other worldly quality. For all the VHS fetishizing, nods to classic horror, and scares, the scenes focusing on the brothers show some real heart and gravitas—similar to Mike and Jody in PHANTASM—that never seems disingenuous or cloying thanks to Williamson’s undeniable onscreen charm. 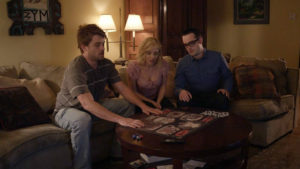 After the screening, Stewart, Williamson, Crampton,were joined by star Bea Grant in a Q & A session moderated by Scott Weinberg. DAILY GRINDHOUSE was on the scene as the cast and crew discussed the film’s mish-mash of tones, influences, and Barbara Crampton taking on the role of producer.