Day four of the 2016 BCHFF kicked off with a block of horror shorts. There was a wide variety of films, and they were all solid. Joel Ashton McCarthy’s “I Love You So Much It’s Killing Them” is a fun black comedy about a meticulous female serial killer who loses focus when she falls in love with a baseball-obsessed coworker. Izzy Lee’s “Innsmouth” is a dark police procedural and female-centric take on Lovecraft mythology. Chris McInroy’s “Death Metal” and Brian Lonano’s “Gwilliam” were seriously goofy and really bizarre, respectively—in “Death Metal,” a struggling metal guitarist is given a guitar made by Satan and immediately breaks all the rules regarding how to use it with gruesome consequences. “Gwilliam” follows a man just released from prison who finds a very unexpected good time in the alley behind a dive bar. “Madre de Dios” by Gigi Saul Guerero stars Tristan Risk (who also stars in “Innsmouth”) as a woman being used in a dark ritual, and Justin Harding’s “Kookie” shows what happens when a little girl’s desire for cookies overrules her good sense to stay away from the scary new clown cookie jar. Finally, Vivieno Caldinelli’s “Portal to Hell!!!” features the late “Rowdy” Roddy Piper as a building superintendent who happens upon a pair of tenants trying to open the titular portal in his building’s basement. 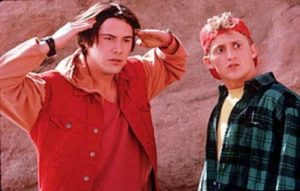 Following the short film block was a 25th anniversary screening of BILL AND TED’S BOGUS JOURNEY with director Peter Hewitt and star William Sadler. The two men had not seen each other in many years, and their post-screening Q&A went long as they did some catching up with each other along with answering questions from the audience. 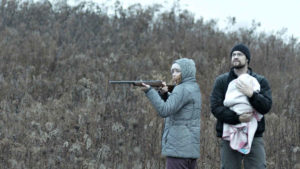 Ann (Lucy Walters) lives deep in the woods by herself following the collapse of society due to a virus that turns the afflicted into mindless cannibals. She’s carved out a little life for herself defined by routines and rituals. HERE ALONE follows Ann in the present and follows a parallel story in flashbacks to how she and her husband Jason (Shane West) and infant daughter fled their home and civilization. When she meets a young girl named Olivia (Gina Piersanti) and Olivia’s mother’s boyfriend Chris (Adam David Thompson), Ann gets a glimpse of what a new life might be like if she could forgive herself for her family’s deaths. But the monsters roaming the countryside may not be the most dangerous thing in the world. HERE ALONE is a meditative, beautifully shot post-apocalyptic film with strong performances by its three leads. However, anyone who suffers from Chronic Apocalypse Fatigue brought on by watching legions of microbudget PA movies may find the film a little too familiar. Despite its high level of technical artistry, this is still a movie about a small group of people fighting “zombies” in a struggle to survive. It’s a particularly well-made version of that story, but at its heart it’s not much different from its peers. 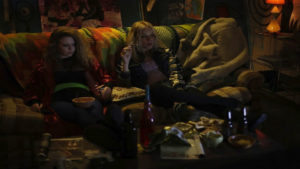 Hard-partying Lou (Natasha Lyonne) has a rough night while out at a party with her best friend Sadie (Chloë Sevigny) that she can’t quite remember the next day. Soon after, she begins to exhibit symptoms of an impossibly accelerated pregnancy. Meanwhile, Sadie’s ruthless drug dealer Gabriel (Mark Webber) has acquired something new he wants to sell on the street even though he doesn’t seem to know what it actually is. As Lou’s condition gets progressively worse, she meets a weird hippie named Lorna (Meg Tilly) who seems to know more about the situation than anyone directly involved in it. ANTIBIRTH is the latest film from writer/director Danny Perez, perhaps best known for directing the feature-length “visual album” ODDSAC for the band Animal Collective. It’s tough to get a handle on what this film is supposed to be until it’s nearly over, when things start to go seriously wrong for his deeply unsympathetic characters. Lyonne is compelling as always, but Lou is ultimately a hollow punchline. There are some flashes of surreal horror that hint at what Perez is really capable of, but the ironic detachment and blatant contempt for his characters make ANTIBIRTH feel like a messy collision between Todd Solondz indulging his worst instincts and juvenile horror shock tactics. Still, there are enough interesting moments here to warrant keeping an eye on what Perez does going forward. 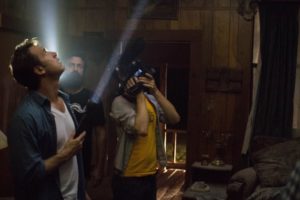 Before the final film screening of the festival, Bruce Campbell came out for the first BCHFF Jury Award. The trophy was apparently still in the works, but the award went to FOUND FOOTAGE 3D and writer/director Steven DeGennaro. Campbell suggested that the festival was in the process of producing an anthology film made up of “the least shitty shorts” submitted to the festival. Maybe that will make its world premiere at next year’s BCHFF? 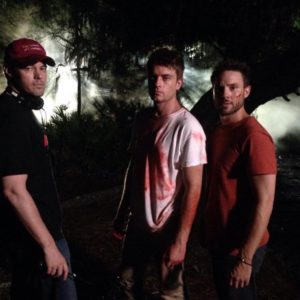 Jonah (Chase Williamson) is not really looking forward to the weekend-long bachelor party his brother Mac (Michael Aaron Milligan) has planned for him and their friends Rand (Hayes Mercure) and Elliott (Randy McDowell). Mac, disappointed by the seedy strip club where they end up, runs into a man who suggests the men follow him to an underground club at an isolated mansion where they can really have a wild time. Jonah reluctantly agrees and they drive to the home of Mr. Nyx (Justin Welborn), who offers Jonah an unforgettable experience with a very strange asking price from his friends. When Jonah discovers Lily (Hannah Fierman) is locked in a room at the club, he and Rand free her and flee, kicking off a desperate hunt for the men and Lily, who is hardly the victim she initially seems. Inspired by the short “Amateur Night” from the first V/H/S anthology, SIREN brings Hannah Fierman back to reprise her role in a completely standalone story. This is director Gregg Bishop’s first feature since 2008’s DANCE OF THE DEAD, and like that film Bishop keeps the action moving at a brisk pace. While this is darker than that previous film, SIREN is similarly a fun little creature feature with a great cast.

Director Gregg Bishop, star Chase Williamson, and writers Ben Collins and Luke Piotrowski were in attendance for a post-screening Q&A. Among other topics, they talked about the heavy involvement of David Bruckner in the production of the film. Bruckner directed the original “Amateur Night” short and was originally planning to direct this film until he was tapped to work on the new FRIDAY THE 13th film (which he has sadly since left). Everyone had great stories about Justin Welborn, a veteran horror actor who also appeared in BEYOND THE GATES with star Chase Williamson and DANCE OF THE DEAD among many other independent genre films. Their Q&A was fun and relaxed, a perfect way to cap off a wild weekend packed with a wide variety of different approaches to the horror genre. It’s honestly going to be tough to top this year’s lineup, but I can’t wait to see them try in 2017!