“In Mexico, even atheists are believers.” — BELZEBUTH.

When one thinks of Mexican horror, the immediate thought goes towards the work of Guillermo Del Toro, and understandably so; his work is iconic, masterful, and in many cases transcends genre entirely.

But wearing Del-Toro-shaped blinders does a disservice to the other fantastic films coming out of the country: Films such as director Emilio Portes’ BELZEBUTH. 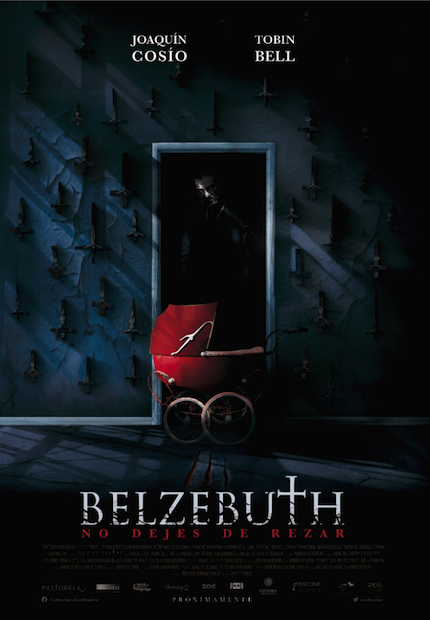 BELZEBUTH takes place in a Mexican border city that has become plagued by a series of violent, inexplicable mass murders of children by their caretakers and peers; from a natal nurse, to a student, to a janitor, and more. Rocked by the death of his child and subsequent suicide of his wife at the hands of one of these murderers, Detective Ritter (Joaquín Cosío) is put on the case with his longtime partner Dimitrio; but what seems like a tragic series of serial killings becomes something much more sinister when American paranormal agent and former priest Ivan Franco (Tate Ellington) joins the investigation under suspicion of demonic posession. The three agents then must track down the potential source of the killings before more lives are lost, putting them on the trail of a disgraced holy man excommunicated from the Vatican and one little boy both tied to and miraculously spared from each and every massacre.

Possession movies are easy to fuck up. For every EXORCIST and EMILY ROSE and [ • REC], there are dozens of self-same sequels and slasher-esque attempts that fall flat, either because they rely too much on shock and awe over story and character, or because in an increasingly secular society the subject matter is treated more as a hokey joke than as a strongly held religious concept by hundreds of people worldwide. Portes takes possession, Mexican Catholicism, and religious iconography with utmost respect and sincerity, and it comes across in spades; softening and giving solid backing to a kind of grotesque violence that could have come off as exploitative and callous otherwise.

The film also knows when to show its cards and when to tease the audience with the supernatural. Unlike some films, where you can watch a character contort their body and speak in tongues and swear at random every ten or so minutes, BELZEBUTH saves its full demonic spectacle for two major scenes: one fantastically-acted and backed with an amazing  atmosphere of claustrophobia, and the other a scene showcasing some of the most incredible special effects that combine with a haunting vocal delivery to make what is in my opinion one of the best possession scenes on film. Period.

The casting showcased is also very strong. Cosío pours so much despair and humanity into a character who could very easily swing to wooden and hateable in poorer hands,  and his growth personally and as an ally to Ivan is paced extremely well. Additionally, the child actor at the forefront does a great job portraying both a childlike naivete and an almost eerie sense of premonition and ethereal stature. The disgraced priest, though recipient of minimal screen time overall, is also bolstered by the inimitable Tobin Bell of SAW fame, who is the perfect blend of authoritative and soul-searingly grim that made him a household name in horror in the first place.

In the environment of immigrant detention camps, bubbling religious tensions, and fraught relations between the US and Mexico, BELZEBUTH feels extremely timely if not prescient, which in an industry where films can take months or years to reach full fruition is an achievement in itself. A former director and writer of horror comedy, Emilio Portes stepped into new territory for his first complete horror project, and he definitely came to play. Hopefully this film becomes a beacon to shine wider light onto the vast potential Mexican horror has to offer.