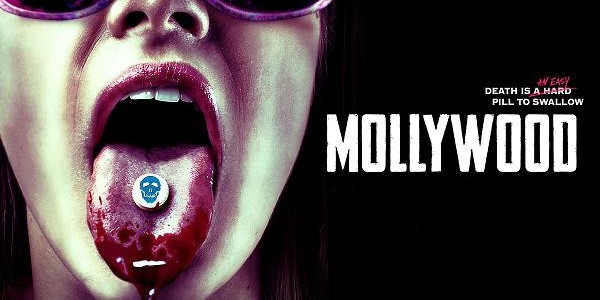 Set in a grim urban Chicago, MOLLYWOOD follows a modern-day Jack the Ripper serial killer who lures his victims from the club scene by promising to offer them high-end drugs. Micah Fitzgerald turns in an enigmatic performance as Chase, the mysterious killer, who cites religious motivation and a moral imperative to his work. First-time director Morocco Vaughan had a chance to talk to Daily Grindhouse about rave culture, the link between psychological thrillers and horror, and the joy of finding atypical EDM music. 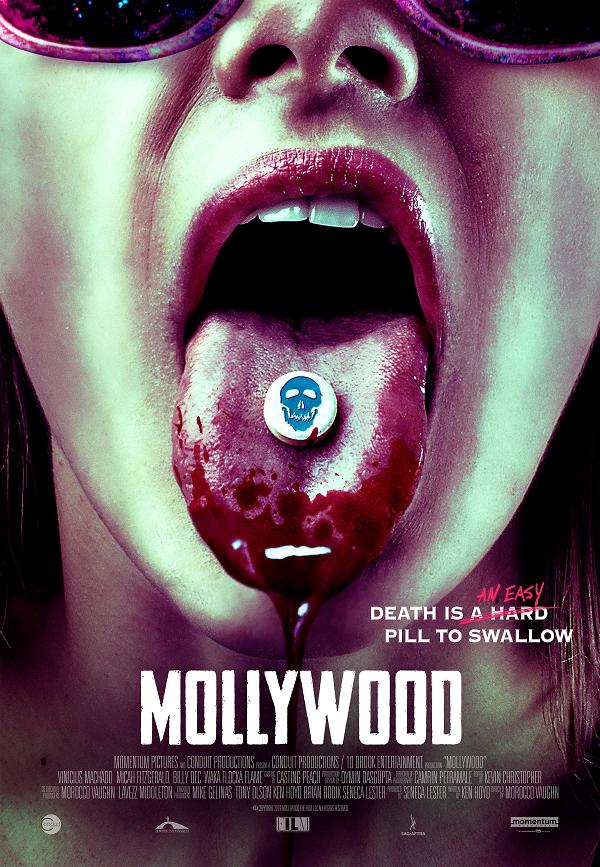 Daily Grindhouse: What attracted you to this script?

Morocco Vaughn: I’ve never seen anything like it. It’s about basically a modern-day Jack the Ripper. It was engrossing. I was like wow, that sounds dope. That’s what drew me to the movie.

Daily Grindhouse: Why do you think the Chicago setting was so important?

Morocco Vaughn: I’m from Chicago and the writer [Ken Hoyd] was from Chicago, so I think that’s where we picked it up. But Chicago is a great city to film in. You can get a lot of different looks, and that urban environment, that’s what it’s known for. I think it’s the reason why Christopher Nolan would choose to do BATMAN in Chicago.

Daily Grindhouse: This was actually the first film you directed. What was that like?

Morocco Vaughn: It was educational. It was like a crash course in learning Filmmaking 101. It shook me. It scared me. But it made me learn in a quick way exactly how to put together a shoot.

Daily Grindhouse: What was it like working with the cast that you had?

Morocco Vaughn: The cast was fantastic. Again, it was another learning experience. I’ll keep saying it, Micah Fitzgerald is an amazing actor. And where so other actors it felt easier to control, Micah was a wild horse. And he challenged me, and I challenged him back, and that’s what made a great piece of art.

Daily Grindhouse: What was it like working with first-time screenwriter Ken Hoyd?

Morocco Vaughn: It was amazing. What was so strange, which I don’t advise, my writer was on stage. The guy who wrote it, the script was bought from him and he’s nowhere to be found. So in instances where I’m putting together a scene, and I’m trying to understand a character’s motivation, and the actor’s trying to understand the backstory, should he do that, we have a writer whispering in the back, no he shouldn’t do that, you know what I mean? So it actually assisted in the process, having the screenwriter on set. So that was a little weird. I don’t advise it anymore, but it was my first experience.

Daily Grindhouse: Did you do any research into drug culture for the making of this film?

Morocco Vaughn: I actually did. Drug culture kind of intertwined with the EDM scene. It’s definitely the norm. At these festivals hallucinogens, your molly, your ecstasy, not so much the hard drugs but the party drugs are more commonplace at EDM festivals and raves. The drugs in the movie take on a whole other character, they’re kind of like a complement to the killer, because he uses them to get close to his victims. If you avoid the drugs, you avoid him. I did a decent amount of research on dealing with it. Actually while we were filming, we were kind of scared cause the Las Vegas shooting had taken place. We didn’t know if distributors were gonna steer clear of us because something like a mass shooting took place at a festival. We kind of re-routed it and dumbed down our vision of a grand festival and made this a party, just a rave as opposed to being an outdoor festival.

Daily Grindhouse: Was there any serial killer that Chase was modeled after?

Morocco Vaughn: I would have to ask the writer who he may have modeled him after. He was kind of a clean slate and we had to paint him. I think of Jack the Ripper stalking his victims back in the old days in England where he would basically go and be the scourge of the town, of the transients, of the alcoholics, the prostitutes, things like that. I think that’s our character’s kind of motivation. I’ve been thinking about what other characters he seems like, and the only guy I can think of that he may be based on is the Kevin Spacey character in SEVEN, because he has the religious motivation, but he’s kind of his own character, his own creation.

Daily Grindhouse: Why is it important to conceal Chase’s face for such a long time in the movie?

Morocco Vaughn: I think it made it scarier for me. I think you could hear his voice, you could see his silhouette, and I think that was scary enough so by the time you actually see his face, you feel committed to him. But I wanted to keep a little bit of mystery, and the intention was coming up with a misdirection character. There were complications in filming where that other character didn’t play against himself. It was a play on letting his voice lift more than his face did.

Daily Grindhouse: It seems like music was very important in this movie. How did you find or work with the music in the movie?

Morocco Vaughn: The music element was everything. There were two components, the composing which was done by Holly Amber Church, and then the other element was done through various local music artists throughout Chicago and a couple from Atlanta. The composition was amazing. I actually flew to L.A., sat down with Holly, and composed the film with her. And she did an amazing job. We completely transformed after her proposal. And I actually went and re-arranged the tracks, just because what she was able to do composition-wise tripled, made it a whole other film. And then when it came to the music artists, I listened to tons and tons of EDM music that just sounded kind of original in place. I wanted things that kind of sounded not like the common beat that you might hear. So we would lay some tracks, and we played along with the visual and figured out what would match up and what wouldn’t. Waka (Flocka Flame) actually gave us a track late and it’s actually called, “Turn It To A Rave.” And that track actually has a lot of energy and is a shout-out to music videos.

Daily Grindhouse: What was it like working within in the genre of a psychological thriller?

Morocco Vaughn: I love the genre. It was amazing. It’s one of my favorite kind of films, of course. Films that have influenced me while creating this are GET OUT, definitely. And it came out when we wrapped principal production. SPLIT by M. Night Shyamalan. And even old classics like SILENCE OF THE LAMBS. That’s my favorite part of the thriller world, there’s really a horror element to it. I find it scarier because it’s believable, rather than something that’s supernatural.

Daily Grindhouse: How did you work with the gore effects in the movie?

Morocco Vaughn: It was fun. My special effects makeup artist did a great job. Well we had several, but the one for the neck-slit, her name was Sarah, she was amazing. It was difficult because on a limited budget, she only got one time to do it. We only had a one-camera shoot, so you mess up one angle one time, you lose. So we actually had to shoot the neck-slit twice, and we had to wash off the hospital gown, let it dry, and put it back on my actress, so we could get it one more good time. Sometimes the blood doesn’t squirt out like you want it to, so that was a fun moment. We actually nailed it. Other things were tough, like gunshots. You only have a certain amount of clothing. You can’t expose the actors to repeated explosions on the chest. They get tired of that real quick. So you’ve got to be coordinated and just hope you get it the right way. So I think we did a great job with our resources.

Daily Grindhouse: Can you talk about the colors and lights in the film, at the raves and elsewhere?

Morocco Vaughn: That was two parts. One is my cinematographer [Camrin Petramale]. I gave him reference films that he liked and I liked, and I kept seeing the images for each scene, you know it was motivation for the way we wanted to do it. And then when we wanted to get the physical locations, we ran into some complications, like the cast light depended on whatever time of the day we were filming, how close to sunset, and we’d have to make adjustments. But I wanted something that felt like THE DARK KNIGHT, like Christopher Nolan, the Batman installment. At the same time, for the club aspects I wanted something that was like JOHN WICK. And I think we did our best job at merging those two things.

Daily Grindhouse: You’ve worked in other capacities in film before you’ve directed. How was this different?

Morocco Vaughn: It was completely different. I’ve done music videos, I’ve done commercials, and it was worlds apart. I think I was a little arrogant before doing a film. I thought it’s a movie, it’s just like doing a music video twenty times in a row, right? No, I was completely wrong. It’s a marathon compared to a sprint. It is an orchestra compared to just playing in a band. You have so many people that are responsible for all these separate duties, and they’re looking to you for direction, and you have to have answers. Being the director is more like having the answer. When your wardrobe person asks you if the character should have on a red shirt or a blue shirt, you have to know which one makes sense to that character. And everybody is looking for that form of direction from you, so I think it’s literally like being a composer in an orchestra. That was the biggest difference to me between my previous work and doing film.

Daily Grindhouse: What was the general sound design process like?

Morocco Vaughn: The sound design element was great. My boys Matt (Schultz) and I forget his partner’s name, but sound design is the element that makes or breaks a feature. We think of the normal stuff like Foley, just hearing someone’s footsteps if they walk by. But then you don’t think about breathing. And then you don’t think about crowd ambience. When we’re doing the club scenes, you need to be able to hear conversations going on in the background. There’s so many layers. I think at one point we had about thirty different layers going on in one scene. And everything affects something else. So if you hear a gunshot, you gotta be able to hear the gunshot but you gotta be able to hear yelling at the same time. Then you gotta hear crowd reaction. You gotta hear feet scurrying about. And that’s where filmmaking is really either completed or not completed, is the sound department. We had great sound design. Sometimes the sound guy on set when we were in production, he’d do such a great job, and we had to do ADR and we had to use the sound to really make a scene and make it pop out. My sound department did a great job at that.

MOLLYWOOD is now available for streaming.