Even if you don’t care for his films, it’s hard to question that Larry Fessenden is one of the most interesting genre filmmakers working today. Films like HABIT, NO TELLING, WENDIGO and THE LAST WINTER have taken genre film conventions and explored them with a more character-based and philosophical edge, providing a much-needed different take on classic horror tropes that are compelling, even when they’re not entirely successful. His work as a producer is a cut above the average fare in terms of ambition – STAKELAND, THE HOUSE OF THE DEVIL, I SELL THE DEAD and THE INNKEEPERS all come from filmmakers who genuinely want to make something noteworthy.

With this background, the made-for-Chiller BENEATH, his first film as a director since 2006’s LAST WINTER (save for an episode of the anthology “Fear Itself”), should have been a solid return to form. As NO TELLING was inspired by “Frankenstein” and LAST WINTER was a take on Carpenter’s THE THING, BENEATH is, on the surface, a film inspired by JAWS, the Spielberg classic about which Fessenden has had no qualms about mentioning his obsession. At Fessenden’s insistence, the film uses a large animatronic model for its main killer critter, a solid change from the CGI monstrosities that vaguely interact with the cast members of made-for-SyFy fodder. Throw in an isolated setting, and BENEATH should have been at least a curious genre-bender, one that creates something new out of its heritage rather than just regurgitating the same old clichés in a shiny new package. 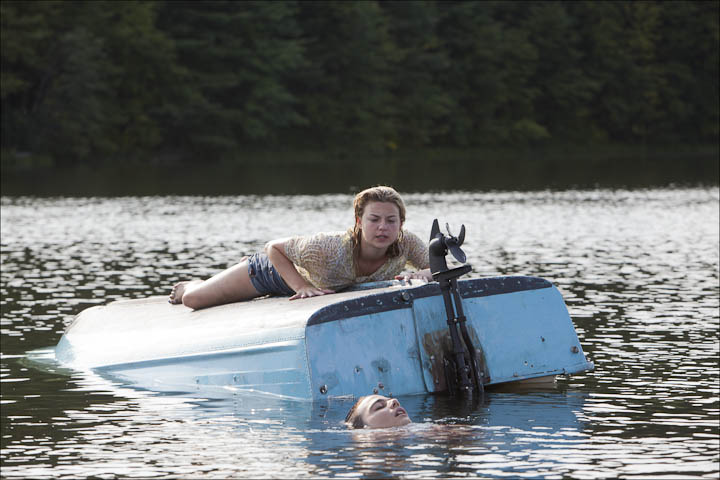 The group of six folks whose turmoil takes up the bulk of BENEATH’s running time are an assortment of new graduates from high school including a pair of dueling jock brothers, a depressed guy that looks like Johnny Depp (his name is “Johnny,” so it’s easy to remember), a would-be film student who films everything with his wrist camera, a girl whom everyone is in love with, and a brunette girl who is, um, also there. They find their graduation party trek imperiled when the their rowboat-driven path across a small lake is halted by the attack of a giant catfish creature, and they find themselves picked off one by one, often by their own stubbornness in an effort to use one member of their group as a sacrifice to distract the creature so the others can paddle away.

This is all well and good, and if you’re thinking that this sounds like a feature-length version of Stephen King’s “The Raft” (notably adapted as the tolerable part of CREEPSHOW 2), you’re not far off. As a set-up, it can certainly make for an interesting horror film, a compelling character drama or, in the case of Hitchcock’s LIFEBOAT or Scott Smith’s “The Ruins,” both. 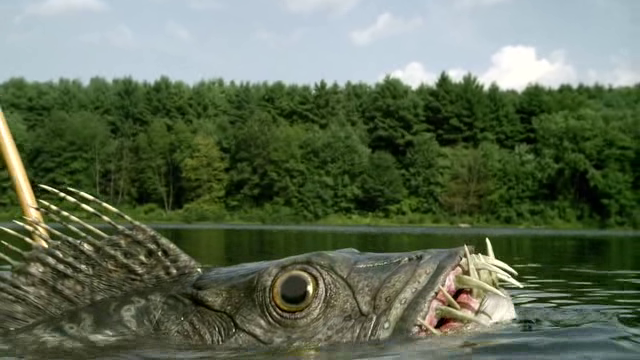 The first issue is that BENEATH doesn’t feel like a horror movie at all. Set entirely during the day, Fessenden doesn’t seem to bother setting up anything regarding suspense, and when the fish does appear, it’s… not good. As an animatronic figure, it’s impressive, but it’s totally unconvincing as a source of danger, and it feels more like a children’s show mascot that got loose than a blood-craving figure of frightening horror. (And we see it a lot, so it’s not as though there’s any attempt to disguise the look under the shadows.) The “lake” also just looks like a particularly large pond, and, combined with the speed of the fish, it never feels like the group is in any danger they couldn’t get out of by paddling for a few hundred feet. The schizophrenic music from Will Bates doesn’t really stick with any tone, and sometimes seems to be upbeat to the point that it’s mocking the drama on screen.

Now, BENEATH may not even be intended as a horror film. I’ll even give Fessenden the benefit of the doubt and say that the film and the screenplay, by Tony Daniel (not the science fiction writer or the Detective Comics artist) and Brian D. Smith, is meant as an examination of the genre, so the set-up is supposed to be haphazard and the dangers aren’t supposed to be convincing. So let’s be generous and look at BENEATH as a satire on… er, characters in horror movies. Or something.

That doesn’t really work either. The characters are so one-note and annoying that it doesn’t manage to be anything close to compelling as a character drama, and they’re not bold enough archetypes that it plays as satire. They all go through the motions – secrets are revealed, they start turning against each other, and friends turn violent – but the dialogue is neither something that human beings would actually say nor a coy reference to the idea of what a character in a movie would say, and the actors stumble across the words with an awkwardness that suggests they have no idea how to play the characters either.

I spent most of BENEATH waiting for the other shoe to drop – something that would convince me that Fessenden and the rest of those involved with the film had some grand plan as to what they were doing. It often seems like a colossal joke on the idea of the film, as though instead of taking on JAWS, Fessenden decided he wanted to make a deliberately crummy version of PIRANHA 3DD without the gore or nudity, but if it was, there was no punchline. It’s a shame, as the plotting is actually fairly clever and could have easily been made into a solid film with better dialogue and an execution that was the least bit convincing.

Shout Factory’s Blu-Ray of the film, however, looks great – unfortunately, that makes the monster look even more like a refugee from “Kukla, Fran and Ollie” than it would have otherwise. A commentary is included, along with a behind-the-scenes short and a trailer. The best feature on the disc is easily “Fessenden on JAWS,” a short that includes Fessenden’s clever 1978 short inspired by the film, followed by the director showing off his model recreation of Quint’s boat, the Orca. Both segments of the 17-minute short show more inventiveness and talent than anything in BENEATH – you wonder what the heck happened during the production process to make BENEATH such a question mark.