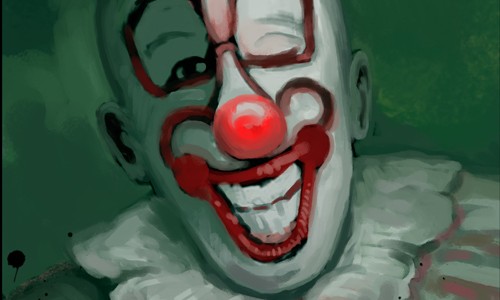 There’s no reason that STANDARDS OF LIVING should be as good as it is. Shot entirely on an iPad2, with a tiny cast and in just a few small rooms, the Twilight Zone-influenced film turns what should be crippling limitations into surprisingly effective innovations. It’s also blessed with an odd, but truly unique, concept that is intriguing enough to bypass the semi-frequent bouts of internal inconsistency. Director Aaron Mento isn’t quite able to sustain things for the entirety of the 90 minutes, but he ably proves that strong writing and acting can do a lot to combat the constraints of a low budget.

It’s a mind-bending premise. Mr. Randall (the excellent Bill Ferris) is an eccentric millionaire who has been blessed/cursed with an astounding ability: he can take any object and wish it away to a different dimension where, after twenty minutes, it returns in some sort of improved form. An empty salt shaker returns filled with salt. A crumpled bill will return brand-new. A strawberry will return dipped in chocolate. That sort of thing. Mr. Randall is also suffering from a terminal disease, and has hired struggling stand-up comedian Peter (Scott Yarborough) to act as a guinea pig in an experiment wherein he’ll be sent to the dimension and return – both to discover what the effect would be on a human, and to try and discover the whereabouts of Randall’s daughter – who vanished soon after he was granted the power. 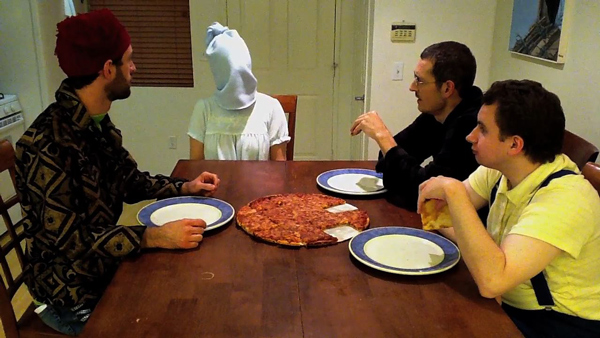 And that’s just the tip of the ice-berg. While decidedly (and pleasantly) low-tech, the film takes its odd premise into some strange territory, exploring topics as diverse as organized religion, fate, and slavery, while maintaining a healthy sense of humor thanks to Yarborough’s goofy performance. He’s a lovable loser who sleeps in a friend’s bathtub and relies on the luck given by a charmed circus peanut (don’t ask), but remains savvy enough to recognize that Mr. Randall isn’t everything that he seems. The twists and turns that follow his trip into the netherworld are highly unpredictable, and after finding his very existence threatened he’s forced to make some dramatic – and tragic – decisions.

So, you might be wondering how such a trippy sci-fi premise could be realized on a microbudget and a single iPad2. The answer is “very carefully.” Any fantastical elements are realized in the simplest way possible, with Peter’s trip occurring by simply entering a different room and placing his hands on the door while Mr. Randall uses his power from the other side. Some clever editing and sound effects do the rest of the work. I won’t give away what he finds on the “other side”, but I will say that it allows the cast the opportunity to flex their acting skills a bit, and leads directly into some unforeseen complexities that define the final act. 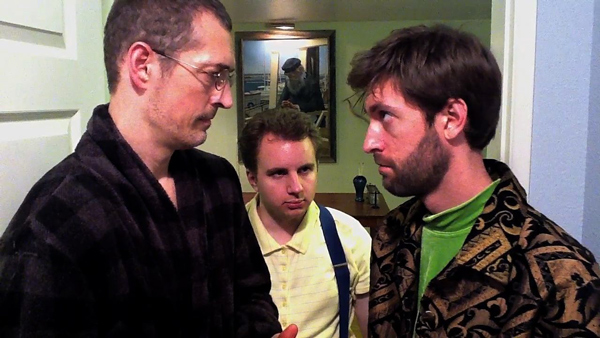 Despite being shot on what should be a rather limited piece of hardware, STANDARDS OF LIVING actually looks better than most similarly budgeted productions. Framing tends to be rather tight, and camera movement (outside of some shake during handheld shots) is non-existent, but Mento’s experience making short films has obviously paid off, particularly when it comes to clever use of the few locations. It’s no great visual wonder, but the very fact that it’s so watchable is a massive accomplishment, and shows just how accessible decent video equipment has become.

A unique mind-bender with hints of science fiction and horror, STANDARDS OF LIVING doesn’t quite stick the landing, but even a muddled final act is impressive when it comes to this level of complexity. Other low-budget productions should take note of how a strong concept, and a script that takes advantage of the potential of that concept, can help overcome massive technical limitations. But even removed from all of that, the film is entertaining, well acted, and impressively staged. A thoroughly remarkable first feature, and one well worth your time.

Also, it’s available to watch for free, so get on that.