In this era of streaming, some days it just seems like there’s too much content to sift through.  Every year, there are so many low-budget genre pictures that slip through the fingers of fans the world over, simply because they’re not getting discovered by the people that would love them most. We all pine for the glory days of 42nd Street here at Daily Grindhouse or even the VHS boom of the early ‘80s, but where are the this generations crop of low-budget, sci-fi, horror, and action trash? Who has time to sift through all these films to find the real gems and moreso, who has time to read long winded reviews? It’s a daunting task, and it requires someone who loves genre cinema more than he loves his own words, and that person may be me. That’s why we’re going to be Keeping It 400 here at Daily Grindhouse: 400 word reviews that plainly and simply let you know if these films are worth checking out. This week Mike Vanderbilt looks at BETWEEN THE TREES. 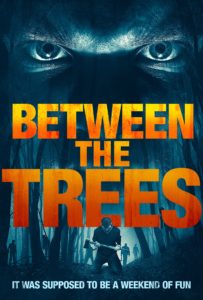 THE PLOT: Steve, suffering from a collapsing marriage, invites his three closest friends on a weekend retreat to the mountains only to discover his real troubles are in the trees that surround them. They encounter a deranged killer and their fun weekend becomes a deadly fight for survival.

THE REVIEW: When a cadre of men retreat to the woods for the weekend, someone’s going to die. It’s a trope that, while not as old as THE SEVEN SAMURAI, has been utilized in horror for decades, from the classic DELIVERANCE, to its low-budget Canadian knockoff RITUALS, to the more recent Netflix release, THE RITUAL. There’s a primal fear of being trapped in the woods, perhaps even more so these days when everyone is connected at all times.

BETWEEN THE TREES plays on the “the weekend they didn’t play golf” trope and sends four whiskey swigging men to the desolate woods for a relaxing weekend of hunting bears or deer…until they become the hunted. The cars engine is torn apart and their cellphones get no signal. Something has them on the ropes, be it man or beast. So many times in films of this ilk, the characters rarely come off as friends and I find myself asking “why would you go away for a weekend with these people.” TREES improves upon this misstep and does do a pretty good job of suggesting longtime friendships—if ever so broadly utilizing heavily expository dialogue and groan inducing, sophomoric humor—between the four men. If anything, it can be assumed the massive amounts of booze the characters partake in lubricates their friendships.

Unfortunately, despite its brisk runtime, BETWEEN THE TREES overstays its welcome. There’s probably a pretty good entry in an anthology film or television series in this story. The makeup design on the madman in the woods is appropriately creepy and the film does build up to an unexpected—and impressively played off—twist in the third act. The twist suggests deeper pathos than a run of the mill slasher in the woods flick. After what would have been a solid conclusion, the film meanders through the rest of its runtime with a “final guy” taking on the killer in what amounts to an unnecessary epilogue. There’s even a funny end credits stinger—Some of the humor undercuts the horror—that suggests even the filmmakers didn’t know what to do with this character.

BETWEEN THE TREES hardly reinvents the sub-genre, but it does employ an effective motivation for the killer that may even surprise audiences who have seen all of the films that TREES riffs on. That said, 70 minutes is just too long to get there.

THE VERDICT: A interesting twist, but a drag overall.

BETWEEN THE TREES will be on the hunt, March 5th on On Demand and Digital.

Tags: Between The Trees, keeping it 400