In this era of streaming, some days it just seems like there’s too much content to sift through.  Every year, there are so many low-budget genre pictures that slip through the fingers of fans the world over, simply because they’re not getting discovered by the people that would love them most. We all pine for the glory days of 42nd Street here at Daily Grindhouse or even the VHS boom of the early ‘80s, but where are the this generations crop of low-budget, sci-fi, horror, and action trash? Who has time to sift through all these films to find the real gems and moreso, who has time to read long winded reviews? It’s a daunting task, and it requires someone who loves genre cinema more than he loves his own words, and that person may be me. That’s why we’re going to be Keeping It 400 here at Daily Grindhouse: 400 word reviews that plainly and simply let you know if these films are worth checking out. This week Mike Vanderbilt looks at THE GLORIOUS SEVEN. 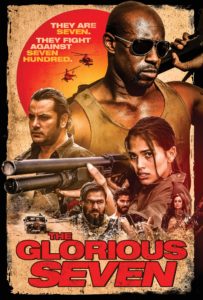 THE PLOT: Ex-military commander David Guerra is hired by a crooked millionaire to rescue his wife who was kidnapped by the leader of a guerrilla group. Guerra recruits six of his former special forces comrades to join him on this task. Outnumbered by their highly skilled opponents the seven start a seemingly hopeless and bloody mission, hoping they can pull off the unthinkable and somehow still survive.

THE REVIEW: In The Four Cycles, Jorge Luis Borges wrote that there are only four stories in the world. If there is a fifth, it is certainly THE SEVEN SAMURAI. Remade, rebooted, and retooled for everything from THE MAGNIFICENT SEVEN to A BUG’S LIFE, filmmakers perpetually return to Kurosawa’s epic drama. THE GLORIOUS SEVEN owes quite a bit to the classic tale, but owes even more to the action flicks that Menahem Golan and Yoram Globus cranked out with efficiency through out the Reagan era. 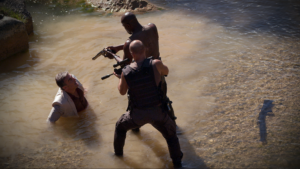 I can’t tell if THE GLORIOUS SEVEN is taking itself too seriously or not seriously at all, but that’s one of the things I like about it. Opening up with a credit sequence that introduces its cast alongside images from Kurosawa’s film as well as THE MAGNIFICENT SEVEN, THE GLORIOUS SEVEN happily wears its influences on its sleeves. The opening sequence features a prison break cribbed from Walter Hill’s 48 HOURS and leads right into a gangbusters attack on nefarious millionaire Anthony Levin’s heavily guarded compound. The action is fast, furious, and there is very little dialogue to get in the way. The escapees are a guerrilla group led by Javier Mendoza (Fernando Corral), who kidnap Levin’s wife, Valentina (Julia Mulligan). In turn, Levin calls on  ex-military commander David Guerra (Jerry Kwarteng) to put together a team of 7(!) to infiltrate the jungles where Mendoza is holding Valentina captive. 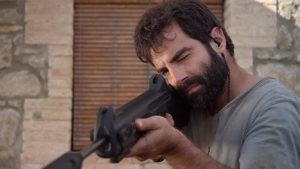 One of the best parts of any men on a mission flick—from KONG: SKULL ISLAND to THE DIRTY DOZEN—is recruiting and getting to know the team. There is a standout moment in GLORIOUS 7 where Gurrea travels to a sleazy strip club in an attempt to “put the band back together” with an old friend. At once coming off as a parody of the trope and a sincere moment, the scene showcases a wry sense of humor that’s unfortunately is absent from most of the film. 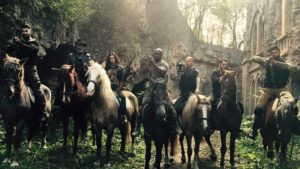 The superserious dialouge is delivered with all the hamfisted-ness of Craig Denney in the hard to find cult-classic, THE ASTROLOGER. Star Kwarteng has enough affable charm and paired  with downright beautiful photography by Brian D. Goff and Günther Neumann, everything works enough. The exotic locales pop with color and the equally colorful characters and impressive locations elevate this low-rent actioner above the usual low-budget dreck.

THE GLORIOUS SEVEN is a fun actioner cribbed directly from the Cannon playbook.

THE GLORIOUS SEVEN explodes onto VOD and DVD on March 12.