The following press release is a title announcement from Grindhouse Releasing. For more announcements, click here. 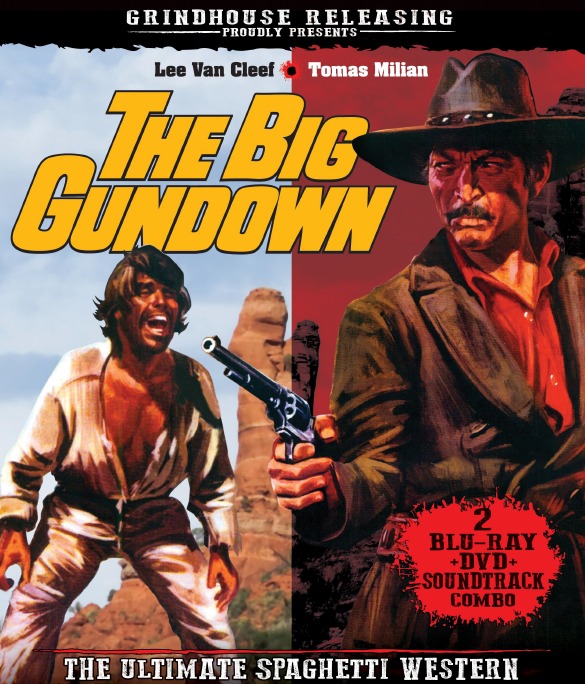 Starring the legendary Lee Van Cleef as a relentless bounty hunter on the trail of Cuchillo (Eurofilm superstar Tomas Milian), a savage Mexican outlaw accused of the rape and murder of a twelve-year-old girl, this release contains fifteen additional minutes of gunslinging action never before seen in America.

THE BIG GUNDOWN is one of the most highly acclaimed and long sought-after films in the spaghetti western genre, hailed by critics for its stunning cinematography, the amazing performances of Lee Van Cleef (following his iconic role in THE GOOD, THE BAD AND THE UGLY) and Tomas Milian, the classic Ennio Morricone music (recently used by Quentin Tarantino in INGLORIOUS BASTERDS), and the riveting direction of Sergio Sollima.

The 4-disc deluxe Blu-ray/DVD edition of THE BIG GUNDOWN, including a bonus Blu-ray of the uncensored director’s cut and a bonus CD of Ennio Morricone’s classic soundtrack, arrives in stores December 10, 2013.

Watch the trailer on the Grindhouse Releasing YouTube channel:

“Hardly a man is left alive in this bloody, gutsy and fantastically suspenseful action thriller…plus blood, filth and every variety of violence.” – Reed Porter, The LA Citizen News

“This is one of the best non-Leone westerns. The ‘hunt in the cane field’ is among the greatest ten minutes ever put on film.” – Thomas Weisser

Grindhouse Releasing’s Blu-ray/DVD editions of AN AMERICAN HIPPIE IN ISRAEL and CORRUPTION are available now. Upcoming Blu-ray releases include Frank Perry’s THE SWIMMER, starring Burt Lancaster, and S.F. Brownrigg’s SCUM OF THE EARTH.

For updates on our home video releases and theatrical screenings, visit www.GrindhouseReleasing.com.