It’s hard to write about a film like DEAD SHADOWS without feeling my review is as boring and haphazardly put together as the film.

In 1986, a comet streaks over the home of a young boy who is awakened, frightened by his father who tells him to stay in his room. The boy then overhears his parents fighting before sneaking into the kitchen where he sees his father murder his mother.

The film then jumps ahead ten years (which should make it 1996, but looks and sounds a lot like the present day, given the technology on display, the fashions, and the references to Justin Bieber). Chris (Fabian Wolfrom), the young boy from the opening scene, has grown up to be a frightened young man who spies on Claire (Blandine Marmigère), his lovely neighbor. Chris is obsessed with staying in the light and takes medication for anxiety attacks he experiences when he leaves his apartment. 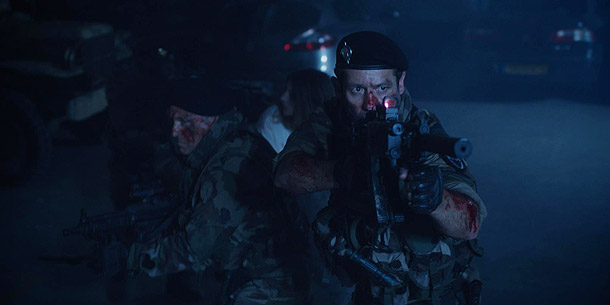 Coincidentally, a comet is scheduled to pass close to Earth, directly above Paris, where Chris lives. He plans to avoid any of the watch parties that are springing up over the city, but changes his mind when Claire invites him to one. But when the comet does pass by, it mutates most of the residents of the city, leaving those unaffected to be hunted and killed by the mutants. While Chris finds himself wandering in bewilderment through the city, fighting off attacks, trying to get to Claire, he starts to wonder if he is also mutating.

DEAD SHADOWS is a mess of a film. The first sign of trouble is the way the “ten years later” title then leads us to a point in time that is actually closer to 25 years later. But the slapdash feel doesn’t end there. It is never clear if the people are mutating or possibly possessed by aliens brought by the comet. The motivation for a burly vigilante (John Fallon) who lives in Chris’ building makes next to no sense and he is written out before he has a chance to make much of an impact as a potential action hero. This is to say nothing of the fact that it is never made clear why Chris may be mutating and if he is, why is he able to fight the mutation when no one else is able?

All this nonsensical plotting plays out against a cheaply done CGI backdrop of Paris in flames as the mutants (aliens?) tear it apart in one of the most sparsely attended apocalypses ever filmed. 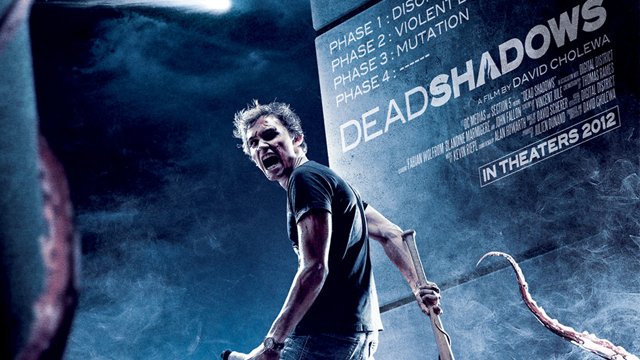 The screenplay by Vincent Julé comes across as an attempt to cross NIGHT OF THE COMET with INVASION OF THE BODY SNATCHERS. That should be a fun movie, but director David Cholewa has no sense of how to tell a story. The movie runs a scant 75 minutes (including the credits) that certainly makes it seem like Cholewa cut a ton of exposition scenes from the script. But somehow, even at this reduced running time, the film is still so dull that it feels like it is pushing two hours.

Aside from some decent acting by Wolfrom and Fallon and some fun, old school makeup effects for some of the mutants, there isn’t much to recommend in this hodgepodge of random plot elements.

Shout Factory has included a few extras on their Blu-ray release of the film. Two trailers, a couple of deleted scenes (which are more accurately described as slightly altered versions of scenes in the finished film), a comparison of scenes before and after CGI completion, and an interview with Cholewa, are offered up. Of most interest is the revealing interview with Cholewa. The director explains his past working in international film sales and how he leveraged his contacts into funding DEAD SHADOWS as his first directorial project—without any previous filmmaking experience.

A more apt explanation of how this film went so wrong so could never be found.