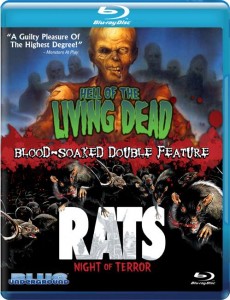 Potomac Video, the last video store in Washington, D.C., closes for good.  The store leaves behind an impressive legal legacy due to its role in the Video Privacy Protection Act of 1988, and your rental history is safe because of it.

Blue Underground announces a HELL OF THE LIVING DEAD/RATS: NIGHT OF TERROR Blu-ray double bill due out August 26.

SAVING GRACE B. JONES, a thriller with Michael Biehn, Tatum O’Neal, Penelope Ann Miller, Piper Laurie and Scott Wilson, and the directorial debut of Connie Stevens (!), is due out DVD May 24 from Image.

Kino Lorber announces that they’re starting a new line of studio classics on Blu-ray – follow them on Facebook here.

The latest Rialto Report podcast is all about KAMIKAZE HEARTS, the film depicting the relationship between Sharon Mitchell and Tigr, and it presents a retrospective with many of the film’s cast and crew.

Bleeding Skull’s Annie Choi looks at Wings Hauser and Robert Z’Dar in Joseph Merhi’s THE KILLERS EDGE, a title which could really use an apostrophe.  (It is not, in fact, about murderers who “edge.”)  (Do not look up “edging” at work.)

The big news is, of course, more GODZILLA:

And the trailer for the eagerly-anticipated RETURN TO NUKE ‘EM HIGH PART 2:

And lastly but not leastly, a trailer for Lucky McKee and Chris Sivertson’s ALL CHEERLEADERS DIE, a remake of their 2001 film, due on VOD May 8: