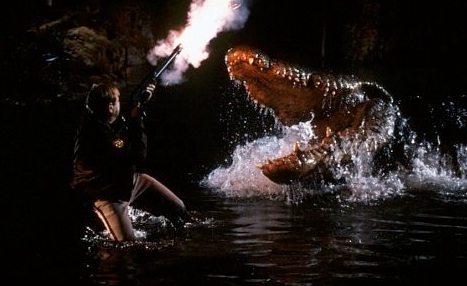 No matter what the film in question is, I always look forward to getting a re-release of a movie to review. Even if I may have had a negative recollection of a film I’ve seen before, I try to take the opportunity to revisit it with an open mind, as several years and a nice visual and audio upgrade can do wonders for one’s impression on a movie. (This also works with people.) It’s a tactic that often pays off, as my initial reluctance to watch THE FINAL TERROR gave way to being thoroughly entertained by Scream Factory’s new Blu-ray.

And then there’s LAKE PLACID. 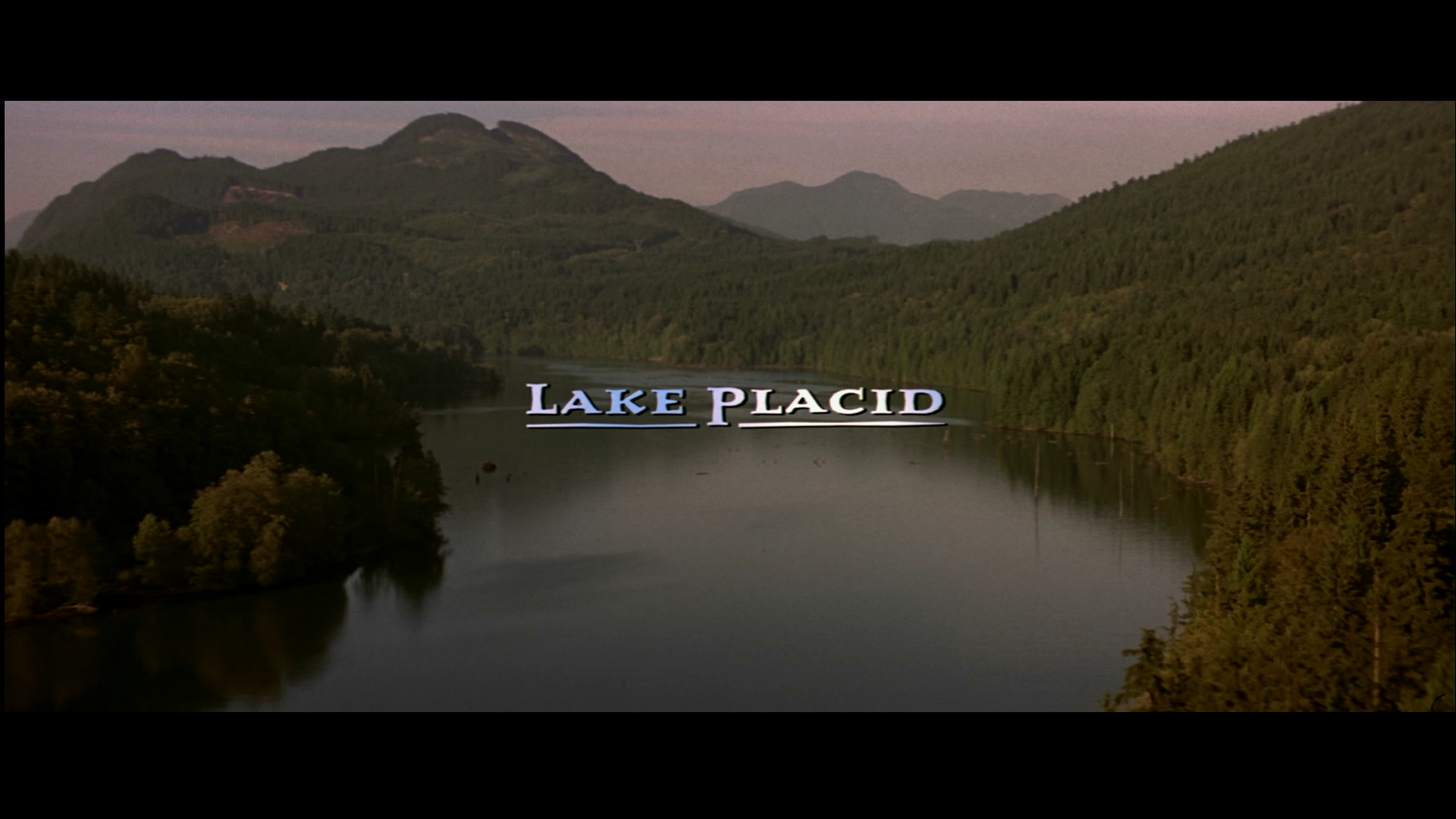 1999 brought three major nature-run-amok films to the big screen, no humble feat considering the genre hadn’t really been given much notice by studios since the one-two-three punch of TREMORS, ARACHNOPHOBIA and STEPHEN KING’S GRAVEYARD SHIFT at the beginning of the decade. Killer critters were mostly confined to the small screen or on straight-to-video time killers – comfortable homes the returned to, for the most part, when the new millennium began.

But for whatever reason, 1999 had quite a few folks making a stab at trying to make audiences distrust nature, and I saw all three of ‘em in their natural habitat. Renny Harlin provided a memorable moment with Samuel L. Jackson in DEEP BLUE SEA. The makers of BATS finally provided an eagerly-awaited teaming of Lou Diamond Phillips, Dina Meyer and Leon. And most importantly, LAKE PLACID gave us Betty White saying “cocksucker.”

Oh, it also gave us a giant crocodile and Oliver Platt camping it up, but let’s face it, Betty White swearing is LAKE PLACID’s legacy. It proved financially successful enough to warrant three “sequels” that premiered on the SyFy Channel, in that there are three additional films that contain the words “Lake Placid” in them and involve large crocodiles in a place that’s allegedly the same location as the first film. The first sequel even features a crotchety octogenarian in the form of Cloris Leachman. (The subsequent sequels feature no “Mary Tyler Moore” cast members, thus ruining the franchise. Was Georgia Engel not available?)

But my decade-and-a-half-old recollection of LAKE PLACID, beyond Betty White’s contribution, was that it just wasn’t very good. At all. I remembered it being bland, full of irritating characters, and ultimately pretty unmemorable outside of vague irritation. I was, however, determined to give LAKE PLACID a fair shake – I was going through a lot in 1999! I lived in 5 different places over the course of 9 months! I was working crazy hours at a video store! I’m a totally different person now, and I was perfectly willing to take a fresh look at LAKE PLACID as the (relatively) stable man I am today. I would dive into LAKE PLACID with no preconceptions.

And you know what? LAKE PLACID isn’t very good. At all.

LAKE PLACID is a fairly standard nature run amok film, opening with the prerequisite scene of carnage as a small Maine town sheriff (Brendan Gleeson, sporting an accent that can be described as “American,” if not specifically “Maine”) is witness to a smug researcher getting offed by a mysterious sea creature. A big city paleontologist (Bridget Fonda) is called in to investigate, and she, the sheriff and a local Fish and Game Officer (Bill Pullman) figure out that there’s a giant crocodile in the lake that’s looking to chomp down on those unlikely enough to swim by. The group is joined by an eccentric millionaire crocodile hunter (Oliver Platt) and eventually find the source of the issue – an elderly woman (White) who’s been feeding the croc cows.

There’s an attempt to trap the creature that goes awry, a little bit more gore, and an absurd finale before the inevitable sequel set up. The plot is monster movies 101, but there’s nothing inherently wrong with that – TREMORS took essentially the same mold and delivered a hugely entertaining film thanks to strong performances, a clever script and solid direction that melded humor and horror with a mastery that made it look easy.

But it’s not easy, and it’s certainly not something that the screenplay by David E. Kelley is up for. From LAKE PLACID, you’d never guess Kelley had been working as a writer for over a decade, working on and creating notable TV shows like “L.A. Law,” “Picket Fences,” “Chicago Hope,” “Ally McBeal” and “The Practice.” Known for his quick-witted characters and the ability to blend humor and drama, you may have thought he’d be able to manage the divide, but the problem is that Kelley’s script approaches PLACID with the same feel that he gave his teleplays. Everyone acts quick-witted but nobody is ever given a chance to be established as characters, and the actors portray the characters as being about twice as clever as they actually are.

The biggest issue is Fonda’s paleontologist Kelly Scott, an irritatingly one-note character that begins the movie going through a break up as an excuse to make her as unpleasant as possible. She’s sniping, condescending, and just plain not wanting to be there, a cypher of a lead, with the screenplay giving her clumsiness as a major personality trait – she’s incompetent and falls out of every moving vehicle! It’s hilarious! The romantic sparks between Fonda and Fish and Game Officer Pullman are so forced you wonder if trying to pair them off was something that the editors decided to do rather than anything in the script stage, and you continue watching only with the hopes that she’ll be eaten, yet knowing that, as the female lead, she won’t be.

The rest of the cast doesn’t get off much easier, with only Oliver Platt embracing the ridiculousness of the script and chewing the scenery to the best of his ability. Platt’s pompous millionaire is supposed to be annoying, and he is, but at least he’s having fun, which is more that can be said for anyone else involved. Gleeson and Pullman just seem to be going through the motions of their respective archetypes, and even Betty White doesn’t really offer much more than general grumpiness. Meredith Salenger and Mariska Hargitay are given little to do in non-entity parts.

Directed by Steve Miner, the genre vet of FRIDAY THE 13th PART 2 and 3, HOUSE and HALLOWEEN H20, LAKE PLACID also sports a fairly uneven tone that’s never quite fun enough to be humorous nor surprising or moody enough to be scary. We do get a cow being lowered into the lake via helicopter as bait for the decent Stan Winston-designed creature, but even overtly goofy moments like this seem to be satisfied with Kelley’s dialogue providing the only actual evidence of the absurdity of the situation.

So, no, my memory did not fail me, and LAKE PLACID is still a fairly flat horror-comedy that manages to satisfy the audience for neither despite a cussing Golden Girl, a gleeful Oliver Platt and an admittedly solid creature that doesn’t get nearly the screen time it deserves.

It’s apparently gained enough fans over the years to warrant a special edition Blu-ray release, and it does help a bit – Datyn Okada’s cinematography is the primary recipient, with the Maine, British Columbia and Vancouver locations looking awfully gorgeous in the new transfer.  Scream Factory has also provided a solid retrospective documentary featuring input by Miner, Pullman, and some of the special effects crew who talk about the admittedly impressive animatronic cow (I had no idea!) and sell the film well enough to make me second-guess my opinions on it, if only briefly.  Some nifty crocodile test footage is also included, along with a brief featurette made to sell the film in 1999, the original trailer, TV spots and a photo gallery.

LAKE PLACID probably would have been served better if Kelley had come in after the film had already been started in order to punch up the dialogue, as while television gives you a chance to establish characters over a long period of time, film isn’t nearly as forgiving.  The end result is a horror-comedy that’s neither particularly scary nor very funny, and while it has a share of interesting moments, LAKE PLACID never delivers on its promise.  That said, it’s certainly better and more ambitious than any of the SyFy creature features that have been churned out on the last few years, and fans of the film or giant monster pics in general should at least give it a try — Scream Factory’s Blu-ray is probably the best this film will ever look.