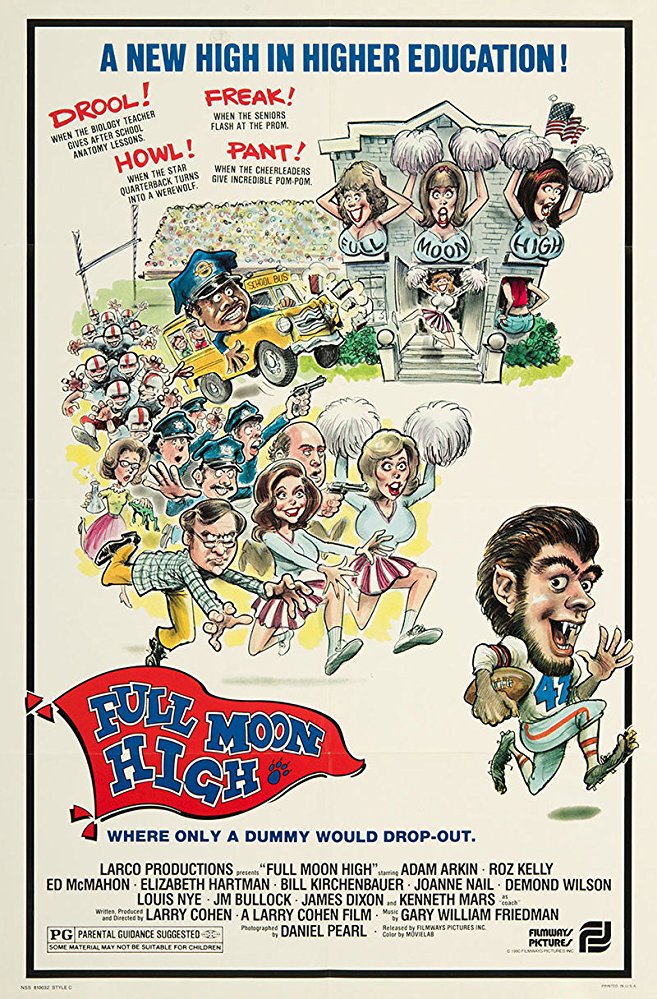 The service provided by home entertainment distribution companies like Arrow, Scream Factory, Vinegar Syndrome and Kino — to give new life to long forgotten and obscure old movies damned to the sands of time after going out of print, if they ever got an actual home video release to begin with — is a double-edged sword. For every genuinely deserving diamond in the rough that gets rediscovered (a la Arrow’s recent revelation of SCALPEL), there’s another release that was justifiably obscure. Even when they are made by a major director.

Which brings us to Larry Cohen’s long — and very deservedly — forgotten 1981 horror parody FULL MOON HIGH.  Made at his peak — when the idiosyncratic auteur was in the midst of making genuine classics, cult and otherwise, like IT’S ALIVE, GOD TOLD ME TO, Q: THE WINGED SERPENT and THE STUFF — it’s Cohen’s takeoff on the werewolf genre, filtered through his inimitably eccentric style. Except almost none of it works. It’s possibly one of the otherwise brilliant filmmaker’s worst efforts.

The film is a parody of the old ‘50s teen lycanthrope flick I WAS A TEENAGE WEREWOLF, but it’s proximity almost makes it more of a proto-TEEN WOLF. While forced to spend a week in Romania with his spy father (Ed McMahon — yes, that Ed McMahon), handsome and popular high school quarterback Tony Walker (Adam Arkin) is told by a fortune teller that he has the curse of the pentagram — and, sure, enough, as he’s wandering alone in the countryside on the night of a full moon, he’s attacked and ravaged by a barely glimpsed werewolf. Returning home, he tries to keep his new identity secret from his father, overzealous girlfriend (Roz Kelly) and teammates. When it becomes too much to bear, he quits school and runs away, drifting through the country for two decades, returning home — still as youthful as ever — to find his old high school in crime-riddled disrepair, and determined to win the big game, thinking it’ll reverse his predicament once and for all. 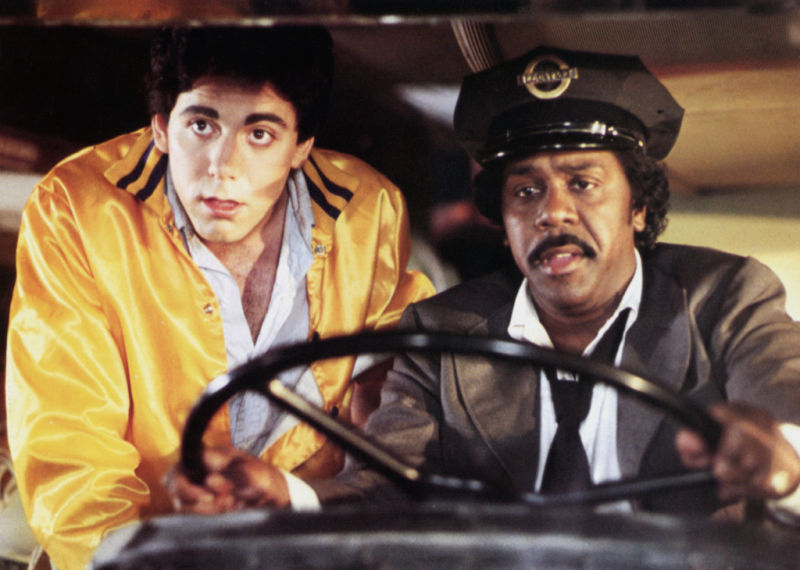 FULL MOON HIGH is one of the only straight comedies on Cohen’s resume, and he shows no faculty for the genre at all. Which is strange, because humor has been part and parcel of Cohen’s style, well integrated into his horror, thriller and blaxploitation pictures. But taking on a film that’s meant to be all humor, all the time, Cohen lands with a thud. Maybe it’s the fact that the comedy in a regular Cohen joint grows organically from the characters and situations, whereas FULL MOON HIGH is meant to be a strenuously wacky goof-a-minute parody, with absurdist jokes flung at the wall like spaghetti, seeing what sticks. Very little of it does.

The sheer fail rate of the jokes makes the movie an absolute chore to sit through, but being unfunny is not the only problem here. The movie is downright offensive. It’s Problematic with a  capital-P bad, and while I’m willing to give older movies some slack for ugly attitudes due to it being a different time and all, this goes beyond the pale even for its era. FULL MOON HIGH is incredibly racist, sexist, and homophobic, and hits its lows with several extended sexual assault jokes. No. Really. Sexual assault jokes. The words “sexual assault” are even used verbatim. There’s a mincing gay caricature of a  coach who struts naked into the boy’s locker room and is called “Coach Grab-Ass,” who later discusses the multitude of assaults a fragile new teacher endured at every single school she’s taught at… including the elementary school. Ho ho.

There’s an AIRPLANE-esque rat-a-tat quality to FULL MOON HIGH, and had the movie instead aimed for the character-etched humor of Cohen’s other output, rather than quantity-over-quality excess, it may have worked. But it all falls far too flat, which just makes the offensive jokes feel less subversive than just plain mean, and the inoffensive ones feel stale and dated. The film isn’t all bad, however. Adam Arkin, in one of his first major roles, shows an easy-going hangdog charm as Tony, keeping the film compulsively watchable despite the fact is simultaneously a chore to sit through. Arkin kinda looks like a burlier David Naughton, here, but sounds like David Schwimmer, and his deadpan, wryly put-upon junior-Borscht Belt demeanor makes the character more compelling than making him a bland, hunky teen-heartthrob type. But the best scenes — the only legitimately funny scenes — are stolen by his father, Alan Arkin, in a late-coming smallish role as a wisecracking psychiatrist trying to tame Tony’s inner beast. It’s only when the senior Arkin appears on screen that the film comes alive as only a Cohen film can. Until then, this film is for the dogs.

(The Blu-Ray contains a trailer and commentary with Cohen, but I can’t even bring myself to sit through this again to listen to it. FULL MOON HIGH is really for completists only.)